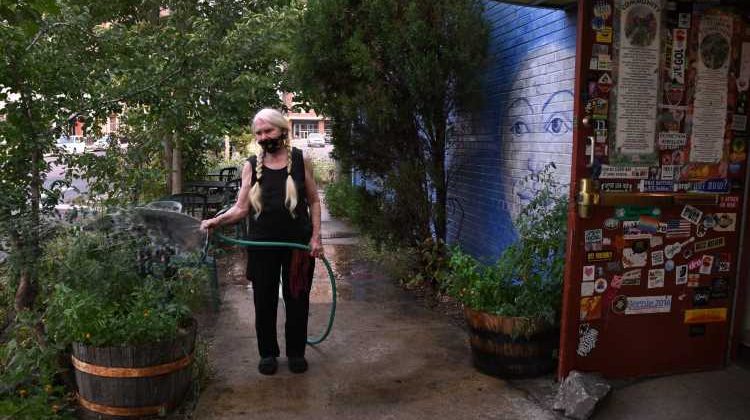 It’s a Friday night at the Mercury Cafe. On most summer nights, there’s usually a crowd in the dining room listening to live music under the twinkling fairy lights and a tango lesson in the ballroom upstairs. But this summer, in the middle of the pandemic, owner Marilyn Megenity watches a small handful of people “dancing like hippies” with masks on by themselves. It’s a much different sight, but seeing loyal customers always gives her hope.

“What will make the difference is the community support we’ve been given, which is awesome and humbling and incredible,” Megenity said.

The Mercury Cafe has been a cultural hub in Denver since 1975, settling in at its current location at 2199 California St. in 1990. The eclectic restaurant hosted everything under the sun — such as weekly poetry slams, astrology clubs, Democratic Socialists of America meetings, belly dancers, hip-hop lessons and jazz bands — until the restaurant closed its doors with the statewide shelter-in-place order in March.

In an interview with The Denver Post Wednesday, Megenity described going from a bustling cafe known for performances and its ambiance to navigating the world of to-go orders just to stay open as a restaurant.

Now, the Mercury Cafe is open, but only for dinner Friday, Saturday and Sunday, along with a Sunday brunch service. There’s still live music and performances, which started when it reopened once dine-in service was allowed to resume. Megenity said she’s “holding on by her fingernails.”

And as she makes ends meet with fewer customers and events, poets and other creatives who came up through Mercury Cafe have led the charge to spread the word about what she needs.

Megenity said it costs $600 a night to pay her employees and performers, before you turn on the lights or serve any food. Since restaurants have more business on the weekends anyway, she made one of many difficult decisions and cut back the Merc’s hours.

But one thing she won’t sacrifice is the quality of the food. The Mercury Cafe is known for its locally-sourced, organic ingredients, and the menu is as eclectic as the events, with enchiladas, burgers and pastas. Even as her revenue margins shrink, Megenity said she remains committed to making her restaurant as sustainable as possible.

The Mercury Cafe building may stand out with its two-story brick facade, starry green awning and dreamy mural of the moon at the entrance, but the space doesn’t come cheap, Megenity said. With two dining rooms and a dance hall, she can usually host 250 people downstairs and 350 upstairs, but now she can only host 100 customers total. She also has a small outdoor space with nine tables, and she hasn’t applied for a patio extension permit.

With property taxes, insurance and licensing, Megenity said she pays about $70,000 a year just to open the building to customers. She only has one more payment left in 2020, thanks to a GoFundMe that’s raised over $60,000 since April. But come the New Year, she doesn’t know if she can raise enough money to stay afloat in 2021.

The Merc’s dedicated customer base shows how revered the cafe is in Denver. Between in-person customers and donations from GoFundMe, Megenity said her loyal customers are getting her through the pandemic. And Colorado poets have been integral in the effort to save the Mercury Cafe, hosting livestream fundraisers, promoting the GoFundMe on social media and working with Megenity to pull the cafe through.

Poet Andrea Gibson has been one of the cafe’s most vocal supporters with their recent Westword op-ed, “When I Die, Scatter My Ashes at the Mercury Cafe.” Poets and other artists have tried to harness their creative energy to save the restaurant, but Gibson knows there’s still a big chance this Denver institution won’t survive the pandemic.

“I’m doing everything I can to spread the world,” Gibson said. “This is a business that I’ve watched so closely operate with so much clear integrity, and the idea of that not winning in the end, it irks whatever justice valve I have in my heart. It doesn’t feel right.”

Gibson, who uses they/them pronouns, said they saw spoken-word poetry for the first time at the Mercury Cafe, and 20 years later, they still get the same magical feeling from being in the space. It became a hub for art and activism in their life, and they’ve watched people all over the world come out to support the cafe in the pandemic.

And for many people, the Mercury Cafe is Megenity, who can’t help but express constant gratitude that the cafe has made it this far.

Subscribe to our food newsletter, Stuffed, to get Denver food and drink news sent straight to your inbox.