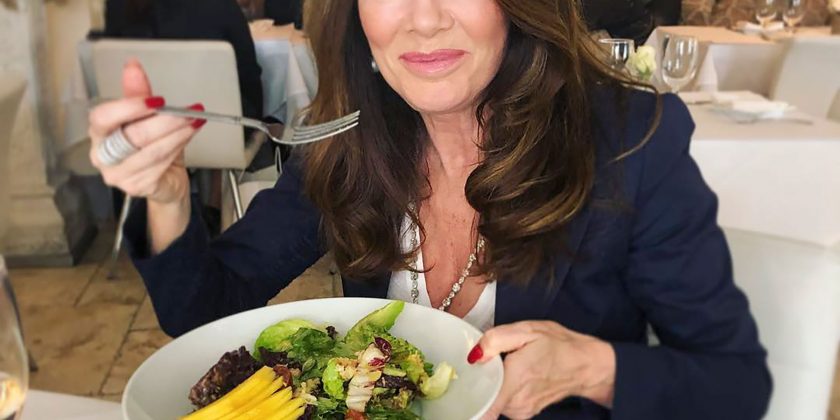 The Vanderpump Rules star ate a colorful and “delicious” salad while out to lunch at her Beverly Hills restaurant Villa Blanca.

Looks like the Cooking Channel host and her daughter, Ryan, 3, cooked up something magical! “The fairy soup is HOT! Ry and I are cooking up fairy soup today!!!,” the star wrote on Instagram.

Girls day! The actress and her Unbreakable Kimmy Schmidt costars went out for a special “Mole Women” lunch and captured this cheery moment.

“No better way to spend #BoozeDayTuesday than with some furry companions ??,” the morning show host captioned this adorable picture.

“Breakfast At Tiffany’s ☕️Ching Ching (cheers!) to the holidays & spending time with familia! Love my baby girl #JetMarie – not only is she stunning, she’s also smart, so kind & oh so stylish… peep her Audrey Hepburn inspired black dress & pearls! Ha. So chic.,” wrote the actress on this too-cute post with niece Jet Marie.

“This is how my birthday ended…,” the actress captioned this photo of her nearly finished birthday cake—must have been tasty!

“Pizza is a staple. Leopard is a neutral,” the actress posted.

The Chopped star and chef-partner of Point Royal at the Diplomat Beach Resort in Hollywood, Florida was busy carving his peppercorn crusted prime rib eye for Miami Heat players on Tuesday. Zakarian was celebrating the launch of his takeover at the VIP lounges in the AmericanAirlines Arena.

“Reading this morning’s emails,” the Riverdale star captioned a silly shot while at breakfast.

The Top Chef host made fans jealous on Instagram when she recorded herself enjoying a burger from an In-N-Out in Los Angeles.

The Hobbs and Shaw actor defended his choice to put pineapple on pizza after his trainer instructed him to amp up his carb intake: “Keep in mind, I’m the guy who likes to put tequila and brown sugar in my oatmeal, so pineapple on my pizza is MY JAM – with ham,” he wrote.

The former Glee stars kicked off the European leg of their LM/DC tour with pints of Guinness in Ireland. “Cheers DUBLIN! Thank you for an absolutely amazing night,” wrote Michele.

“Yes to everything Christmas,” wrote the model on an Instagram photo of herself enjoying a hot beverage in the cold winter weather.

The actor and his husband David Burtka had dinner at Food Network star Geoffrey Zakarian’s The Lambs Club in New York City, which just debuted a brand new menu under executive chef Galen Zamarra. “The new menu is stunning. Neil ordered the mushroom soup and after I finished my starter I ordered second one for myself!!” Burtka wrote on Instagram.

The actor posed for a silly photo taken by his friend, actress Julianne Moore, at a restaurant in Rome.

The action star takes his training very seriously – especially as he prepares for his new movie Hobbs & Shaw. “Midweek carb up and takin’ these sexy pizzas to pound town,” he wrote.

The British singer has been adventuresome with escargot and live Japanese seafood in the past, but he recently decided to change up his meal choice. “Vegan for a day,” he wrote in an Instagram post.

“Sometimes you wanna talk about it, other times you just wanna eat ice cream,” wrote the model as she gets ready to eat three pints of McConnell’s Ice Cream.

“Nyc bound with this lil one. ps I’m addicted to those starbucks egg white thingys and just introduced syd and now she’s hooked,” wrote the singer on an Instagram photo with her sister Sydney Ray Bass.

“The world is mess. Eat as much pizza as possible,” the cookbook author wrote during lunch at Mama’s Too in New York City with her husband, Jerry Seinfeld.

The actress and her costars couldn’t resist snagging some ice cream “sammies” from the Coolhaus Ice Cream truck on the set of Splitting Up Together.

The Victoria’s Secret model is always chic, even while she’s out grabbing a bite. “I know Guac is Extra!,” she wrote in an Instagram post from her trip to Miami.

“All sorts of chocolate goodness in this cup,” wrote the singer turned chef as she sipped on some hot cocoa at Dark Sugars in London.

The iconic fashion designer and the supermodel sipped champagne on their flight to the GQ Awards in Berlin, Germany.

The fashion designer and former Hills cast member enjoyed a group dinner with her “ride or die crew.”

The actress sat down with cast mates during filming of The Big Bang Theory and took full advantage of the set’s delicious props. “If you ever wanted to know what happens during our ‘dinner’ scenes, here are two videos that show the before and after. I always forgo lunch if I know we are shooting an eating scene like this one lol,” she wrote in an Instagram post.

The Real Housewives of New Jersey star stopped by Pizza Love in Wyckoff, New Jersey before heading to Radio Andy, where she guest-starred in a radio segment and surprised the crew with a heart-shaped chocolate strawberry dessert pizza.

The actor was surprised with more Double Stuf Oreos than he can handle at once. He expressed his happiness on Instagram when he wrote, “This is easily one of the best days of my life.”

Since Election Day landed on Romijn’s birthday this year, the couple commemorated it with a family dinner after hitting the polls. “We celebrate our Scorp’s @rebeccaromijn BDay by VOTING!” O’Connell wrote.

The Keeping Up with the Kardashians star kicked off her birthday in the clouds with a surprise cake from her friend, fashion designer Tommy Hilfiger. “Butter Cake at 35,000 feet!!!!” she wrote on Instagram.

“Sushi Monster,” the To All the Boys I’ve Loved Before star wrote on Instagram.

The actress and bride-to-be sipped a mojito during her bachelorette celebrations with friends in Amsterdam. “A day in the life of… #bachelorette,” she wrote on Instagram.

In attempt to celebrate National Sandwich Day, the actress grabbed a hotdog and a seat at a soccer game, where she asked, “Is a hotdog a sandwich?? This is a heated debate in our family.”

Find out what other celebrities think about the controversial question here.

The actor celebrated after his friend Kevin Bridge’s comedy show in Dublin with a pint of Guinness.

“The taste of fall as the last of its brightness slides across your tongue,” the singer wrote as she nibbled a small bunch of grapes during her trip to Napa Valley.

The music mogul and his wife spent a wine-filled evening at Salt Bae’s Nusr-Et Steakhouse in Miami. “Last night dinner wit HONEY,” he wrote on Instagram.

“The pour is strong with this one,” wrote the model, while enjoying a glass of red wine on a bright Sunday afternoon.

The actress and talk show host grabbed a cupcake from the “Cupcake ATM” at Sprinkles Beverly Hills after church.

The Game of Thrones alum slurpped back oysters at Hemenway’s Seafood Grill & Oyster Bar in Providence.

The actress celebrated the Day of the Dead with a colorful sugar cookie.

The Game of Thrones actress was surprised with a very fitting dragon cake for her 32nd birthday. “I felt like one very lucky chica to have been sent so much love… (and chocolate),” she wrote.

With a slice of pizza and a beer in hand, the actress cheered on the Boston Red Sox from her couch during the World Series.

While devouring a rack of saucy ribs, the American Idol host joked on Instagram that “now it’s wet wipes I’m looking for #TheNextIdol.”

The two shared kisses over cannolis and other pastries during a “quick, light breakfast” at Mike’s Pastry in Boston.

“HOME = ONESIES AND CHOCOLATE CHIP COOKIES AND MOVIES!!!!!!!!!!” wrote the singer during a pre-Halloween get-together with friends.

The talk show host wrapped up his week of filming (and eating) in Brooklyn with dinner at Hometown Bar-B-Que. “Still eating,” he wrote.

“Saturdays are for baking biscuits!” wrote the actress as she takes another weekend to flex her baking muscles, while promoting her new lifestyle book Whiskey In A Teacup.

Food for thought? While sipping a drink in the soda aisle, the actress quoted late writer, Virginia Woolf, writing, “‘What is the meaning of life? That was all- a simple question; one that tended to close in on one with years, the great revelation had never come. The great revelation perhaps never did come. Instead, there were little daily miracles, illuminations, matches struck unexpectedly in the dark; here was one.”

“A long time ago I worked at a pub in Galway called Busker Browne’s. They were nice enough to invite me to come back behind the bar and pour a ? of @guinness when I stopped by. If you find yourself in Galway I highly recommend this spot for a pint!,” wrote the American Horror Story actor during his trip to Galway, Ireland.

The Italian-born chef decided to start her holiday pastry baking early. Under her Instagram post, she wrote “Holiday pastry planning @prontobygiada…. which Italian pastry is your fav?? #takingvotes #prontobygiada.”

The Peking duck at the upscale Chinese restaurant Mr. Chow got a thumbs up from the actor.

The pastry chef took a bite out of a slice of bacon “Lady and the Tramp style” with a cute fan at the 2018 New York City Wine and Food Festival, which raises money for No Kid Hungry.

The actress showed off her “favorite breakfast” on her Instagram story. The completed dish includes an organic egg, kale, terroni peppers, and cheese on an Ezekiel English muffin.

“Had one of the best lunches ever!” the country singer wrote of her meal at Quality Italian in New York City. “This is not pizza, this is a massive chicken parm cutlet and it was soooo good! Also the bucatini with mussels was fabulous #italiangirl.”

The TV host embraced the leafy season with a weekend of apple picking with friends.

The chef and mom of three was in need of a double dose of bubble tea to start her morning.

The country star enjoyed a meal with his furry friend, Edgar, in Providence, Rhode Island. “You’re gonna give me that bacon or else….,” he wrote.

While sipping some vino, the Jersey Shore star announced that she parterned up with her best friend Joey Camasta to host a YouTube cooking show. Cooking in the Crib with Snooki & Joey premieres Oct. 18.

“Feeling better after surgery. Ice cream helps,” the rock star wrote on Instagram, while recovering from a hand surgery.

“Side Eyes & Pie,” the supermodel posted.

The Orange is the New Black star happily posed with her “#PerfectYellow” hard-boiled eggs.

In between preparation for the 2018 Victoria’s Secret Fashion Show, Hunt sat back and enjoyed a simple glass of wine.

The former Glee star showed off her engagement ring while sipping a cup of tea.

“That one time I failed miserably at making my famous Baked Brie. Instead I made it explode. It happens people,” the actress wrote of a recipe from her new lifestyle book Whiskey In a Teacup.

Lopez traveled in style from Los Angeles to New York City with a cocktail in hand.

“TOKYO?? I adore this city,” the newly-married model wrote on Instagram as she indulged in some noodles.

“That time @zooeydeschanel and I celebrated Canadian thanksgiving while shooting a fake American thanksgiving,” Simone said on Instagram.

The Foodgod satisfyed his craving for the “old school drive thru spot” Superdawg while in Chicago.