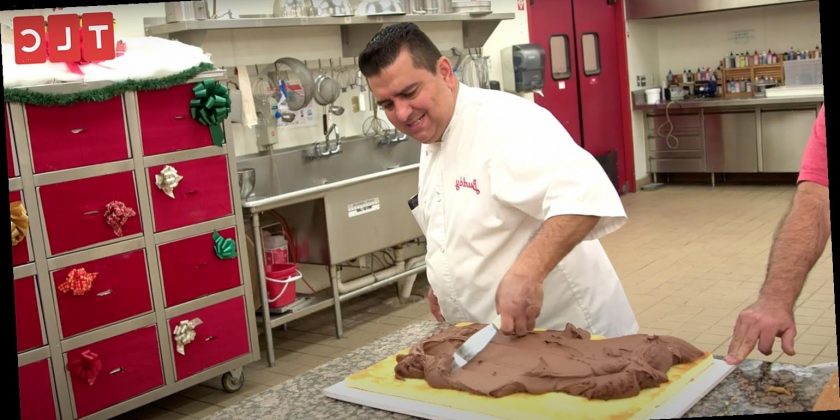 Buddy Valastro is back in the kitchen.

In an exclusive clip of TLC's upcoming special, Buddy Valastro: Road to Recovery — which airs tonight — the 43-year-old baker and television star heads back to the bakery months after a freak accident severely damaged his right hand.

At the beginning of the clip, Valastro says that his team and family have stepped up and supported him on his return. The Cake Boss star also shares that he's "not the kind of guy who wants to just design" his work, he also wants to "touch it" and "feel it."

"I wanna be in the game, I don't wanna be on the sidelines watching," Valastro adds before he reveals that he has "about 15 percent" of his strength back and "can't squeeze or grip things too much."

"It's kinda like an old boxer who still thinks he can fight. You know, like you got that will, you got the heart, but you don't got the tools right now," he then notes towards the end of the almost two-minute-long clip as he visibly struggles to ice a cake. Buddy Valastro: Road to Recovery follows Valastro and the "dramatic events as they transpired in real-time with footage captured immediately after the incident," per a press release.

"It’s a long, emotional journey, from Buddy’s multiple surgeries, to his family anxiously waiting at the hospital, to grueling physical therapy, and to his first days back at the job," the release adds. "As business deadlines loom, commitments for over-the-top cakes stack up, and the holiday season around the corner, the stakes couldn’t be higher. But above all, Buddy faces the ultimate question: Can you still be the Cake Boss if you can’t make cakes?"

Valastro's injury occurred earlier this year when he was spending quality time with his family at their in-home bowling alley. After there was a malfunction with the bowling pinsetter and Valastro went to fix the problem, his right hand became lodged in the machine and a metal rod impaled his hand three times between his ring finger and middle finger.

"I looked at my hand and blood was gushing everywhere. It looked like a Halloween movie," Valastro told PEOPLE in September. "[It] was the worst pain that I've ever encountered in my life."

Last month, the world-famous baker opened up to PEOPLE again and revealed how his recovery is slow but steady.

"I was in a really bad place mentally in the beginning,” he said. "I kept waking up to night sweats of the nightmare of it happening, and the pain."

But these days, Valastro says he is "trying to think positive," though he admits it is a struggle. With numbness and limited motion in two of his fingers, Valastro can’t easily button his pants or cut his food.

One victory: “I can hold a fork like a little kid would,” he says. "So I've been trying to use it a little bit more, but just in different settings and different times. You don't realize how much you can really move your hands in different directions. You take for granted certain things.

Follow Buddy on his journey to healing on the upcoming two-hour TLC special Buddy Valastro: Road to Recovery on Wednesday, Dec. 23 at 9 p.m. ET/PT.