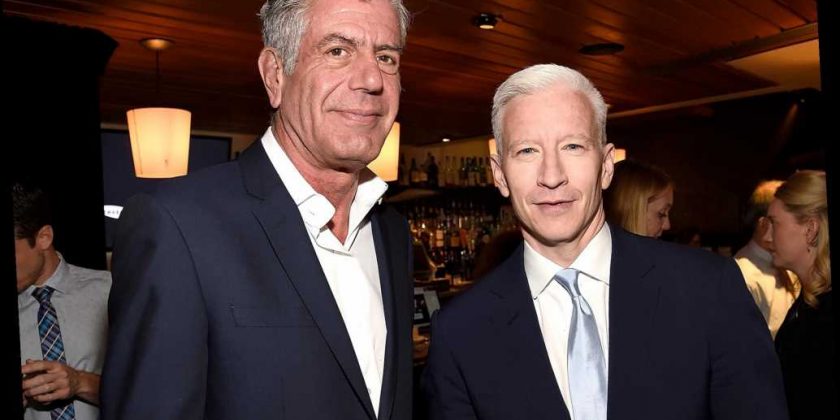 Anderson Cooper is reflecting on his memories with late friend and famed chef, Anthony Bourdain.

For Thursday’s episode of Anderson Cooper Full Circle, the news anchor played a clip from 2015, in which he and Bourdain, who died by suicide in 2018, whipped up a batch of "Sunday Gravy."

“Obviously this is a holiday that revolves around food and family — both the family you're born with and the family that you choose or make for yourself, your friends and your loved ones,” Cooper began for the Thanksgiving day show.

“I was proud to call Anthony Bourdain a friend. Some of my favorite memories of him beyond his remarkable body of work on CNN, and other networks before us, was being with him in the kitchen,” he continued. “From time to time he'd return from his travels, tell me about his adventures and film the segments for my program and he’d sort of try to teach me how to cook.” Cooper also joked that Bourdain’s palate may have been a bit more advanced than his own.

“He would also sort of torture me with dishes which I would normally never eat in a million years, and he loved to watch me squirm as I bit into like a pig’s aorta,” he said, laughing. “I’m not sure why that was necessary but he certainly enjoyed it. Some of them actually tasted really good but not so much the aorta — it’s crunchy like you might imagine.”

Bourdain hosted Parts Unknown on CNN from 2013 to 2018, in which he traveled around the world tasting and cooking new foods. Cooper described the late TV host as “a citizen of the world,” but their time making "Sunday Gravy" together was mostly an homage to Bourdain’s upbringing in New Jersey.

“In Anthony’s 61 years he visited more than 80 countries, many of them multiple times, and he was really a citizen of the world, as well as a guy from New Jersey,” Cooper said before playing the old clip, in which the pair discussed the origins of the red sauce in America.

“It came from that great diaspora of mostly impoverished Italians from the Naples area and Sicily who came over and discovered this wonderland of prosperity, relative to what they’d grown up in,” Bourdain explained as he cooked around Cooper.

At the end of the old clip, Cooper came back on to address viewers. “Anthony Bourdain, it is so great to hear his voice,” he said. “He is so, so missed by so many.”

If you or someone you know is considering suicide, please contact the National Suicide Prevention Lifeline at 1-800-273-TALK (8255), text "STRENGTH" to the Crisis Text Line at 741-741 or go to suicidepreventionlifeline.org.