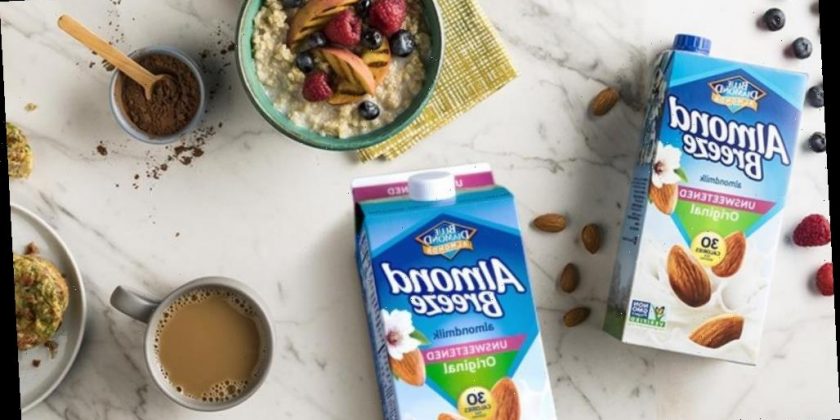 Maybe dairy doesn’t agree with you these days. Maybe you don’t love the idea of drinking milk that nature intended for baby cows to consume. Or maybe you just prefer your cereal with something that’s got a lighter, sweeter taste. Whatever your reason is for buying almond milk, you’re certainly not alone. Almond milk is now a billion-dollar industry (per CNBC). But not all almond milks are created equal, and these days, the non-dairy case in the supermarket offers nearly as many choices as the spice aisle. Do you want sweetened or unsweetened? Vanilla, chocolate, or even eggnog flavored? Blended with coconut or cashew milk or just straight-up almonds? And what type of organic certification are you seeking? It’s enough to drive a person nuts!

While almond milks may look similar when you pour them in a glass, take a look at the ingredients of different brands and blends — you’ll see a staggering variety. Don’t be overwhelmed. The information here is actually your roadmap for which almond milks are best for your morning smoothie.

How to pinpoint the perfect almond milk for you

On the minimalist end of the ingredients spectrum, we have Malk, which contains just filtered water, organic almonds and salt. This sounds so wholesome — but if you’re drinking almond milk as part of a vegetarian or vegan diet, you actually want to choose a blend that’s fortified with vitamins your diet may otherwise be lacking in some nutrients, per Eat This, Not That.  In contrast, one almond milk that may be taking things too far in the opposite direction is Almond Dream, which contains about a dozen ingredients, including carrageenan. This common food additive has been approved by the FDA as safe. But experts have raised some doubts about whether this popular thickening agent is linked to gastrointestinal problems (per Chicago Tribune).

So clearly, you’re looking for a happy medium. You want an almond milk that’s been fortified with vitamins but contains absolutely no trace of carrageenan. And you probably want it to taste good, too, while you’re at it. And maybe not be terribly high in sugar and calories? If that sounds like you, So Delicious Almondmilk Beverage Unsweetened is a clear contender. It won a Food52 taste test: “”Yum,” said one tester. And another said: “Really nice!!” and “Tastes like an almond grove.” With a similar nutritional profile, supermarket favorite Almond Breeze, got rave reviews for taste as well — and yes, it is also free of carrageenan.