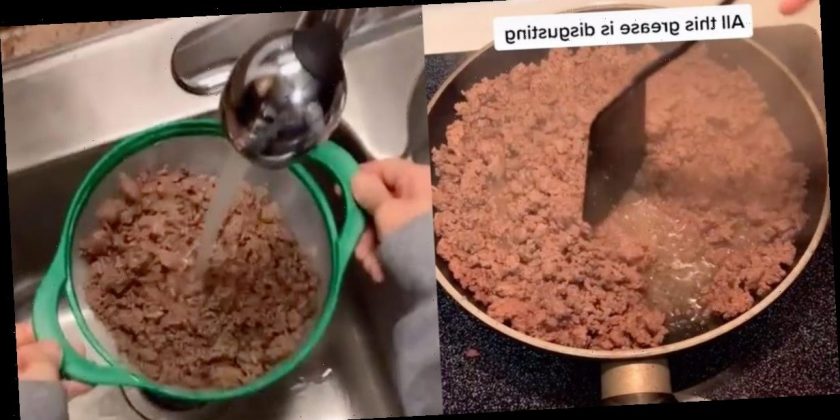 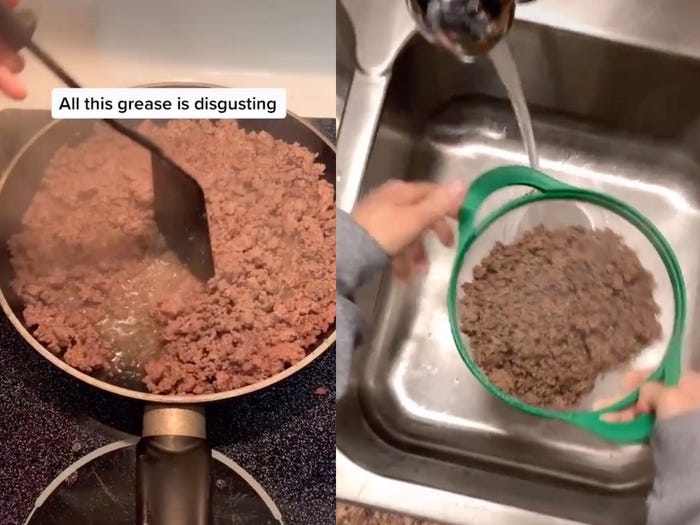 A TikTok user stirred up a heated debate after revealing that she drains and washes her ground beef in the sink while cooking the meat.

Emily Harper recently posted a clip of her "kitchen tip," saying it was a hack that she had learned in her nutrition class "a couple years ago."

The video shows Harper taking raw ground beef out of a plastic bag and putting it in the pan, breaking it up with a spatula as the meat starts to brown.

"All this grease is disgusting," she writes in a caption for the clip. "So get rid of it!"

Harper drains her pan in the sink, then transfers the meat to a sieve and rinses it before putting it back into the pan to finish cooking.

"Look at the difference," she writes at the end of the clip, which has racked up 3.9 million views at the time of writing.

Harper's video was reshared to Twitter, where it caused even more of an outcry. While some commenters defended her method and even said they did the same thing (at least the draining part, if not the rinsing), a majority criticized her and said the meat looked dry and flavorless.

"It's obviously washing away flavor," Carter told Insider. "It's a real, real no-no for me. I would never, ever wash the meat."

Carter also pointed out that the liquid in the pan is just a mixture of fat and water from the meat.

"I would leave the fat in, the fat for me would be a big part of it," he added.

"Don't do it, don't wash the meat," she said. "Once you splash water onto the meat it spreads the bacteria around your sink and countertops. It's not necessary, it's not helping you in any way. You're adding water to it for nothing."

"That's also an absolute no-no in the kitchen," he said. "That's only going to block the sink and cause you a real big headache."

But Harper is clearly taking the criticism in stride, even posting a follow-up video on TikTok.

"People acting like they never pour grease down the drain in my last vid. Calm down I rarely do it," she wrote in the caption.

People acting like they never pour grease down the drain in my last vid. Calm down I rarely do it 😂 ##Fyp

Harper did not immediately respond to Insider's requests for comment.