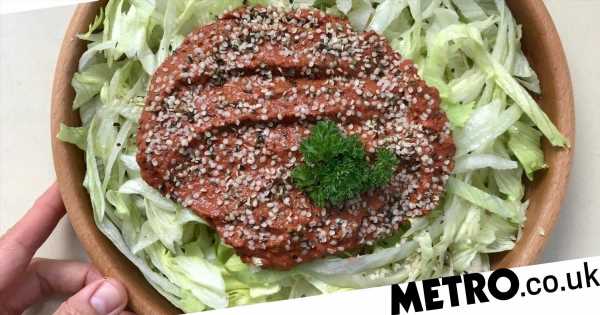 First the foodie influencers attempted to replace pasta with courgetti, and we, as a society, allowed this.

Supermarkets began selling their own shredded courgette next to their fresh tagliatelle. Restaurants offered a courgetti swap for anyone cutting carbs.

Courgette is not pasta. We know this. And yet we let courgetti happen.

So is it any wonder that another food influencer has decided to make ‘lettucetti’ a thing?

Lettucetti is the creation of Ullenka Kash, a health coach, mum, and influencer with more than 126,000 followers on Instagram. Ullenka only eats raw fruit and veg – nothing else – and lettucetti is one of her many raw vegan versions of popular meals.

As the name probably gives away, lettucetti is just… shredded lettuce. Top that with sauce (a raw, meat-free and dairy-free sauce, to be clear) and it’s a tiny bit like spaghetti bolognese… apparently.

Ullenka shared this creation on Instagram, where it was swiftly slammed by people who took offence to the YouTuber referring to the dish as ‘Raw Vegan Lettuce Spaghetti a’la Bolognese.’

Another commented said: ‘This is a war declaration against all Italian culture and everything pasta represents for us.’

The comments section of the Instagram post also features a lot of angry Italian and vomit face emoji. Of course.

Despite the backlash, Ullenka continues to refer to her shredded salad leaves as lettucetti and the variations of raw mushroom paste as a bolognese sauce.

But she tells Metro.co.uk she is not ‘trying to replace pasta with lettuce’.

‘I am making a lot of raw vegan versions of popular foods, to make familiar what’s unfamiliar,’ Ullenka tells us. ‘To follow high raw vegan lifestyle successfully, you’ve got to get a bit creative, with your dinners especially.

‘I started to make lettuce rolls, lettuce sushi etc. Lettuce became my base for many different meals. I discovered how many things I can actually do with it!

‘One day I wanted something quick and filling, so just decided to blend all of my add-ons and make it very simple – just lettuce and sauce.

‘Since I cut lettuce into stripes, it reminded me a lot of a spaghetti! So I started to call it spaghetti salad or lettucetti or bolognese salad etc.

‘I am not Italian and spaghetti for me is a symbol of pasta with sauce, something that you can spin on fork and enjoy a tasty bite easily.’

‘For someone who doesn’t eat meat, who doesn’t eat typical vegan cooked food, it does taste Italian, Mediterranean and has the saucy satisfying taste,’ she explains. ‘I made this recipe very spontaneously, without the intention for it to taste exactly like a Bolognese sauce does.’

Since all the outrage, however, Ullenka says she’s working on making her sauce taste more like the original.

While she claims lettucetti isn’t a replacement for pasta, she does suggest people try it when craving spag bol on a raw vegan diet.

‘I used to love it and I just can’t (don’t want to) eat regular spaghetti,’ Ullenka tells us ‘I remember how heavy in the stomach spaghetti feels. Well, this is not happening with my version of it.

‘I can eat any amount that I want and keep a flat stomach and great energy.’

Ullenka has served the meal to her friends and family, who she says absolutely love it. She’s been feeding her children a raw vegan diet in 2014, claiming that meals of chopped vegetables and entire watermelons have ‘healed’ her daughter’s eczema and her son’s autism.

As you’d expect for someone who believes a raw vegan diet can ‘heal’ autism (a claim with no scientific backing and that suggests autism is something to be ‘cured’), the case of lettucetti is not the first time Ullenka has been criticised online.

After claiming to have treated her daughter’s eczema and son’s autism with a fruitarian diet, Ullenka began to share recipes and guides online before writing an eBook, The Fruit Cure, and offering fans a ‘Healing Program’ to help them make the transition to an entire raw diet.

Ullenka is used to people calling her ‘dumb’ online but is happy to ignore the criticism and keep making and sharing meals that she enjoys – lettucetti included.

‘I do not respond to all of the comments,’ Ullenka tells us. ‘The discussion is pretty hot. I tell them how I truly think and feel about it.

‘I accept that some people will not agree with me and may continue to be upset. We are often afraid of something we don’t know or don’t understand.

‘To me the way I use the word “spaghetti” is an eponym, not the direct meaning of the term spaghetti. Each invention has its fans and haters, those who doubt or critique.

‘But I continue to be myself and I enjoy what I do – I am just planting the seeds and go to the next place.

‘I am helping people to find solutions for their health issues and one of my methods is to use “replacement” meals during the transition time in their diet, which helps to satisfy cravings but also to make the change slowly, so the body has time to heal.

‘Replacement meals are a great way to change old habits and to open up to try new things. I make apple fries, sweet potato fries, lettuce spring rolls, lettuce sushi, no-chicken soup, all kinds of things that people know, but they seem to keep having issues if they continue to eat the original.

‘With replacement meals they find a way to let go of old and introduce the new. After some time, we change the way we think and it is much much easier.’