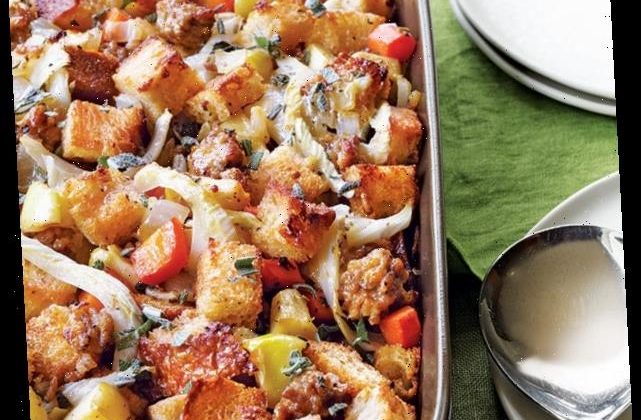 The chunks of stale sourdough bread soak up the sweet, spicy and and savory flavors in the most glorious way. Get the recipe HERE.

We like to think this recipe from Chungah Rhee, the blogger behind Damn Delicious, is Simon and Garfunkel-approved: It’s made with parsley, sage, rosemary and thyme. Get the recipe HERE.

We know, vegans: Thanksgiving can be really tricky when there are platters full of turkey, buttery mashed potatoes and creamed corn. But you can happily indulge in this delicious vegan stuffing from actress Kristen Bell. The wild grain rice and meaty mushrooms have all the satisfaction of traditional bread- and sausage-filled stuffing. Get the recipe HERE.

Leave it to chef Emeril Lagasse to take the traditional stuffing up a notch. Flavored with his blend of creole spices and smoked andouille sausage, his recipe is a Thanksgiving winner. Get the recipe HERE.

Sally Quinn, PEOPLE Food contributor and blogger behind Sally’s Baking Addiction, calls this stuffing “a big plate of Thanksgiving hugs.” And who are we to argue? Get the recipe HERE.

If you haven’t used your slow cooker yet this fall, this stuffing is the perfect way to break it in. Just throw all the ingredients into the machine on Wednesday night, and wake up Thanksgiving day to a fully-finished dish. Get the recipe HERE.

Food Network star Aarón Sánchez’s says his spicy, Mexican-inspired dish is “a mix of flavors that makes it a must-have.” Get the recipe HERE.