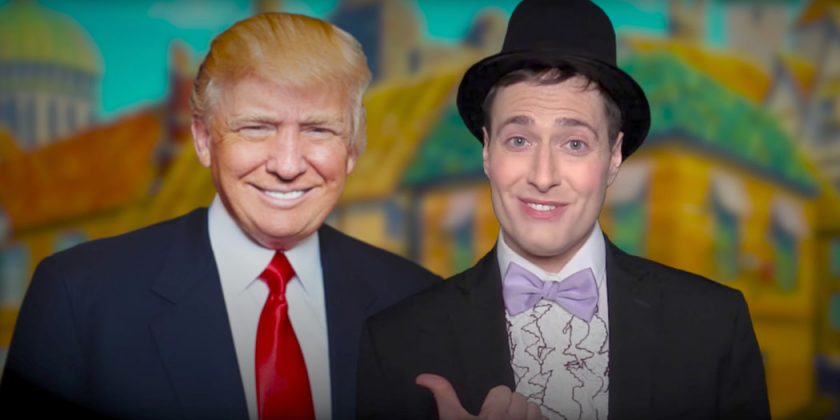 The YouTube personality Randy Rainbow was so embarrassed about asking his cabdriver to take him to the Trump Hotel in SoHo on Tuesday that he pretended he was a tourist.

“I used a phony British accent,” he said.

But the parody-singing, Trump-bashing satirist, who has racked up nearly 650,000 followers on Facebook, including RuPaul, Debra Messing, Armistead Maupin and Stephen Sondheim (he sent a fan letter), had no reason to worry about being recognized when he stepped into the dark and narrow lobby.

“Excuse me, we need that seat,” a woman told him the minute he sat down in his dark sports coat, button-down and respectful trousers. “We’re taking a picture of my family.”

Mr. Rainbow (yes, that’s his real name) stood up and fled. “See,” he said. “I just got here and I’m already being bullied.”

He took an elevator upstairs and found a place to sit in a poolside lounge by a big, trickling marble fountain surrounded by guests relaxed in various states of dress. “I would definitely not do well on the staff with the people this place attracts,” he said.

Mr. Rainbow, 35, who uses his own video equipment, home computer and wit for his politically sassy videos — in which he pretends to interview and insult the president and his coterie before breaking into song — took a moment to look at a headline in The Washington Post on his phone. “Jared Kushner finally spoke,” he read. “The internet can’t stop mocking his voice.” 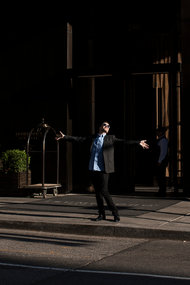 He put in his earbuds and listened to the video while cocking his head like a myna. “He sounds like a boy giving a bar mitzvah speech,” he said in a voice that can sound both boffo and feminine when he belts. “But it’s good to know that we can sing in the same key in case we have to do a duet.” He also agreed that he and Mr. Kushner resemble each other.

“News like this is why I can’t ever have a day off these days,” he said.

Although Mr. Rainbow has been making comic videos for seven years, his YouTube channel took off with Mr. Trump’s presidential bid; his Facebook following went from 12,000 to half a million soon after.

A sample joke from one of his fake Trump interviews last August: “People magazine is calling you and Vladimir Putin the hottest celebrity couple of the summer. Are you guys dating and when did the relationship start?” Or this zinger in a recent video in response to Mr. Trump calling James Comey a showboat: “Those are pretty harsh words coming from the Titanic.”

Now Mr. Rainbow is in high demand. He hosts shows and gay pride events, and takes some of his most popular videos on the road, including his fake interviews with Ivanka Trump (he calls her Binaca) and Melania Trump, which he made after the “Access Hollywood” locker-room-talk tape was leaked (bringing him 7.5 million views on Facebook). He also mocked Mr. Trump’s use of the word “braggadocious” during one presidential debate by setting it to “Supercalifragilisticexpialidocious” (31 million views to date).

“And Perez Hilton is having a party on Saturday,” he said.

How did this benign-seeming community college dropout come to make himself so indispensable that The Advocate, a gay newsmagazine, and Dan Savage have suggested that he was the best thing about the 2016 election?

He started by writing skits for himself as a child in Florida, where his father, Gerry Rainbow, was a musician and talent booker. He went to theater camp and was so good in his high school musicals that it kept him from being bullied.

“But it was really my grandmother who was the biggest influence because she’d talk back to the celebrities and politicians on TV,” Mr. Rainbow said. “She was a combination of Joan Rivers, Elaine Stritch, Betty White and Bea Arthur rolled into one.”

Too shy for cattle-call auditions when he moved to New York in his early 20s, he started blogging and then making videos while he held various jobs, including hosting at a Midtown Hooters. “The men who came in the door saw me and always looked so disappointed,” he said.

He first struck viral video gold in 2010 with “Randy Rainbow Is Dating Mel Gibson,” in which he used Mr. Gibson’s curse-filled rant to a former lover. Mockery of political personalities like Rick Perry followed. As the dance captain of a Boy Scout troop, Mr. Rainbow rings the doorbell of the former Texas governor to sell cookies and makeup and show off his merit badge for not eating carbs.

While he isn’t rich or Hollywood famous (he still makes the videos alone, in his studio apartment in Astoria, Queens), and can’t help being a little resentful of web celebrities who have bigger followings but do very little, he’s happy enough. Thanks to touring, hosting, performing (an Orbitz commercial and the Tony Awards) and writing gigs (for Kathy Griffin and others), he doesn’t have to have a day job anymore.

“Plus, everywhere I go people thank me,” he said. “Well, except here, but instead of being upset that nobody knows me at the Trump Hotel, I should probably be grateful.”

When it was time to leave, he seemed relieved. A stroll up Varick Street, past the Big Gay Ice Cream Shop and businesses with rainbow flags that seemed to be calling out his name, did not attract any fans. “Are these people even gay?” he asked.

Thankfully, the well-connected guests at a pre-Pride party given in Greenwich Village by Maneesh Goyal and James LaForce were far more responsive. Mr. Rainbow walked in the door and was accosted. “You are everything, and I’m in awe,” one man shrieked. “My boyfriend will be so jealous I met you,” another said.

As they took selfies with him like star-struck teens, Mr. Rainbow, who is single, grabbed a cocktail, chatted with an ongoing line of well-built and well-moisturized admirers and relaxed into his role of gay cult hero.

Jared, it seemed, would have to wait.