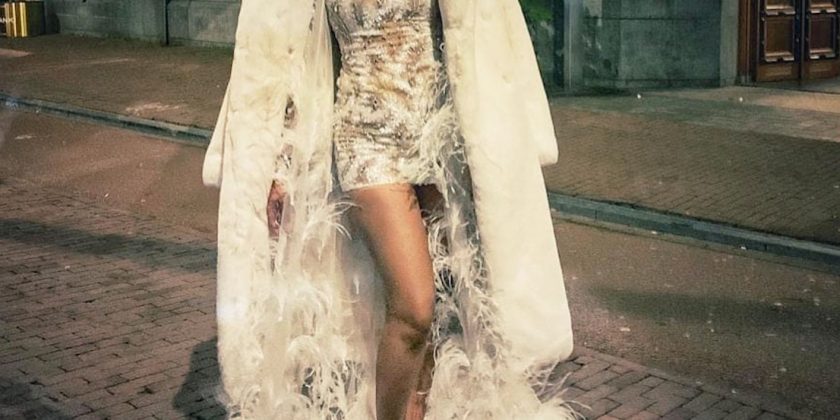 Ever since Priyanka Chopra and Nick Jonas announced their engagement, she’s been embracing a bridal-like wardrobe. And for her epic bachelorette party in Amsterdam, she kept her bride-to-be theme going in a series of show stopping white dresses.

Chopra kicked off the weekend in a white sweater dress with feathery appliqués, a white coat and over-the-knee snakeskin boots.

Then she switched things up on the second day, ditching white and opting for an orange and pink sweater with a plaid skirt. But she kept the bachelorette vibes going by accessorizing with a bride-to-be sash and fascinator.

And on her final night out, she upped the ante in a sparkly white dress that gave off serious wedding dress vibes. She wore a long-sleeve embellished Georges Chakra mini dress with feather detailing and matching feather duster.

She was joined by friends, family and soon-to-be family during her wild weekend out. Nick’s older brother, Joe Jonas‘ finacée, Sophie Turner, celebrated with Chopra, and even got a piggy back ride from the bride-to-be, which they documented on Instagram stories. They also matched in coordinating “Hungover” sleeping masks, which they modeled on Instagram.

Chopra and Nick may tie the knot before Turner and her fiancé, despite the fact that Chopra got engaged in July 2018 and Turner announced her engagement in October 2017.

“Even though Joe’s been engaged longer, it wouldn’t be surprising if Nick got married first,” a source told PEOPLE in October. “They’re not really competitive in terms of who’s going to get hitched first.”

“Everything’s going really, really well with Priyanka,” the source continued. “Nick will do what he wants to do.”