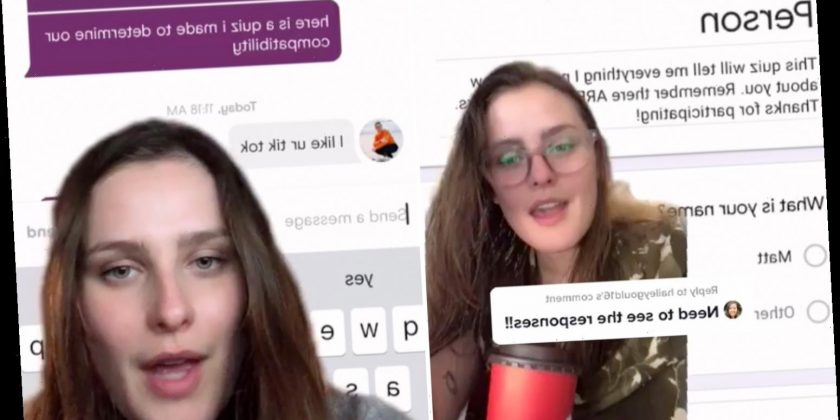 ONLINE dating has opened many doors for singletons looking for love, and with that means a sea of potential candidates to choose from.

To help narrow down her options, a Canadian woman makes her Tinder matches take a compatibility test and asks VERY specific questions to test their "judge of character". 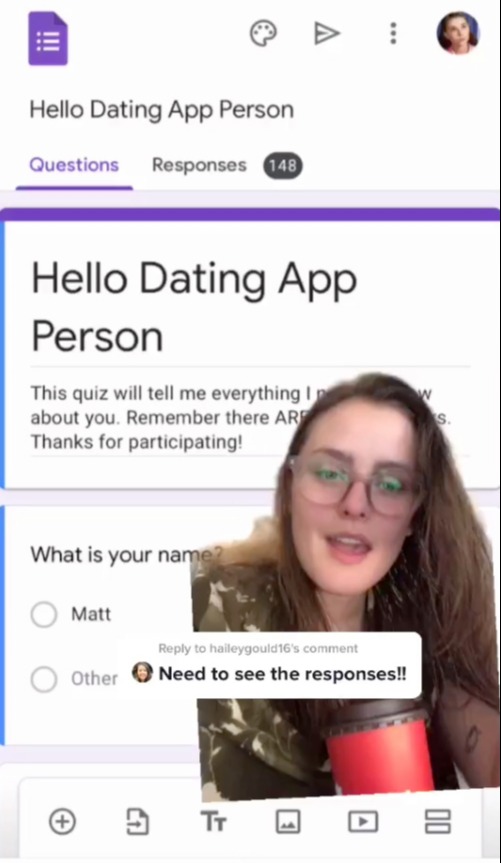 The quiz is made up of 11 questions and covers some of her favourite topics including books, Taylor Swift, the zodiac and Mario Kart.

The singleton named Kennedy shared her unique matchmaking approach on TikTok which has since racked up half a million views.

So far, over 100 people have taken the test – including males and females – but it's unknown who's genuinely interested in a date or just curious about the quiz itself.

In a clip on TikTik Kennedy explains: "I made a Google Form to send to all my dating app matches and it got 100 responses." 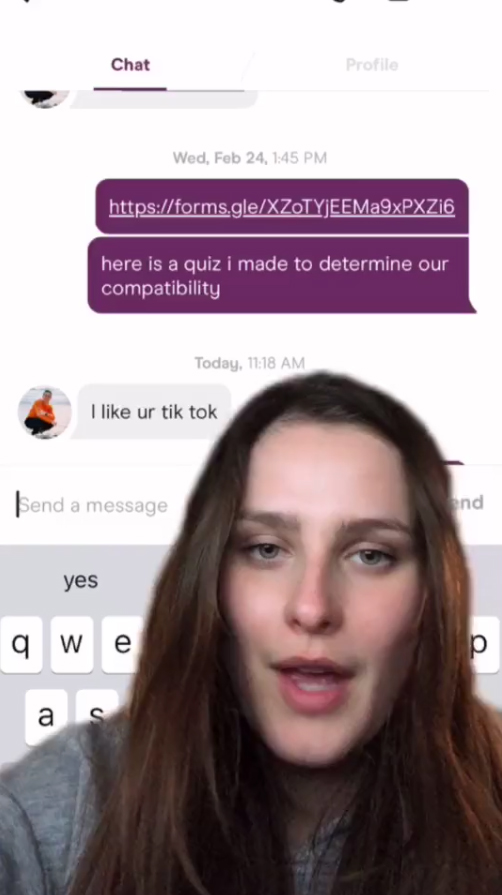 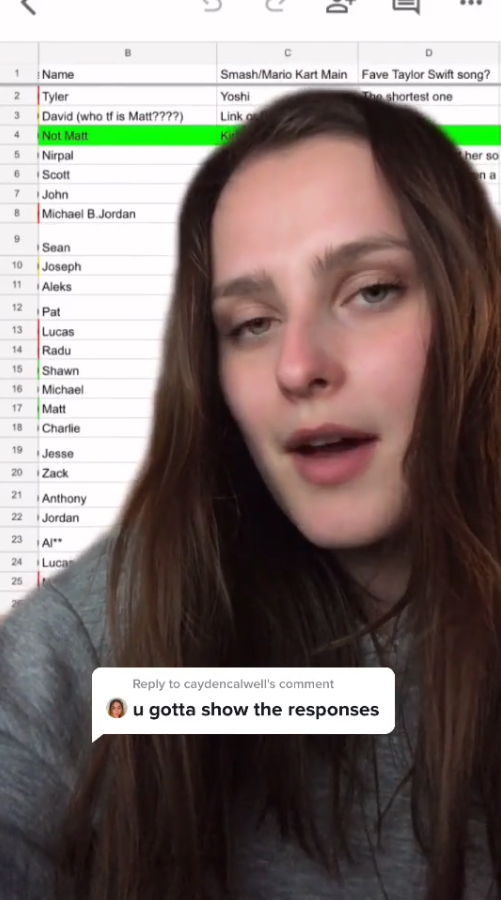 And she's even made a spreadsheet to record the results.

The quiz starts with: "This quiz will tell me everything I need to know about you. Remember, there ARE wrong answers. Thanks for participating!"

Starting off easy, the quiz asks for the participants name, but interestingly, it's a multiple choice question with the options "Matt" and "other" available.

The quiz is full of humour too, with Kennedy writing: "Here's a chance to make me laugh and get a bonus point."

She then goes on to ask: "What is your main in Smash Bros/Mario Kart." 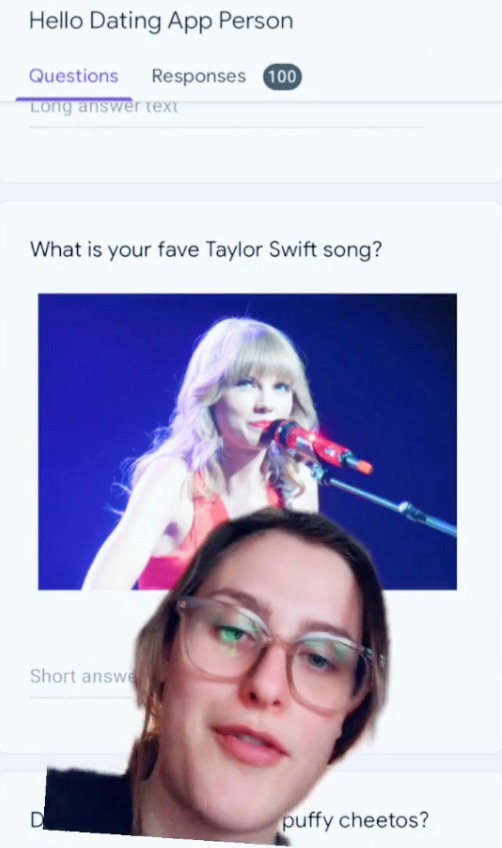 She explains the answer will set the tone for the rest of the quiz because anyone who chooses "DDD" is going to leave her with a "sour taste in my mouth for the rest of your answers."

In a second video she details some of the responses she's received so far, and the answers gave her an insight into their personalities, she explains.

Question number three is: "What is your fave Taylor Swift song?" with the answer being a potential "dealbreaker" for Kennedy who is clearly a mega fan.

She explains: "This question establishes that I am a Swiftie – and also if you say something like 'none' I'm literally not reading any of the rest of your answers and you're out. Deal breaker." 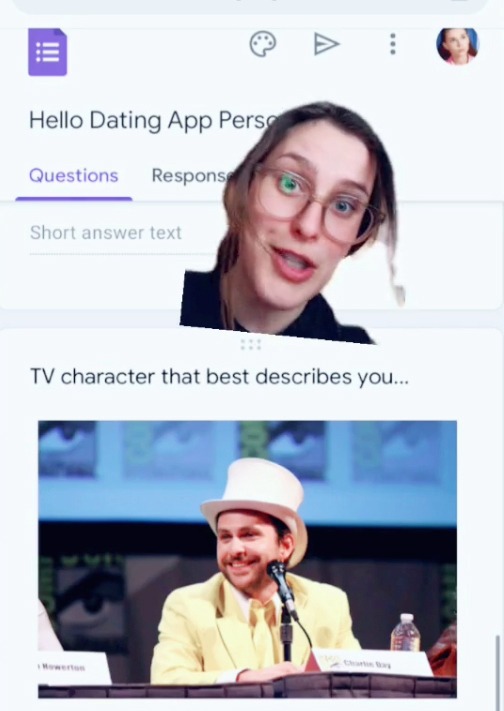 It was bad luck for some who did answer "none" while some took aim at the singer herself – clearly a sign of incompatibility.

Those who took the quiz were also asked to choose between crunchy Cheetos, puffy Cheetos, neither, or other.

Luckily, most of the participants opted for crunchy Cheetos, proving compatible with Kennedy. 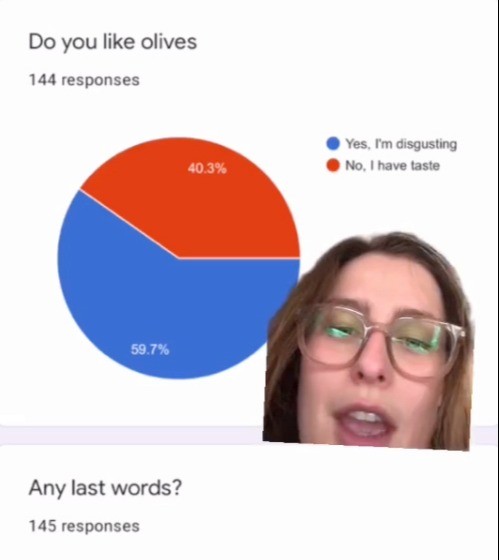 Taking a more serious turn, Kennedy asks respondents to share who they think killed JonBenet Ramsey, a six-year-old beauty queen who was killed in 1996.

"It's fine if you don't know who JonBenet is, that's acceptable, because then I came rant to you about it for 45 minutes a day. But the correct answer is [her brother] Burke, you will look really good if you know the case already," she says .

She says: "If you say Harry Potter, I'm gonna assume you haven't read a book since you were a kid. If you say 'Rich Dad, Poor Dad,' I'm literally blocking you." 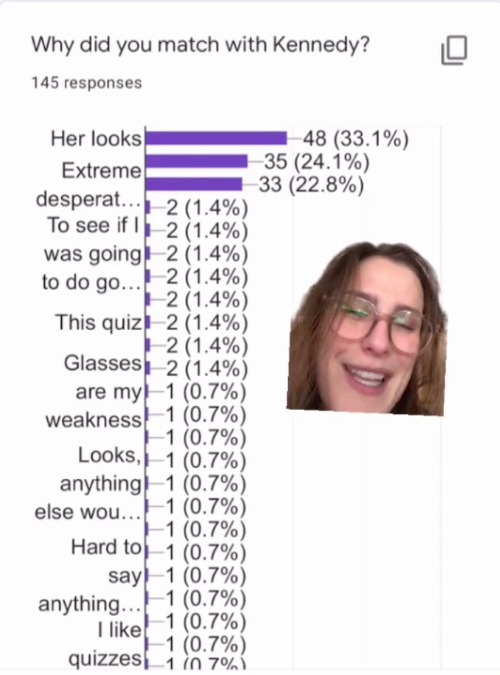 The quiz also challenges people on their reasoning for matching with her to begin with, whether it was "her looks," "her personality," "extreme desperation," or "other."

She jokes: "You better be clicking the first two boxes no matter what"

Other questions ask about zodiac signs, whether they like olives and what TV character best describes them – along with a warning not to choose "Joey from Friends".

Taking her matches seriously, Kennedy compiled a spreadsheet and highlighted those she plans to unmatch.

But her results allowed her to highlight anystand out matches she thinks she could fall in love with.

In other dating news, a woman fumes after date blew her off for his ex but blames his mum’s cooking error.

Meanwhile, this student tells ‘strict’ parents she got pregnant by sitting on her boyfriend’s lap & him sneezing – and it IS possible.

And a man demands date refunds him £25 when she ditches him after third date as it’s ‘only fair’.