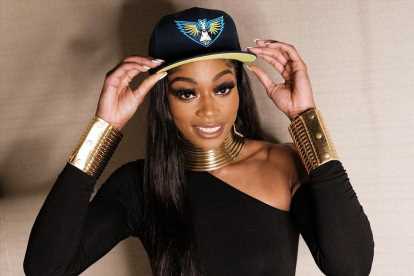 Charli Collier had a double win Thursday night. She was chosen as the number-one WNBA draft pick by the Dallas Wings and she had her first high-fashion moment, courtesy of fashion designer Sergio Hudson.

The 21-year-old, who plays center at the University of Texas, was projected to be the first pick at the virtual draft after a successful season. She received the news at home with her mother, brother and boyfriend while virtually tuning into the draft.

“It still feels unreal,” Collier said during a phone interview about the milestone. “It just hasn’t hit home yet to be number one overall. It’s amazing and it’s a blessing for sure.”

The virtual draft also marked the first time Collier has worked with a major fashion designer. Collier said she and Hudson FaceTimed about the custom look leading up to the draft and that she immediately loved it based on the designer’s sketches.

The L.A.-based Hudson, who made headlines earlier this year when he dressed former First Lady Michelle Obama in a sleek look for the Biden inauguration, took inspiration from modern African royalty and ’90s glamour for the one-shouldered black dress with embellished gold sleeve details and a matching necklace. Collier also paired the look with one of Hudson’s signature gold belts.

All of the Fashion at the 2021 BAFTA Awards

Collier sees this experience of receiving a custom look by Hudson as a big moment for women’s sports and the WNBA. She thinks Hudson’s interest in her and the draft validates the momentum and growing interest in women’s sports — and the fashion opportunity with WNBA players. (The NBA, of course, has been a major driver of men’s fashion trends.)

“Having Sergio do this for the WNBA is definitely a huge moment,” Collier said. “This is what I think will be the first of many in the future for upcoming drafts. There are going to be more designers like him come and do things like this. I’m proud to be a part of this and I really want other draft prospects to have that opportunity as well.”

Hudson also touched on this shift in attention to female athletes, especially in the basketball world.

“There needs to be a shift because these women deserve as much support and fan fair as their male counterparts,” he said. “They train as hard, put in as much work and should be properly rewarded and compensated.”

When It Comes to NBA Fashion, It’s Not About the Clothes