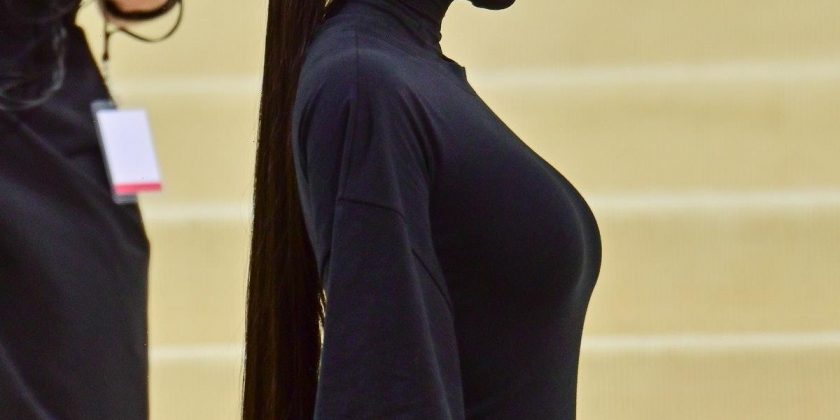 When Kim Kardashian West stepped onto the Met Gala red carpet on Monday night in a faceless, full-body Balenciaga morphsuit, how long did it take you to recognize the social media mogul? Yes, it helped that she wore two similar gimp-like looks in the weeks leading up to the event, but one could argue that even without the precedent, the silhouetted figure was so clearly Kim, even at first glance.

On Monday night, when celebrities entered the Metropolitan Museum of Art for the museum’s annual Met Gala, some embraced the year’s theme, “In America: A Lexicon of Fashion," while others threw it to the side for the pretty European designer dresses they actually wanted to wear (or may have been contractually obligated to). Still, there were cowboy hats, football jerseys, and enough denim to go around. Despite that, Kim’s black T-shirt was the most relevant look of the night.

What is an icon, if not someone who can be recognized without their most obvious feature—their face? Think about Marilyn Monroe, Elvis Presley, Beyoncé, all people with very distinct silhouettes. Putting personal inclinations about whether or not she belongs in that canon, Kim may have just proved that she officially sits among them as an American icon.

But that isn’t the only message presented by Kim’s look last night. In fact, the simple black garment allowed many to project their own interpretations onto her choice of outfit, which in itself feels distinctly American. Head to Twitter or turn on the news at any given moment and you can see people interpreting every move made by celebrities, politicians, and other public figures. It happened just last night with Rep. Alexandria Ocasio-Cortez’s “Tax the Rich” dress. You can find every opinion from “it was an ineffective stunt” to “it was an important message on a well-watched stage” with just a quick scroll through Twitter, but no one seems to care what Ocasio-Cortez—or the dress’ designer, Brother Vellies’ Aurora James—has to say. Similarly, as soon as photos of Kim’s look hit the Internet, everyone had their opinion ready to throw at her, but maybe that was the point she was trying to make.

From the beginning of her career, Kim has represented American culture (some would argue the worst aspects of it). So, last night, as we celebrated America, Kim turned herself into what we already saw her to be—the black hole of modern culture. She represents the age of Instagram, selfies, and influencers invading the fashion space, and now here she is, passively sitting back and allowing us to place all of that onto her.

Maybe you wanted her to show off her body more, though she is often reprimanded for doing so on her Instagram as a mother of five kids. Or maybe you wanted her to unveil her pretty face, though then it becomes hard to take her seriously as an aspiring lawyer. At this point, we expect a lot from Kim, especially when it comes to what she will deliver at an event like the Met Gala, but in the end, Kim gave us exactly what we deserve and she gained even more notoreity in doing so.