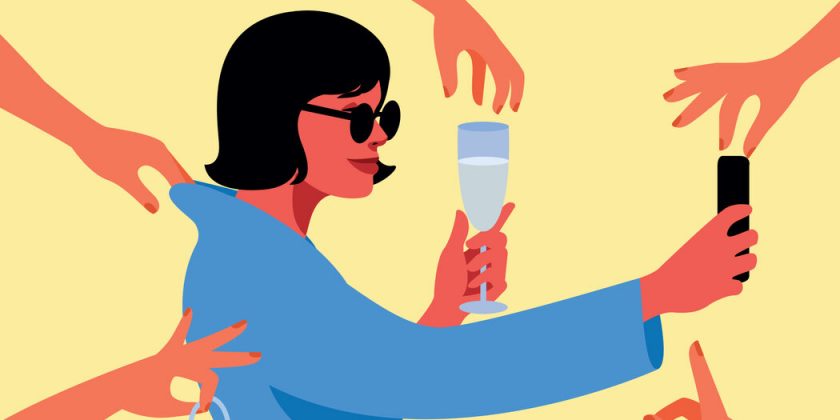 It’s been a year since Tom Hanks and his wife, Rita Wilson, announced they had tested positive for the coronavirus — the first sign, in the celebrity world, anyway, that the pandemic was really happening. Thankfully, the couple recovered. (They even donated their plasma.)

Much of the rest of Hollywood, however, has struggled to adjust to life in a pandemic. Over these last interminable months, celebrities have made just about every public relations error in the books, and added plenty of new entries, including but not limited to: celebrating a 40th birthday on a private island (Kim Kardashian; everyone was tested!), going on Instagram Live and asking if it really matters if people die (Vanessa Hudgens), promising to “do better” and then immediately doing worse (various).

They have flaunted their wealth in the face of profound lack, sung “Imagine” a cappella and thought that would help, and struggled to thoughtfully respond to the social justice movements sweeping the United States.

All the while, a bored and isolated American public has grown increasingly resentful of them, tracking and recording every misstep on screens large and small. As we barrel into Year 2 of the coronavirus, a basic question underscores these blunders: Is it even possible to get good P.R. in a pandemic?

The paradox of celebrity P.R. right now is that while stars are working much less, they have never had a more captive audience. Many Americans have been sitting at home for months now, grasping at any form of entertainment available: Instagram live, Clubhouse conversations, Zoom shows, podcasts. Stars have more platforms for attention and, unfortunately, less to offer.

“I think that as far as celebrity P.R. goes, people don’t really know what’s happening,” said Kelly Cutrone, a longtime fashion publicist who became a celebrity herself after starring on “The Hills” in the mid-aughts. “I feel like nobody knows, really, where they’re headed and what’s happening. Everybody’s like, ‘Well, hopefully in fall. …’”

It’s the refrain that celebrity publicists have been repeating all year: Soon, there will be movie premieres and concert tours and red carpets, and everyone will forget the Armie Hammer rumors and remember why they liked their favorite stars in the first place.

Death of the Talk Show

“Right now, celebrity and the media are a mess,” Ms. Cutrone said. All the usual avenues for good P.R. have been canceled or gone virtual in a way that makes them much less effective.

It used to be that an actor or a pop star could spend a few days in New York and hit the morning and late-night shows, get photographed in multiple designer outfits each day and thus give tabloids and gossip sites several opportunities to write about them and whatever project they were promoting. Now, most live TV appearances are being done remotely, with none of the once-typical fanfare.

This is nice for A-list actors who prefer to promote films without so much hoopla and personal talk. Emma Stone, for example, appeared on “The Tonight Show With Jimmy Fallon” in November without mentioning her pregnancy, still rumored at the time, once; most viewers probably didn’t even notice, as she was filmed only from the chest up.

But for influencers and celebrities who rely on constant exposure to maintain relevance — and that’s pretty much everyone except Oscar winners like Ms. Stone — the virtual talk show is not cutting it.

Lindsay Glickstein, a talent manager and publicist whose clients include “Real Housewives” stars and other reality staples, said the virtual talk show experience makes it more difficult to guide her clients through difficult conversations on-air. Before the pandemic, she would travel to meet them for appearances in New York or Los Angeles. “When you are there, you can stop things,” she said. Now, she has to prep her stars in advance, and “it’s not always easy to remember everything me or someone else tells them.”

Even the hosts are struggling. Two weeks ago, “The Talk” announced it was going on hiatus after one of its hosts, Sharon Osbourne, broke down on camera when discussing her friend Piers Morgan’s criticism of Prince Harry and Meghan Markle. “I feel even like I’m about to be put in the electric chair because I have a friend who many people think is a racist, so that makes me a racist,” Ms. Osbourne said on the show. “How can I be racist about anybody or anything in my life? How can I?”

Shortly afterward, Holly Robinson Peete, a former host of the show, accused Ms. Osbourne of calling her “too ghetto” to host “The Talk.” Yashar Ali, a journalist, followed that up with a report that Ms. Osbourne also made racist comments about Julie Chen and homophobic comments about Sara Gilbert, both of whom are former hosts. Ms. Osbourne denied the claims in an interview with “Entertainment Tonight,” calling herself a “sacrificial lamb.”

So what can celebrities do when they want to promote a project or simply themselves? “Your options are limited,” said Judy Smith, a crisis management expert who has worked with Monica Lewinsky, Angelina Jolie and who served as the inspiration for the Olivia Pope character on “Scandal.”

Red-carpet interviews and big in-person events can be crucial for stars who want to pin some positive P.R.“For example, if you heard rumors that, I don’t know, someone was breaking up, or they had problems in their relationship, three days after that they would turn up at a big event, right?” Ms. Smith said. “They would turn up at a big event and show a sign that ‘we are together and we’re not separating’ or ‘we’re not having problems.’ That option is not available to folks now.”

Earlier this month, The New York Post reported that Jennifer Lopez and Alex Rodriguez had broken off their two-year engagement. At least one of the parties involved seemed to have been surprised by the report, and the couple issued a statement the next day denying the breakup but admitting that they were “working through some things.”

If this had happened in 2019, Ms. Lopez and Mr. Rodriguez could have shown up to an event the next day and cleared up the confusion. Instead, Ms. Lopez posted a TikTok video in which she called the headlines about the couple’s relationship “dumb.”

In lieu of the canceled events, Ms. Glickstein has encouraged her clients to share more relatable aspects of their lives on social media. Before the pandemic, “closet tours” were popular on the Instagram accounts of “Real Housewives” stars but showing off one’s Birkin collection doesn’t land the same way today.

Now, it’s better for influencers to talk about the realities of life with social distancing, according to Ms. Glickstein, who said her clients are trying to keep “content positive and also relatable to what’s going on. If somebody is feeling down one day, they’re sharing with their audience.”

It’s difficult, however, for stars to come up with a constant stream of content, especially when they have fewer projects to promote. Only a few have been able to keep up.

Of course, Ms. Kardashian has made some blunders, too (see: that private island birthday party). More attention brings more opportunities for the public to find fault.

“People are paying more attention now than ever,” Ms. Smith said. “So if you make a mistake, you need to understand that the stakes are higher than ever as well.”

Over the past year, many Americans have become more in tune with inequities in society, thanks to movements like Black Lives Matter. Celebrities need to “know the landscape,” Ms. Smith said, and be more thoughtful about what they are putting out for public consumption.

This may include apologizing for past behavior. Last May, Jimmy Fallon apologized in a tweet, and then again on his show, for wearing blackface to impersonate Chris Rock during a 2000 episode of “Saturday Night Live.”

In June, Lea Michele apologized in a Notes app statement, posted to Instagram, after some of her former “Glee” co-stars accused her of racist and bullying behavior on set. Justin Timberlake apologized to Britney Spears and Janet Jackson last month in one Notes app statement, after “Framing Britney Spears,” a documentary produced by The New York Times, reminded the public how he had treated those women. That didn’t go over well, either.

The most successful celebrities and influencers in this time, it seems, are the ones who are able to curb their Instagram and Twitter usage. With idle fans paying closer attention to social media, it’s easy for stars to “like” or “comment” their way into controversy.

Chrissy Teigen, who launched herself to superstardom on Twitter, announced she was quitting the platform on Wednesday in part because of unending negative reactions from some of her millions of followers.

She advises clients to do nothing, which is difficult for most people, especially celebrities who thrive on (positive and negative) attention. Content-starved tabloids and gossip sites have been relying more and more on celebrities’ social media behavior for stories, which makes it even more tempting for stars to respond to every comment about them.

Earlier this year, for example, the first sign of trouble for Ms. Lopez and Mr. Rodriguez’s relationship came via a report that Mr. Rodriguez was sending messages to a reality star named Madison LeCroy on Instagram.

Ms. LeCroy, a cast member of “Southern Charm,” responded to the rumors by immediately calling The New York Post to more or less confirm that she and Mr. Rodriguez had been in contact. (She denied they had a romantic relationship.) That prompted weeks of speculation in the tabloids and negative press on all sides.

Ms. Glickstein, who does not work with Ms. LeCroy, said this urge to set the record straight can backfire. “The one thing that I always do tell my clients is that there’s someone on the other side,” she said. “With a lot of these scandals and these situations, it’s not just you. You’re not the only person. What if A-Rod came out with something back at her?”

Ms. Smith said that when it comes to social media rumors, the best response is usually no response. “I think that sometimes in the heat of the moment, people are looking at numbers trending, good, bad, indifferent, and, ‘I’ve got to respond,’” she said. But “social media moves so quickly and oftentimes people move on to the next issue.”

So, what is best P.R. move these days? Maybe it’s to do what a lot of us are doing: wait.