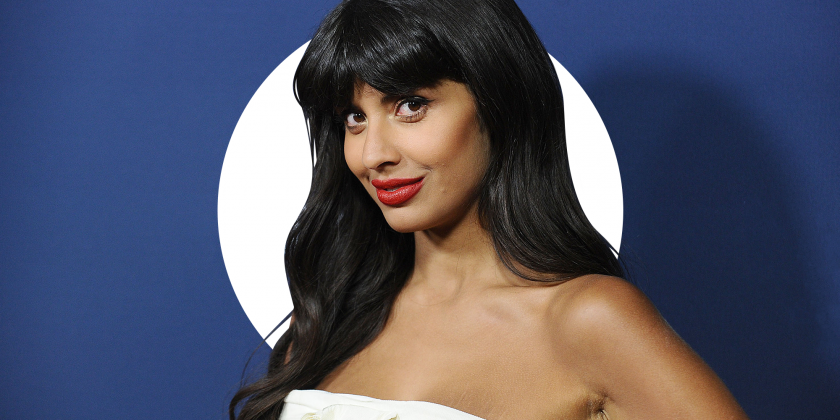 Jameela Jamil believes in a no-filter kind of world.

The British actress/activist, who has been tapped by Aerie to star in its new #AerieReal Role Models campaign, is on a mission to make women confident in their own bodies—whether that’s calling out brands and celebrities for airbrushing images, or accusing A-listers like Cardi B, Iggy Azalea, and the Kardashians for promoting diet “Fit Teas” on Instagram. Jamil knows we’re not yet in The Good Place, but she’s working really hard to make wherever it is we are, better. Most notably with her I Weigh community, a movement she started in 2018 that encourages women to weigh themselves in life experiences rather than kilograms or pounds.

“There is a real rebellion happening, and a real revolution,” Jamil tells BAZAAR.com. “I didn’t realize how tired and done women are with being routinely abused and made to feel not good enough.” 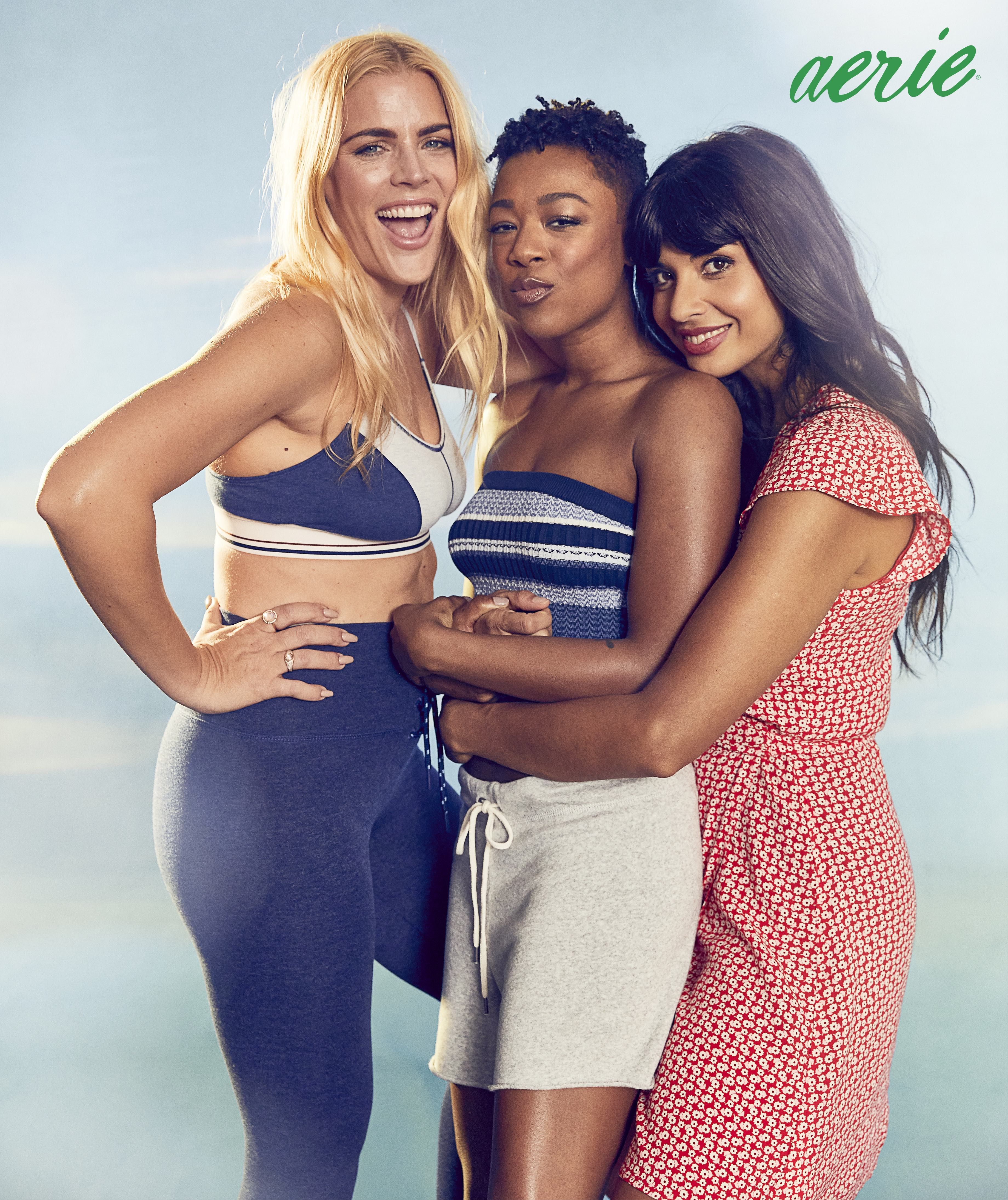 Jamil believes that Aerie, which eliminated Photoshop from all its imagery five years ago, is one of the few brands that strives to reflect everyday life. “And they’re not doing it now that it’s become trendy, or after I started screaming about airbrushing. Back in 2014 they stopped airbrushing their photographs and I think that was a really massive step in the right direction for women, and for young people everywhere.”

A diverse group of inspiring women join Jamil in the Aerie campaign, including model Iskra Lawrence, actresses Busy Philipps and Samira Wiley, poet Cleo Wade, gold medal Paralympian Brenna Huckaby, Olympic gymnast Aly Raisman, and motivational speaker Molly Burke. “There were so many wonderful women on-set that day,” Jamil remembers. “I was very star-struck by Samira Wiley…what an incredible advocate she is for women, and for people, regarding sexuality.” 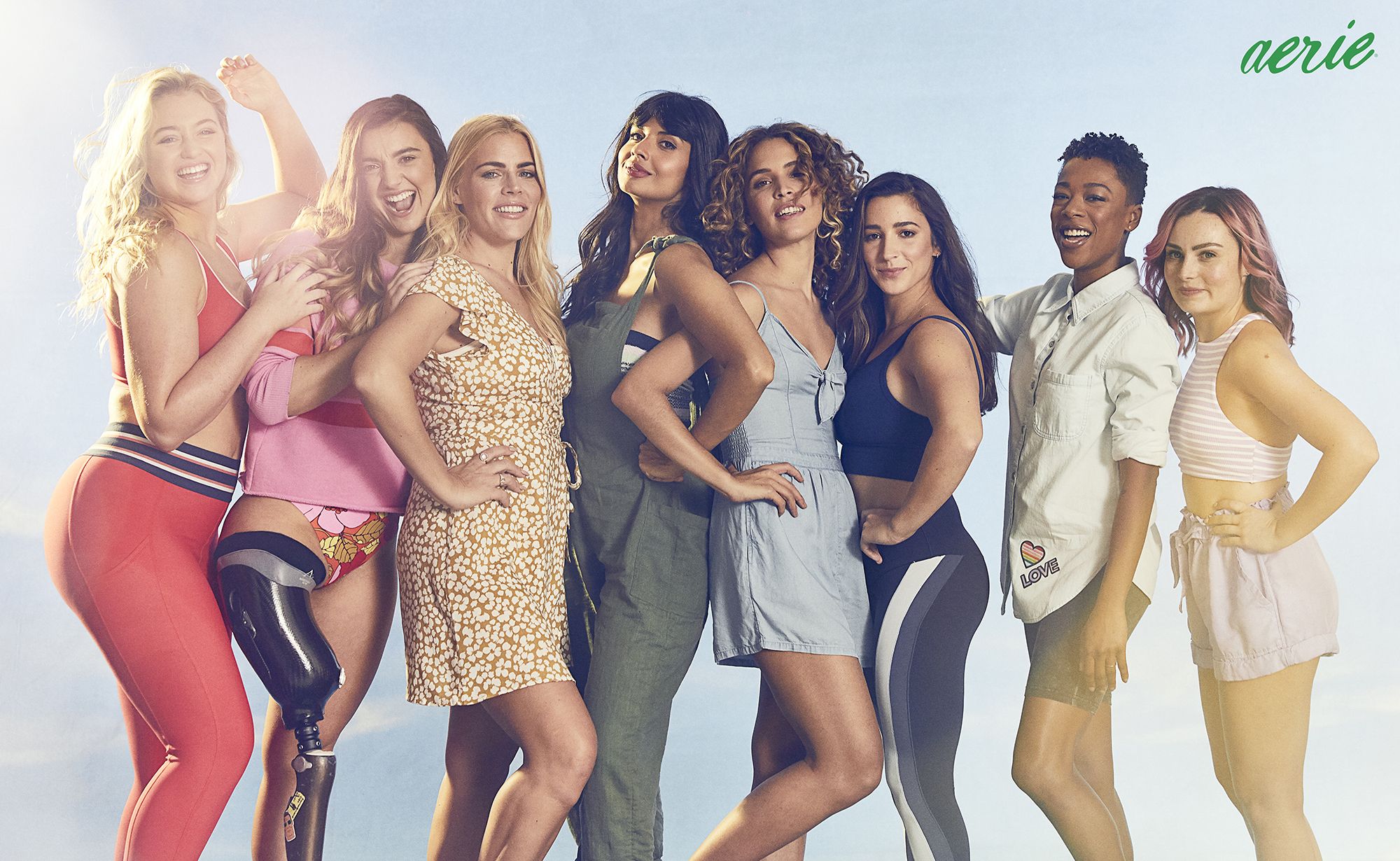 In a phone call with BAZAAR.com, Jamil got real about body image, her I Weigh movement, the dangers of “cancel culture,” and how the fashion industry can be better.

Harper’s BAZAAR:You call out celebrities and brands for their use of Photoshop and promoting unhealthy products like “Fit Teas,” which seems to have sparked some backlash.

Jameela Jamil: I think maybe two female journalists said that I was too slim or too conventionally attractive to speak out about the shaming of women’s appearances. That’s a hilarious device to control this conversation and stop it from happening. If you are not thin, or you’re not conventionally attractive, then you’re “jealous and bitter,” and therefore are not taken seriously in the argument. And if you do have those attributes, then you’re considered too privileged to have the conversation. Therefore, who gets to have the conversation? Nobody. And then we continue abusing women to make them buy things that they don’t necessarily need.

The media wants to portray the idea of a backlash because that makes a good story. There’s a backlash against society, and shaming, and the culture. I’ve had nothing but mass support. Occasionally, I’ll be rightfully critiqued for my approach and then I take a look at myself and I learn, and I grow with the public.

This thanksgiving I want to know… What do you weigh? Send your answers to @i_weigh

HB: What’s your advice to women who want to challenge the status quo, but are afraid to do so?

JJ: Part of that comes down to their fear, and this new culture of woke-bashing, which we need to be a little more careful with. If someone makes a single mistake, or a misstep, or made a mistake 10 years ago, we are never allowed to expect that they have grown and changed and evolved.

Rather than expecting everyone to be born perfectly, we have to make learning something [we’re] excited to do together, because everybody has a blind spot. Everybody has a small amount of ignorance and that’s okay as long as you continue to work on it. I think we could also make a little bit more room for errors, and be willing to give people a chance and a minute to learn, because there’s a lot of information coming at us all of a sudden in the last couple of years after so many years of erasure and tolerance. We need to do this together.

Everybody makes mistakes. It doesn’t make you evil—sometimes you could just be misinformed. Separating ignorance and evil is really important in order for us to encourage more allies. I know men who have made mistakes and therefore feel afraid to put themselves out there now as allies because they’re worried that their mistakes will come back and haunt them from the past. I think all we have to do is publicly apologize for our mistakes and then do better. We can all do better.

“Separating ignorance and evil is really important in order for us to encourage more allies.”

HB: I love your pinned tweet where you admit you haven’t always been the perfect feminist. I think you worded it so perfectly.

JJ: I’m very happy to use my profile as an example of someone who made mistakes in the past and who wants to learn with everyone and be open about it. I’m not ashamed of my mistakes. I wish that I’d never, ever been ignorant, and I’d been all-knowing, like God. I haven’t, but I think it’s really cool that I’m willing to learn, and that people are willing to learn with me. I think people have found a safe space in my social media, where I share my knowledge, I show [myself] working things out.

HB: You admit that, in terms of slut-shaming and intersectionality, you haven’t always been the perfect feminist in the past. How have you personally grown in those areas, and made progress?

JJ: I have just made sure to shut up and listen and accept that I don’t know everything. And listen to people when they are kind enough to talk to us. A great book is by Reni Eddo-Lodge, called Why I’m No Longer Talking to White People About Race. I’ve been listening to podcasts. I’ve been reading Roxanne Gay, who has great literature on feminism. Phoebe Robinson, both of her books are incredible, and her podcast, 2 Dope Queens, is also great. She really gives trans women a platform, and she makes sure to talk about issues within body positivity, or within the culture of being a black woman in the media, and in comedy—just being a woman in comedy. She’s someone that I really, really look up to.

There’s this wonderful woman on Twitter called Your Fat Friend. She’s aggressively kind with her approach to activism and she dedicates her life to educating people, which is definitely not something she has to do. But she’s taken it upon herself. I’ve unfollowed all toxic and empty, patronizing entities on social media, and anything that tells me something that is not important to my life, or anyone trying to sell me things that are not important to my life.

“Things that are very normal to have, like cellulite and stretch marks, I have a plethora of. And I’m no less of a woman, and I’m no less sexy for it.”

I don’t really f*ck with correctional beauty products, because I think they’re quite shaming about things that are very normal to have, like cellulite and stretch marks, which I have a plethora of. And I’m no less of a woman, and I’m no less sexy for it. And I’m no less worthy of being loved because of those things, so I don’t do any of that. I don’t spend my money on that.

HB: What’s the most surprising thing you’ve learned since starting the I Weigh movement?

JJ: That I’m not alone. I’m not the only one who’s tired of the bully outside of my head and the bully inside my head. I didn’t realize how tired and done women are with being routinely abused and made to feel not good enough. Like, if they’re not fitting this straight, white, patriarchal gaze and within that narrative, that they’re just not enough. There is a real rebellion happening, and a real revolution, and it feels like a really exciting time to be part of this. This movement has been going on forever, but I don’t think it’s ever had the kind of mainstream success it’s finally having now. And I think that’s thanks in no small part to social media. As much as it’s been a massive problem, it’s also been a big part of us realizing that we have a shared experience. And we’re all just done.

HB: If there was one thing you’d like to see change in the fashion industry, what would it be?

JJ: Sample f*cking sizes! I’m a size 6 and 5’10”, and I can’t fit into most samples. What is going on? If I have to be shot for press, which I’m contractually required to do for my show, I have to wear these clothes in order to be shot in these magazines. If I can’t fit into the clothes, I can’t be shot in a magazine, therefore I cannot fulfill my contractual obligation. They don’t let you wear your own clothes. They take your size weeks in advance, and they know what size you are, and you turn up and so much of the time, the samples are way too small. I can fit one leg in a pair of pants, nothing goes over my knees. Then you kind of self-shame, like I’ve done something wrong by not fitting into this Gap Kids dress.

It’s not shame on me, it’s shame on them! It took me into my thirties to realize that. Shame on them, because all of us are expected to be small enough to fit into these tiny samples because the designers don’t want to use more material, or the designers just think a hip bone is better for a skirt to hang off of. I don’t know what the motivation is, but for whatever reason these samples are tiny, so everyone has to shrink themselves into this one sample size.

“It’s making everyone feel like there’s something wrong with them.”

Then in the magazines, all you see is the same-sized women. From every ethnicity, every background, every age. Women get into their fifties, when their metabolisms have definitely slowed down, and they’re still maintaining the size of a 15-year-old model. This doesn’t always happen naturally. In fact, most of the time it isn’t natural and they’re having to go to extremes in order to maintain that size. But the women reading the magazines don’t know this, they just think that’s the normal size, and that they are a failure for not being able to fulfill the size that Hollywood and the entire fashion industry seems to seamlessly achieve. Then these models take pictures of themselves eating a thick slice of pizza, or a big bowl of spaghetti, in a luxury hotel in their underwear with zero percent body fat. It’s making everyone feel like there’s something wrong with them.

It all begins with the sample sizes. Make the samples too big—spend the money on a little bit extra material and then at least if someone is too small for them, we can bulldog it, we can clip it. But to start from too small is so unkind to an entire gender who are so hungry. We’re so hungry!

This interview has been edited and condensed for clarity.