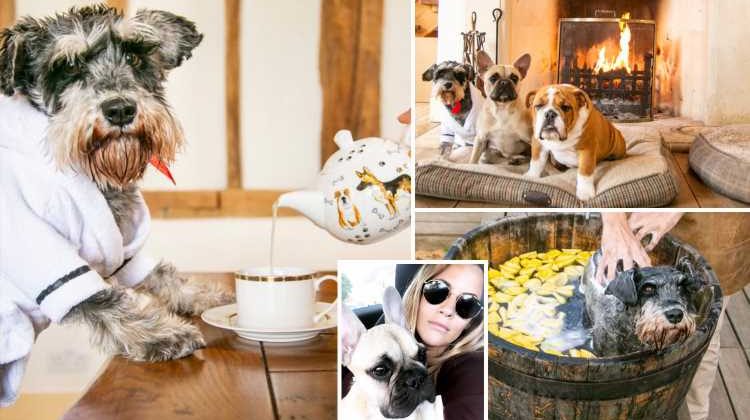 AT 11am sharp, I open the door to a neatly-dressed chauffeur who asks: “Is Mr Ziggy ready to depart?”

Clad in tweed waistcoat, tie and flat cap, the dapper driver opens the door of his silver Range Rover and gestures for my dog to get in. 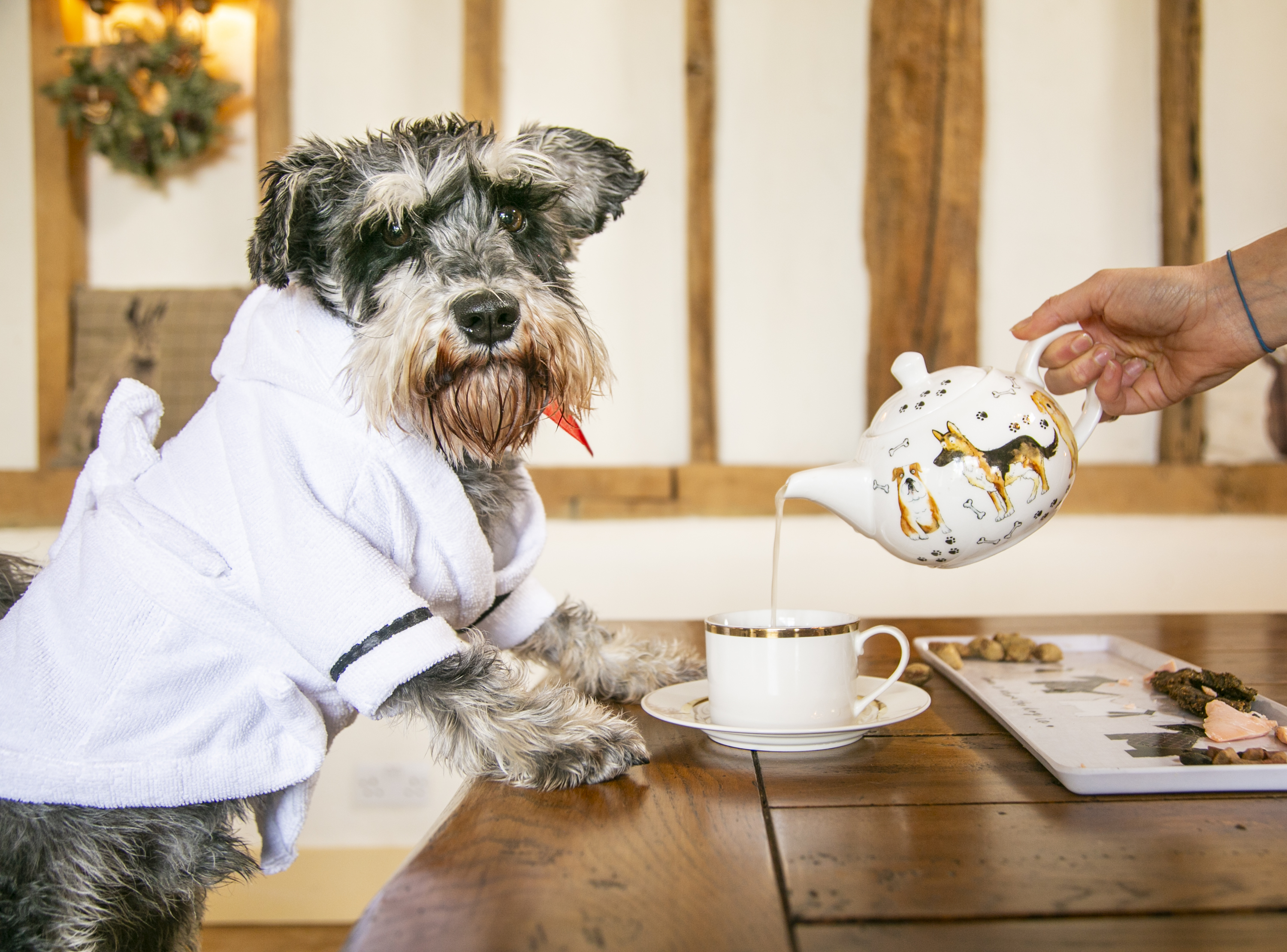 Soon we’re leaving South London for our posh Surrey destination in style, with Pavarotti on the stereo, and Ziggy catching a breeze by sticking his head out of the half-open window.

The ridiculous nature of the situation strikes me when we halt by a London bus stop, Pavarotti blaring out, and the queue of passengers are treated to the bizarre sight of my dog being chauffeured through the capital.

Our driver, Gabriel Stival, declares: “Classical music is very relaxing for dogs,” as he whisks us to The Little Lord Barkley — Britain’s premier dog hotel, where last week The Sun revealed that Caroline Flack’s French bulldog Ruby was one of its most regular customers.

Brazilian Gabriel. 21, has been working at the five-star hotel for three months and says: “Caroline is one of our best customers so I often pick up Ruby from her house.” 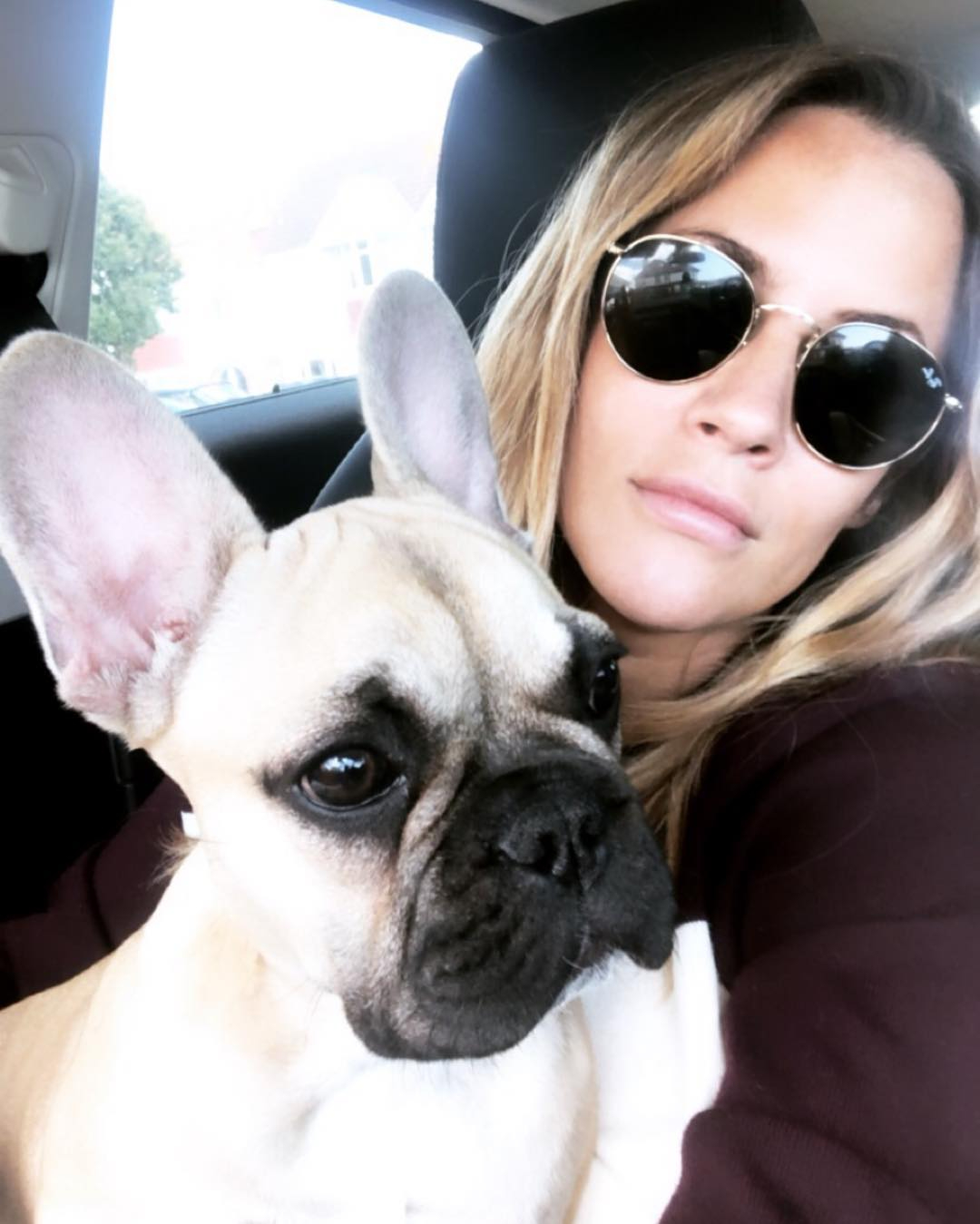 Soon we arrive at the hotel — a sprawling barn conversion in the Surrey hills — and owner Denise Soares greets Ziggy at the front door.

“Welcome, sir!” she exclaims, bending down to give him a cuddle.

The Barkley’s interior looks like a photoshoot from Country Life magazine, with plump red leather sofas, exposed beams and a roaring fireplace. Candles and vases of roses ensure there’s not a whiff of mutt.

And the employees are just as stylish. Their Ralph Lauren, Barbour and Le Chameau uniforms are so country chic that I find myself feeling somewhat underdressed. 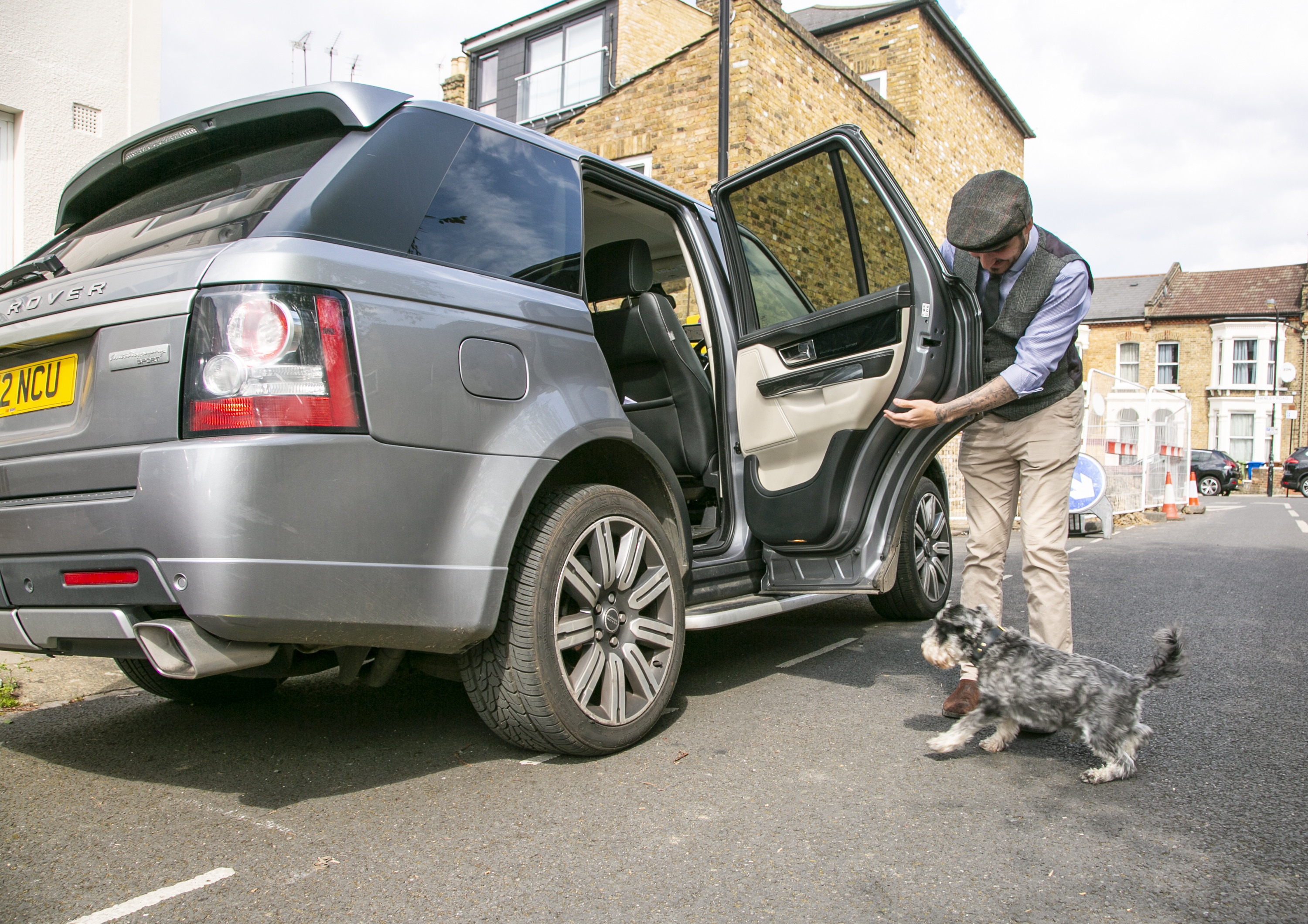 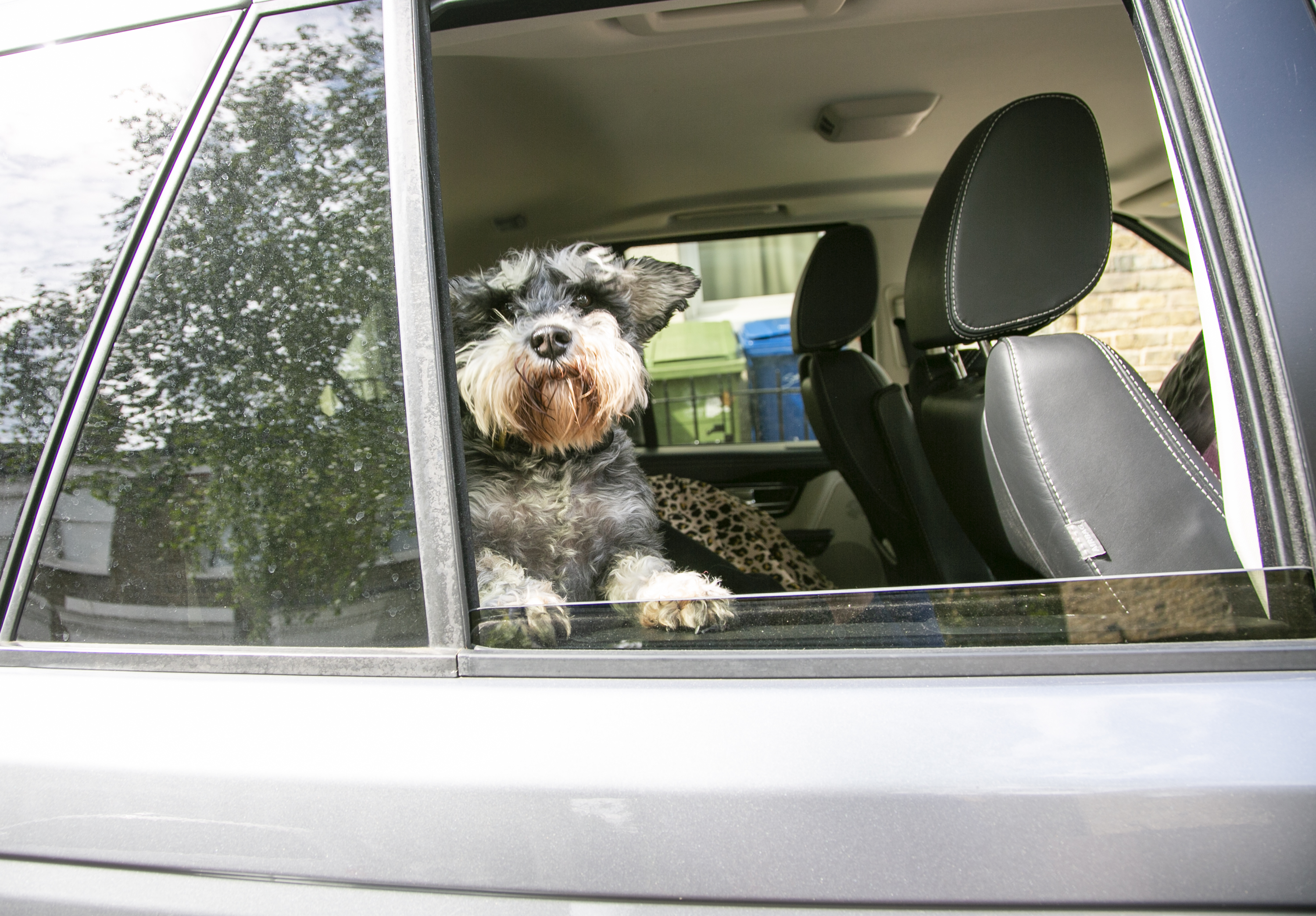 Denise, 40, set up the business two years ago after struggling to find a “reliable, safe and happy environment” for her dachshund Bruce Wayne.

It charges £60 to £75 a night, and its services include a 24-hour “dog nanny” as well as the Range Rover pick-up and drop-off. It has fountains flowing with Evian water, the chef uses Fortnum & Mason ingredients and there’s a trendy Japanese Ofurô bath.

Denise recalls her fruitless search for doggy accommodation before she set up Barkley: “Even the very expensive places still locked the dogs in a kennel or a room at night. I think that’s cruel.

“The dogs here can sleep wherever they want — in the kitchen, in the living room on sofas or by the fire. And there’s someone on hand 24/7. They’re never left alone.” 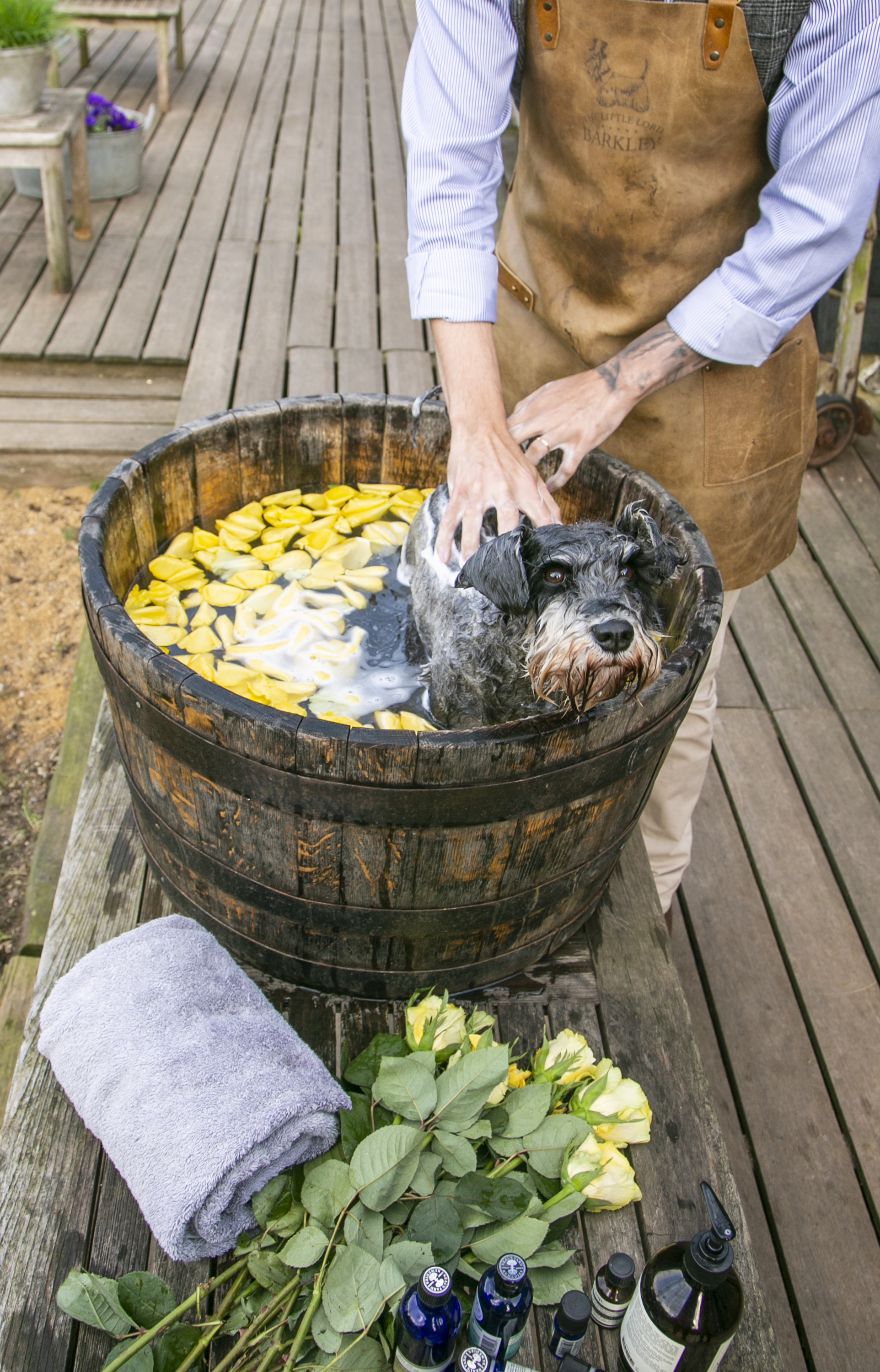 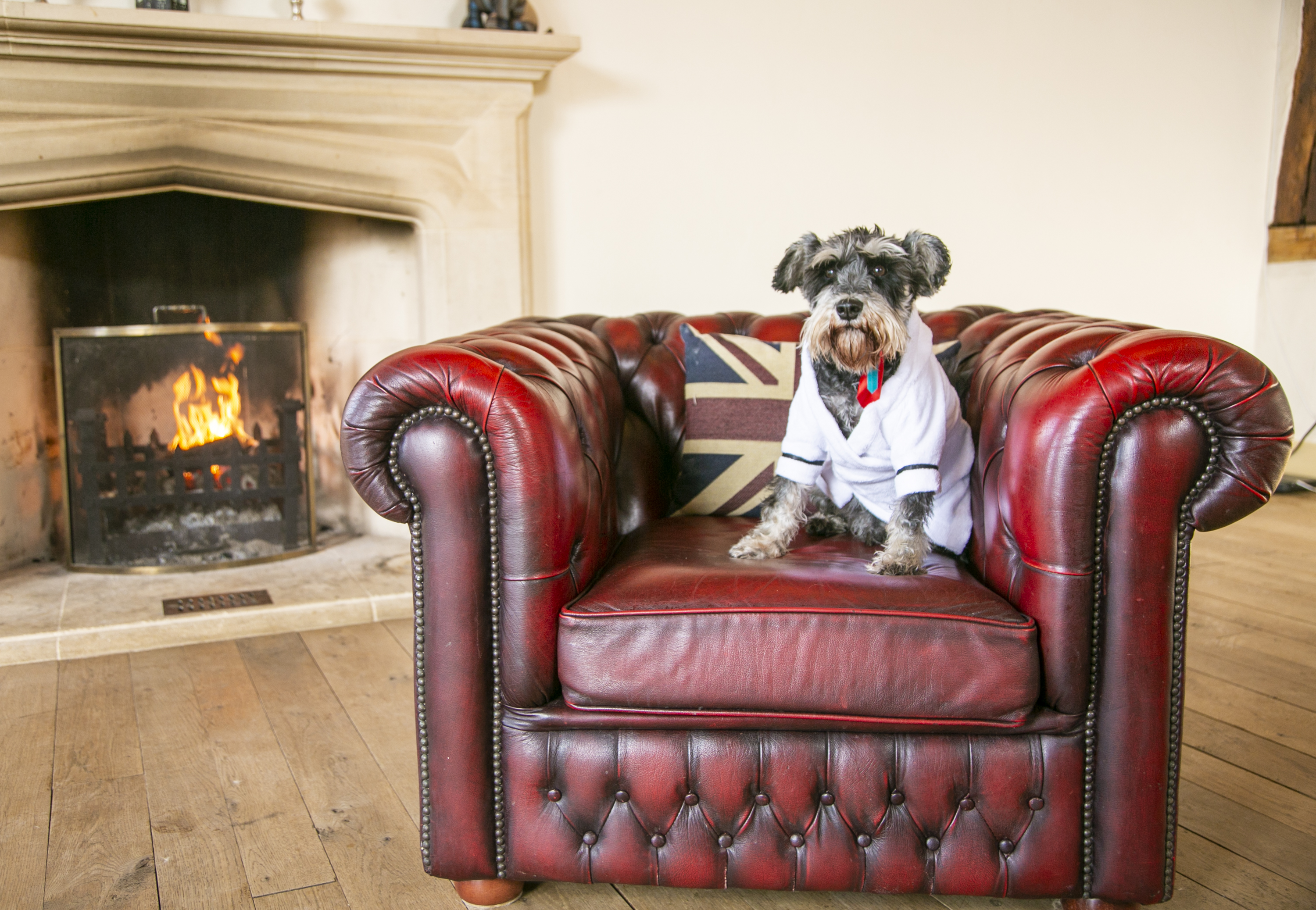 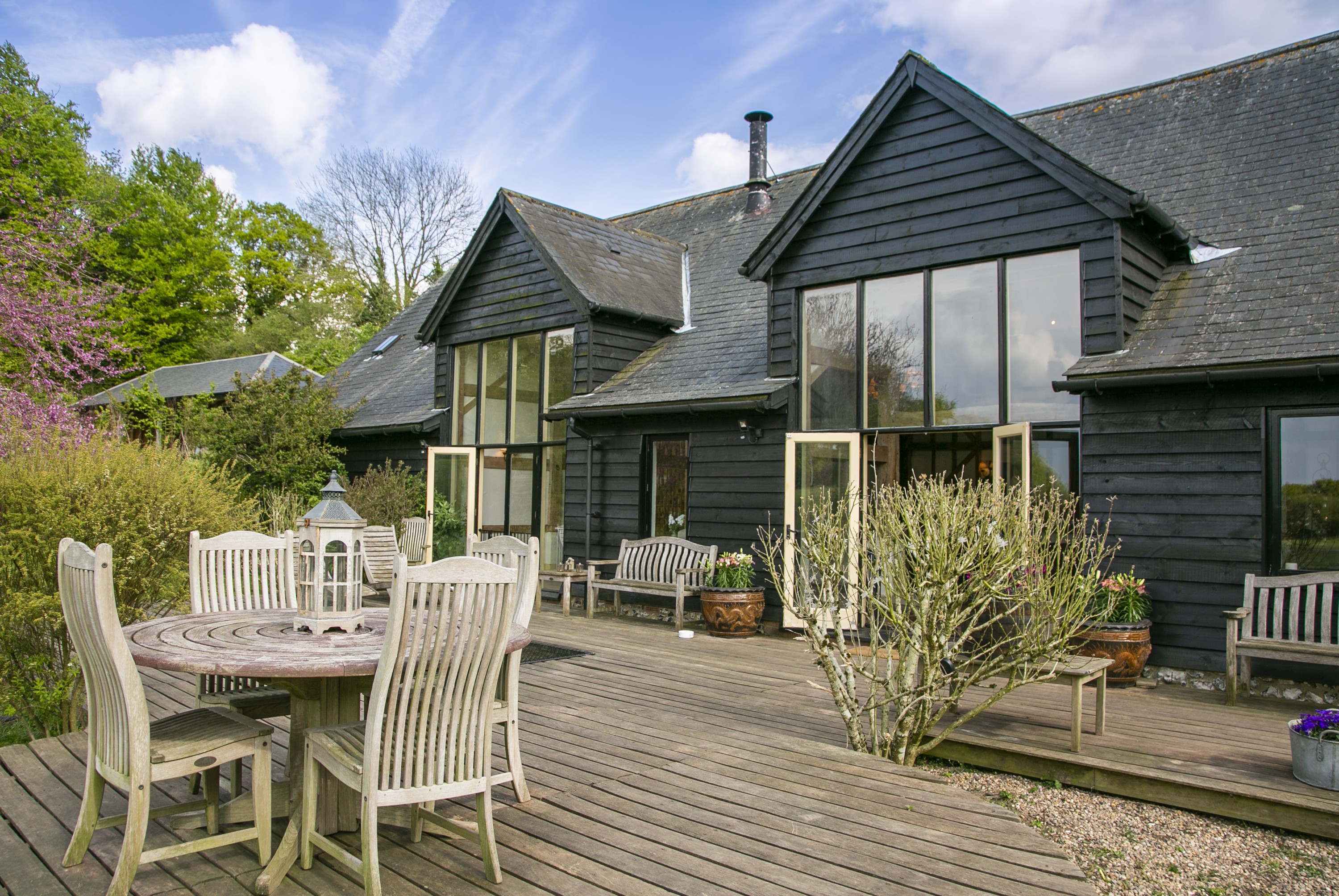 They also get pampered rotten — and now it’s my dog’s turn to feel fabulous. Ziggy, a three-year-old miniature schnauzer, is booked in for a Japanese Ofurô bath and massage, which is designed to clean him “both mentally and physically.”

I stifle giggles as he’s plonked into an outdoor bath and rose petals are massaged into him. I’m not sure he’s enjoying it — but he smells divine.  After a blow dry, Ziggy is presented with a towelling robe and invited to meet the rest of the guests.

There’s Enzo the bulldog, a corgi called Penny and a dainty whippet called Frank. But the leader of the pack is without a doubt Caroline Flack’s dog Ruby, who bounds up to Ziggy and bumps him on the nose.

Denise says: “Ruby is here a lot so she is very much the lady boss of the group. We all adore Ruby. Caroline is away a lot with filming commitments but when we take Ruby she has total peace of mind.” 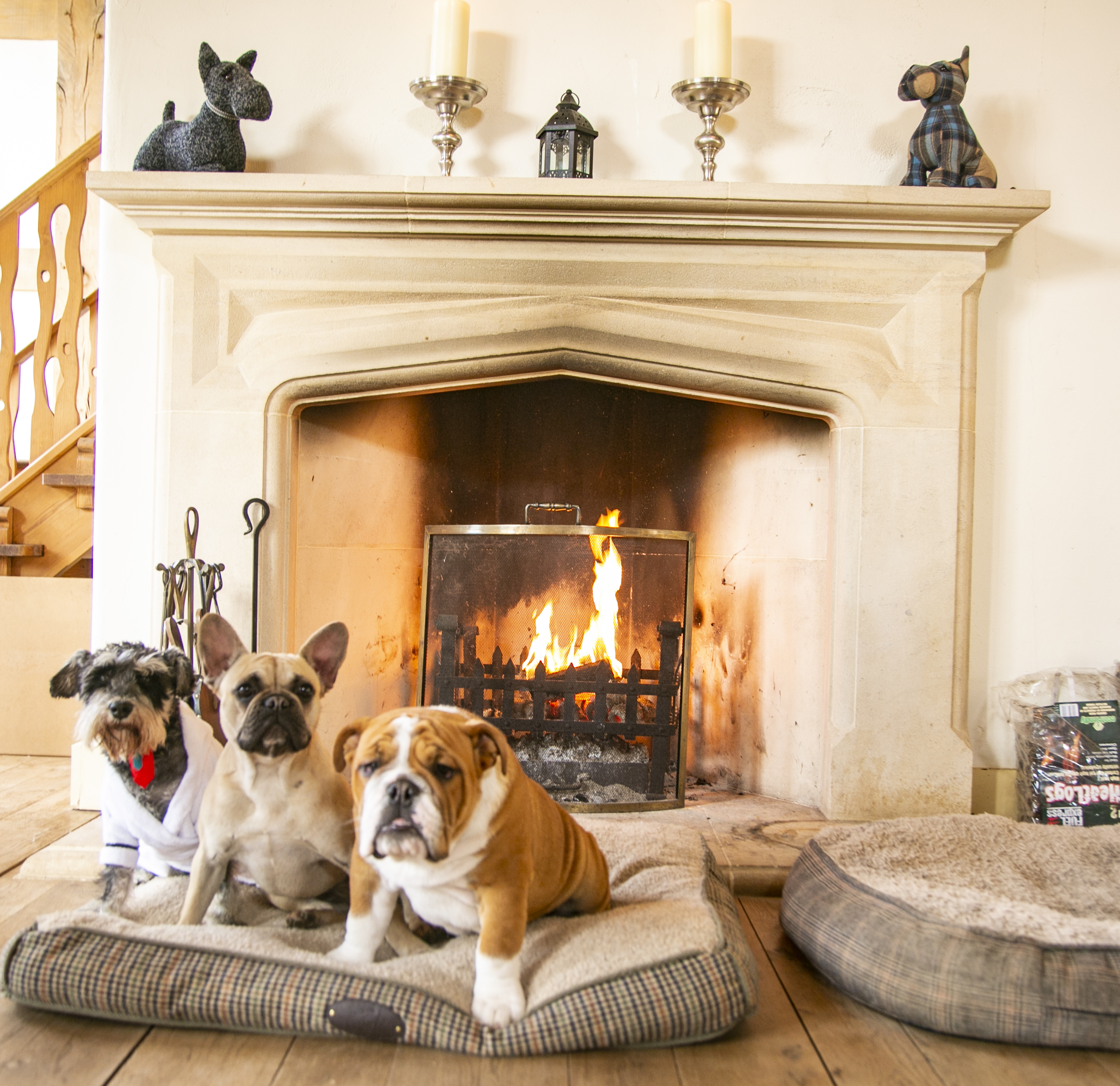 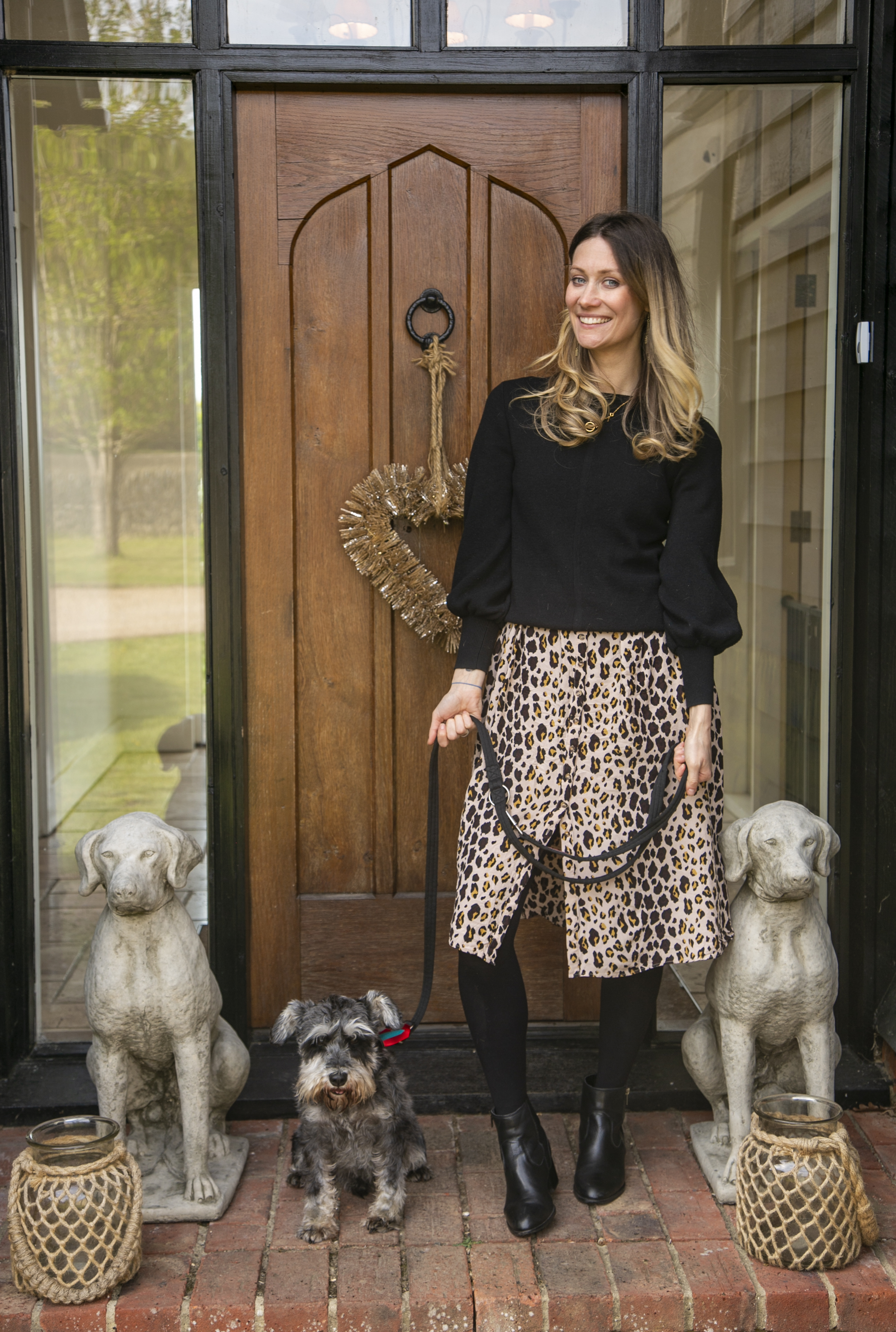 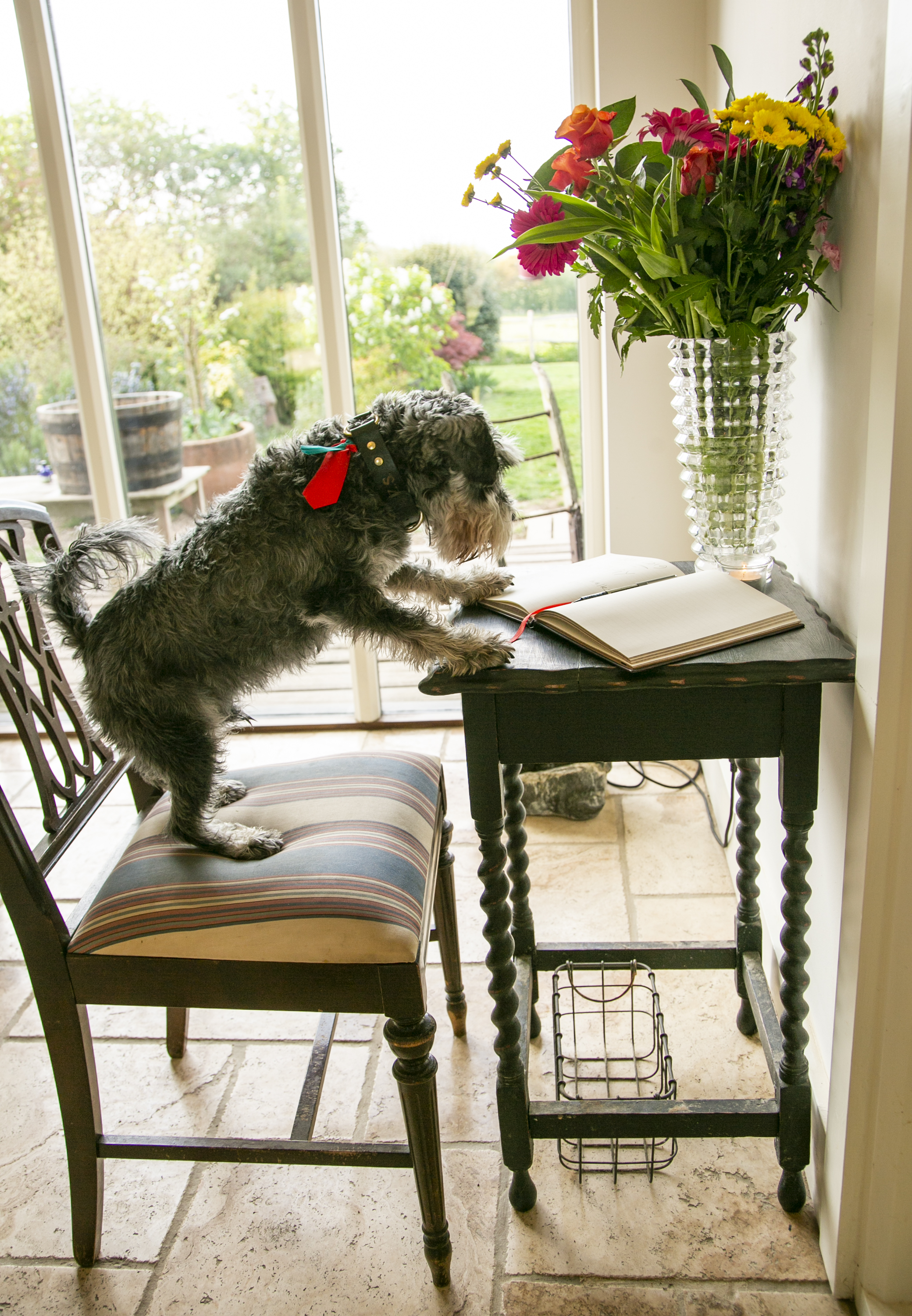 The hotel’s ten guests happily chase each other around the secure garden, with its Evian fountains for the dogs.

“Evian’s pH of 7.2 is the perfect option for optimal canine health,” according to Denise.

In the kitchen, chef Sheyla Martins is preparing tonight’s dinner. On the menu is free-range chicken breast and a delightfully pink salmon from Fortnum & Mason, with rice and organic vegetables.

But first it’s time for Ziggy to enjoy afternoon tea — a platter of Edam cheese, flaky salmon, diced chicken, a “dog burger” and chicken broth in a teacup.  He soon wolfs down the lot, licking his lips in delight.

As this hotel is dogs-only, it’s time for me to check out.  We leave with a goodie bag containing treats, branded dog bowls and a leather dog passport holder from Aspinal.