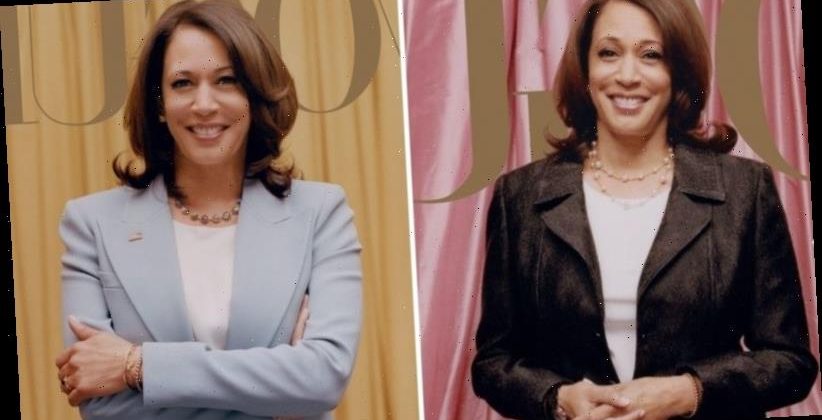 When it came to choosing a cover star for its February cover, US Vogue had two choices: US Vice-President-elect Kamala Harris, or incoming First Lady Jill Biden. Pleasingly, the fashion bible chose the former, who will make history on January 20 when she is sworn in as the first woman, and first Black person, to occupy the role.

But that's where the plaudits for the magazine, led by Anna Wintour, seem to dry up.

Reports emerged on Monday, Australian time, that while Harris posed for photographer Tyler Mitchell, who has shot Beyonce for the magazine, in two looks – one formal, one more relaxed – the magazine made a last-minute switch without consulting the incoming VP's team.

According to reports, Harris' team believed the shot of her wearing a powder blue Michael Kors suit and US flag pin on her lapel was the intended cover, not the one of her in jeans and Converse sneakers against a pink-and-green backdrop meant to signify her Howard university sorority, Alpha Kappa Alpha. As per Vogue's Instagram, it appears the agreed cover shot was used for the digital edition only, not the printed edition.

Neither Harris' team nor Vogue have commented officially on the alleged switch but that didn't stop several high-profile identities from issuing a public rebuke against the magazine's decision.

Actress and singer Bette Midler, who has been vocal in her opposition of President Donald Trump, said Vogue's decision to show Harris in a more casual pose on the cover had "let the team down".

On Twitter, Midler said the blue suit shot, which Vogue also shared on its social media accounts and its website with the cover story, "is perfect, and professional, and the draperies in the background are not askew, the way they are in the published cover. What gives?"

One Australian glossy magazine editor, who spoke to The Sydney Morning Herald and The Age on condition of anonymity, said in her experience, cover approval was rarely given to the talent, although in the case of a "big deal" such as Harris, it may have been included in the terms of the shoot.

Fans took aim at Wintour's alleged selection of the "softer" image with a "less confident smile/pose" over the blue image, which one Twitter user described as "clean, warm, powerful and distinguished".

Of course, the Converse sneakers, or at least a pair like them, complete with Black Lives Matter pins, were part of Harris' campaign wardrobe, and she was often spotted wearing them at events. She previously told Vogue she has several pairs in her collection. But whether the sneakers belong on the cover of Vogue is what has fashion commentators' riled. 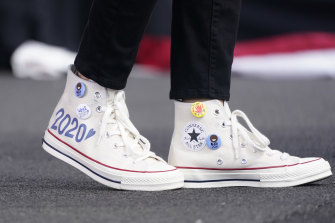 A pair of Kamala Harris’ Converse … but do they belong on Vogue?Credit:AP

On its website, Vogue ran the two images side by side alongside the story, by Alexis Okeowo, in which Harris discussed the priorities of her first 100 days in office under President-elect Joe Biden, as well as the influence of key women in her life including her mother, who died 12 years ago.

However, the story, in which Michelle Obama speaks to the magazine about Harris, has been, at least for now, totally overshadowed by the debate over the cover.

For his part, Mitchell has only shared the powder blue suit image on his social media accounts. It is not known whether he was consulted about the image selection for the cover. At the time of writing, Harris had not shared either covers to social media.

According to Vogue's website, the magazine went to press in mid-December.

The controversy comes less than six months after The New York Times suggested Wintour's “diversity push” at Vogue, particularly the September 2020 issue celebrating Black talent and creativity, had come far too late. Still, despite speculation at the time that she may be pressured to step back from her role, in December, parent company Conde Nast promoted her to the post of worldwide chief content officer and global editorial director of Vogue, effectively putting her in charge of the masthead worldwide, including Australia.

Get a little more outta life

Start your week with practical tips and expert advice to help you make the most of your personal health, relationships, fitness and nutrition. Sign up to our Live Well newsletter sent every Monday.