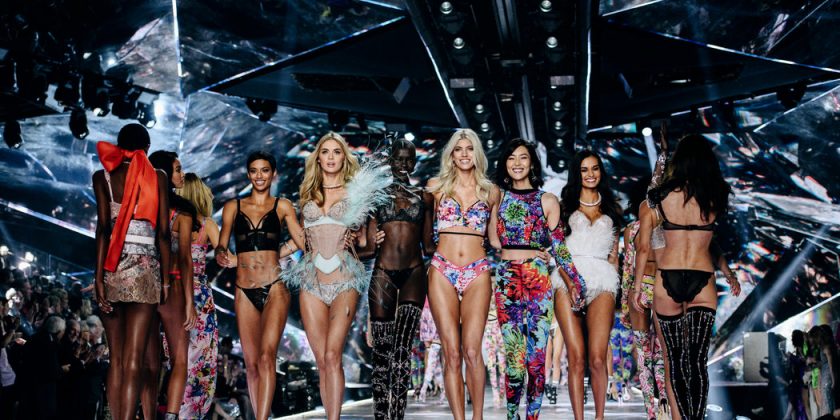 Victoria’s Secret is not going down without a fight.

It knows what people have been saying: The lingerie brand is anachronistic; out of touch; mired in an old and objectifying idea of female beauty that is white, worked-out, boob-centric and essentially about naughty maid role play in the bedroom. It knows there have been analysts notes claiming the label is on a long spiral to nowhere.

It knows that Aerie, with its love-your-body-as-it-is message, is nipping at the label’s (high) heels. It knows Rihanna, with her all-inclusive Savage x Fenty lingerie line at New York Fashion Week, is gunning for it.

It knows that having a show with women dressed up as come-hither Scottish lassies on loan from Rob Roy’s fantasies in teeny tiny panties, over-the-knee argyle socks, push-up plaid bras and pleated tartan miniskirts during the same week that more than 100 female politicians from around the world gathered in the House of Commons in Britain to commemorate women’s suffrage, and the same week that an unprecedented number of women of all races and ages and sizes was elected to Congress was perhaps not the best timing. 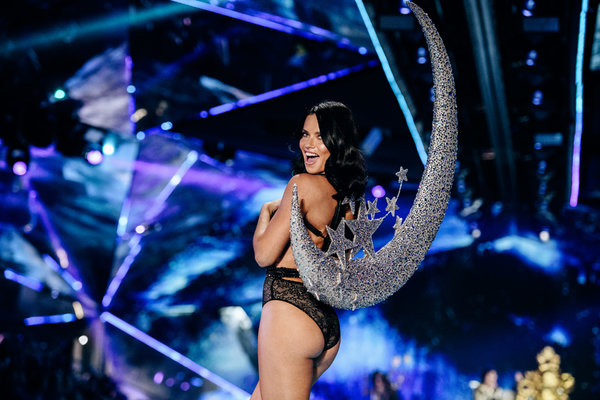 So it began that show, which took place Thursday night on Pier 94 on the Far West Side of New York, with a video featuring some of its most famous models talking about how doing the show made them feel “successful,” “powerful,” “empowered,” “strong.” About how “we can be sexy for ourselves and who we want to be, not who a man wants us to be.” It even set the opening lineup to the song “This is Me” from “The Greatest Showman,” performed by the soul singer Leela James.

And then came the undies.

And the wings. And the diamanté body suits. The feathers. There was a floral section guest-designed by Mary Katrantzou, a London Fashion Week regular. (And a woman! See! Women like VS!) That section featured some wrap-waist cargo pants that looked suspiciously like … clothes. But that didn’t last long.

The models mugged for the camera (the show will be broadcast by ABC on Dec. 2); blew kisses, waggled their booty, drew hearts in the air, and waved their hands around in an attempt to get the audience to cheer. Adam Levine, in the front row with some friends to support his wife, Behati Prinsloo, obliged by standing up and shouting every time she came down the runway.

During a lull between sets — there were seven “themes,” including Golden Angle and Celestial Angel and Downtown Angel — a voice-over reminded the crowd that VS was the only show that gave tickets to the models so they could invite their families. (See! Community!)

It also rolled out some stats: 1.6 billion people viewed the show last year, of which 70 percent were women. It had 220 billion press and social media impressions.

The point being, of course: Argue with that, haters.

The problem being: You can. (While the social media numbers may be booming, the in-store sales are not (a discrepancy that should be noted by all brands that equate fans and likes with revenues).

VS may well still be — as Edward Razek, the chief marketing officer of L Brands (VS’s parent company) and the man behind the spectacle, insisted in an interview with Vogue before the show — “the 800-pound gorilla in the space,” with a bra that “will sell more as a single item than a small competitor that’s been trying to make a lot of noise lately [sells from its complete range].” (Ahem.)

It may be doing its best to try to move with the times, adding more sports bras and dropping some of the excruciating cultural stereotypes that got it in trouble in the past, avoiding the pitfalls of Native American headdresses this time in favor of safer moons and stars. Its models have become more diverse in terms of skin tone, if not in gender definition or size. (There were a few curvier women on the catwalk but none that could qualify as plus size by any objective definition.)

But its essential vocabulary — its approach to the world — is still dedicated to an idea of sexy rooted in the pinup era, when women and their bodies were defined by the eye and imagination of a male beholder; when they were at the mercy of the moguls. When their flesh was strapped in and sucked in and their cleavage was pushed up and their bottoms were cantilevered out by the physics of spike heels, and everything was waxed and moisturized to airbrushed extremes, and it was all covered by a scrim of lacy peekaboo. And that era is on its way to extinction.

To pretend this is not so is to ignore everything we have learned over the last year about men and women and perception and the danger of received conventions. To think that presenting women as presents to be unwrapped does not shape social expectations is to fool yourself. If Victoria’s Secret wants to remain relevant to the cultural conversation, it has to accept some responsibility for re-forming (and reforming) that conversation. Right now it simply doth protest too much. Climate change is not just about the environment.

The models may see this as a harmless game of role play (though the number of gym hours they famously log to get the gig, and the tears that the brand captured on video when they found out they did, would suggest that the effort goes far beyond a game). But show me the viewer who sees Gigi Hadid strutting down a runway in floral boot leggings and floral push-up bra toting a giant floral — what? parachute? because why?— and thinks: “Empowerment!”

Show me the viewer who sees Shanina Shaik in shell pink lace bra and panties with a silver brocade corset and silver ankle cuffs with her neck tied up in a big bow and thinks: “Damn, that woman is dressing to please herself.”

Vanessa Friedman is The Times’s fashion director and chief fashion critic. She was previously the fashion editor of the Financial Times. @VVFriedman