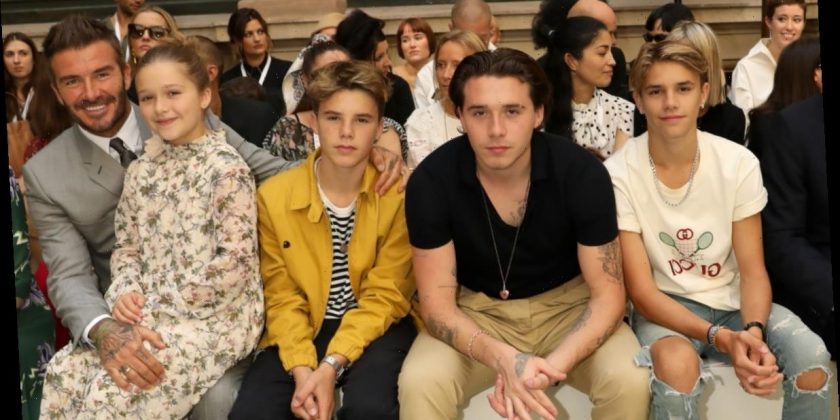 MORE: Harper Beckham is too adorable in this mini-me version of mum Victoria’s dress

The fashion designer showed off her new pieces virtually as part of London Fashion Week, and although her husband David and their four children couldn’t sit on the FROW as normal, they still ensured they were there to cheer her on.

Instead of her planned catwalk show, which she said “didn’t feel appropriate” following the COVID-19 outbreak, VB unveiled her new collection to groups of three visitors at a time – allowing those not in attendance to catch a glimpse via a pre-recorded video online.

WATCH: Victoria Beckham shares glimpse inside bedroom ahead of LFW

While David, Brooklyn, Romeo, Cruz and Harper couldn’t carry out their usual tradition, they still made a trip to Hoxton art gallery to watch the filming of the collection. David shared a snap of Victoria perching on the edge of one of the seats in the gallery as she took photos of the models.

David joined wife Victoria for the filming of her new collection

“Well done ladies. So proud of @victoriabeckham & @ilariaicardi working hard to make this season special,” the former England footballer captioned the photo. VB also told The Guardian: “This season is different in lots of ways, but the Beckhams still got their fashion day out.”

Dressing to impress, Victoria looked chic in a crisp white shirt and a pair of dark grey trousers, complete with pink stitching spelling out her initials VB on the back. Her daughter Harper, however, went for a very bright look in a purple patterned dress and a matching face mask – we’re sure the nine-year-old stole the show at the presentation!

Harper Seven ready for Mummy’s digital presentation in her #VBPAW20 dress and matching mask, made specially for her by the atelier team 💕 x vb

“Harper Seven ready for Mummy’s digital presentation in her #VBPAW20 dress and matching mask, made specially for her by the atelier team. X vb,” the doting mum said.

Meanwhile, all of Victoria’s four children, plus Brooklyn’s fiance Nicola Peltz, also sent huge bouquets of flowers to the designer on the morning of her digital runway show, accompanied by individual heartfelt messages. We’re sure the Beckhams will be back on the FROW as soon as possible…

RELATED: Victoria Beckham shares behind-the-scenes look at LFW – and we need her outfit