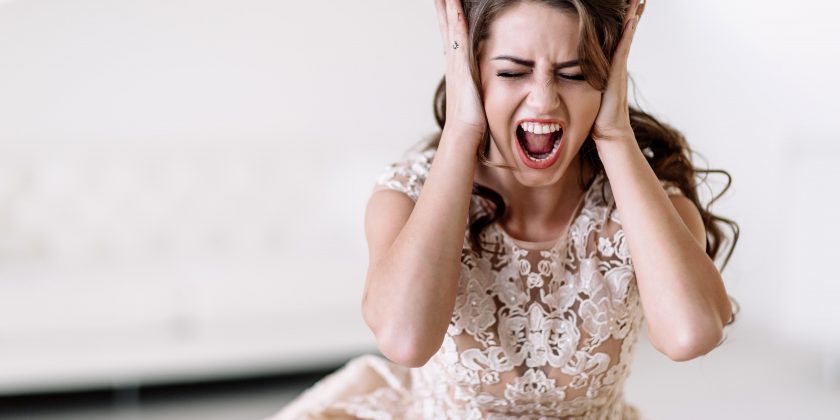 But one vegan bride has ruffled a few feathers after revealing she's banning her meat-eating family and friends from joining in the celebrations. 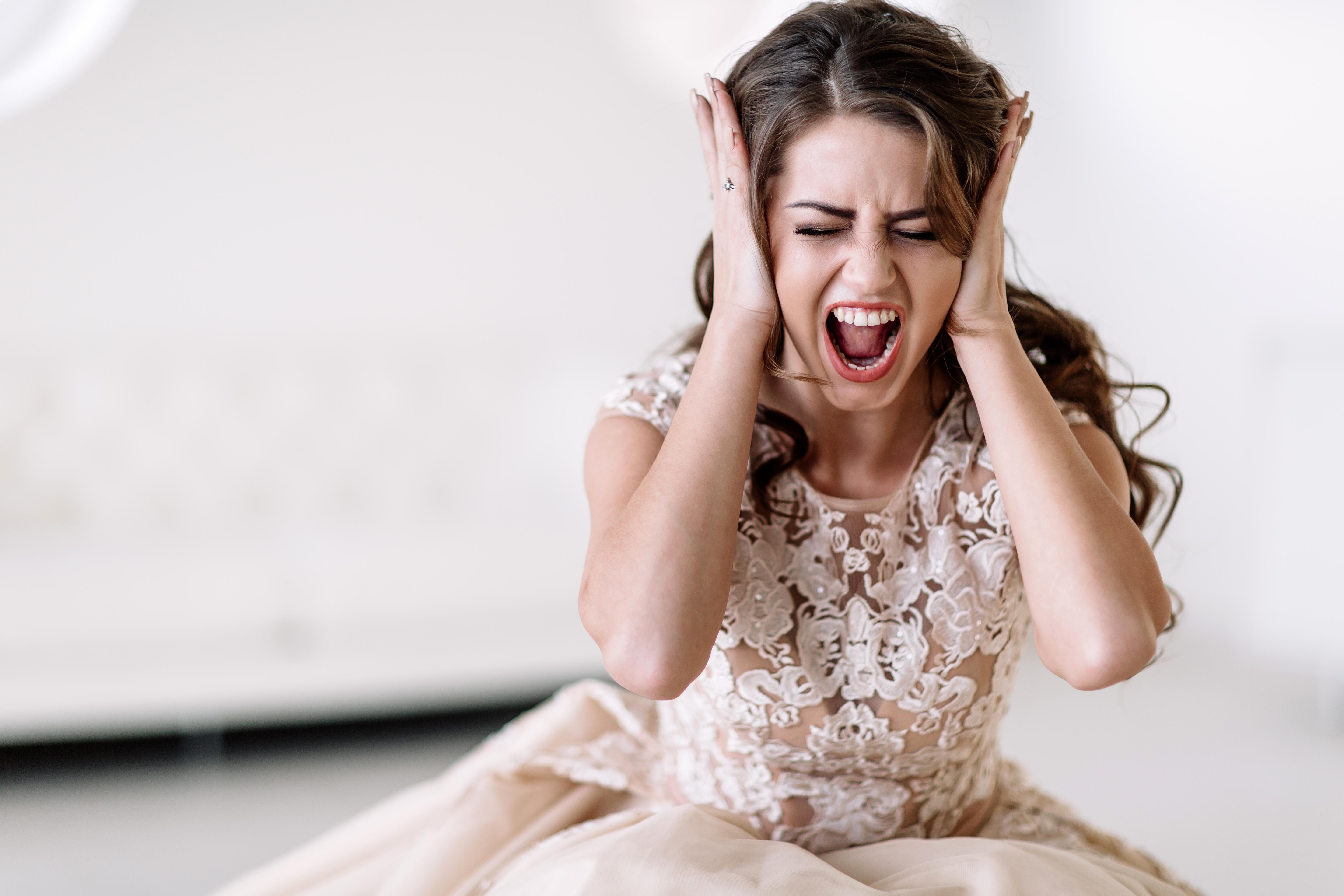 According to News.com.au, the Australian bride explained her plans on a vegan Facebook group, but was shocked when fellow vegans didn't support her decision.

“When your ‘family’ tries to guilt trip you into letting them come to your fully vegan wedding, even though they’re omnivores,” she wrote on the group.

“Just for some context, some family members were told they are not invited to my wedding because we don’t want to host murderers.

“Our wedding is supposed to be one of the happiest days of our lives.” 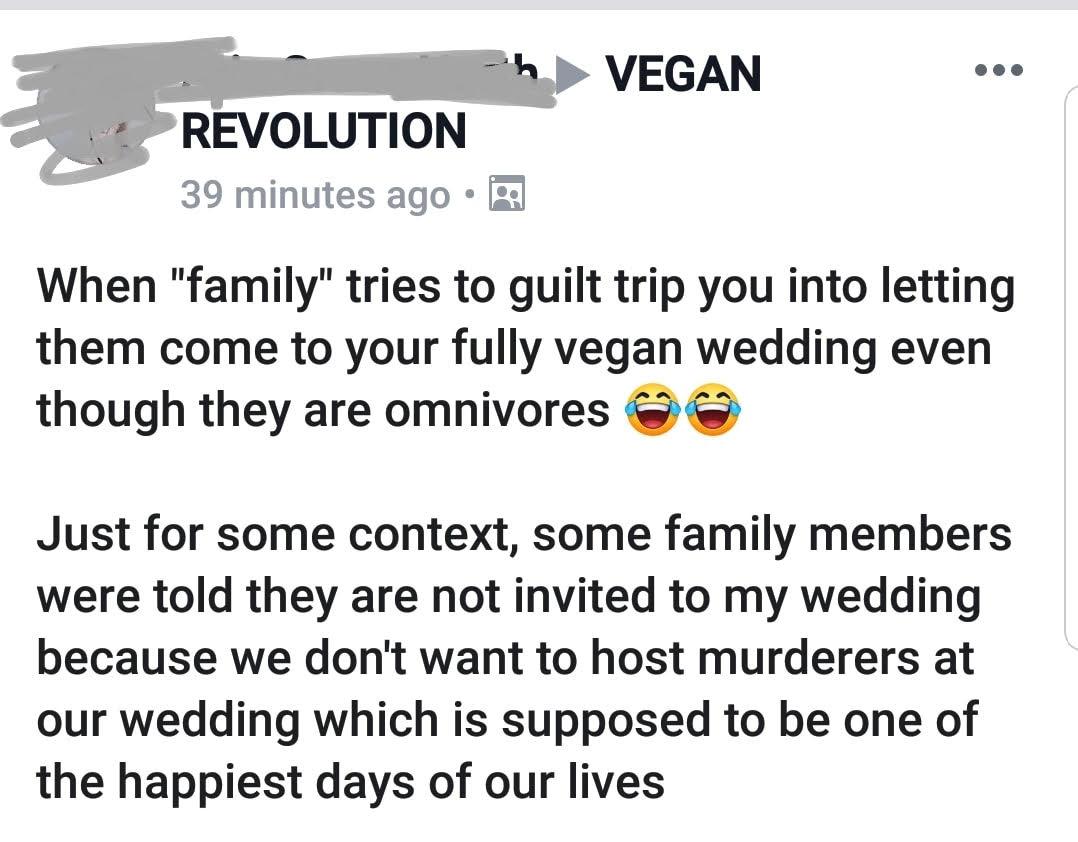 However, other users slammed her for the decision, with one suggesting the wedding would be the perfect time to prove a plant-based diet can be just as tasty as one focused on meat.

“As a vegan, wouldn’t this be a prime opportunity to prove that vegan food can be just as delicious as omnivore food anyway?” They wrote.

While another commented: “This would have been a great way for her to show off her vegan lifestyle and prove the food is delicious.” 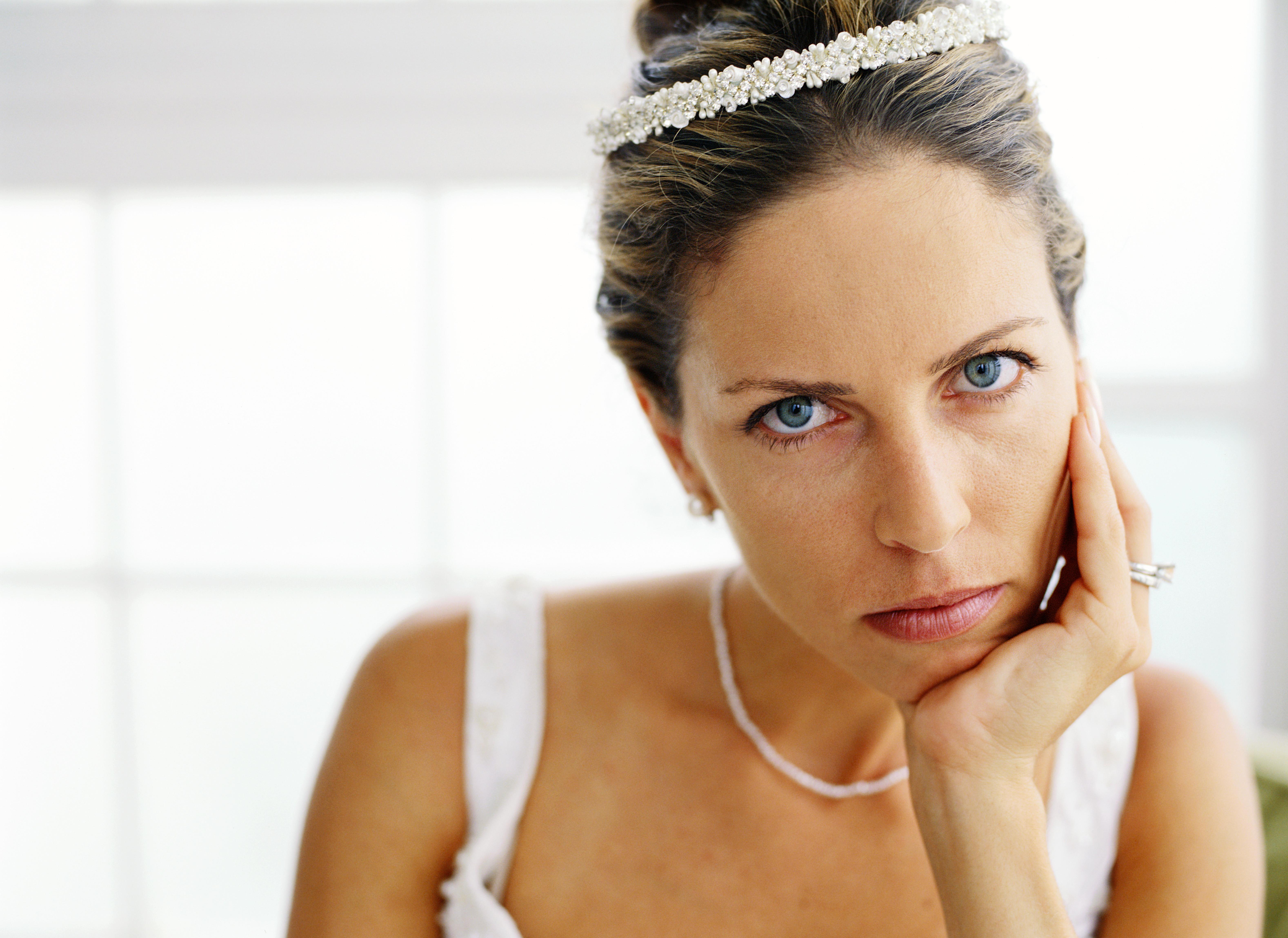 Others were shocked the bride had referred to her friends and family as "murderers", explaining: “I totally understand serving vegan food exclusively, that makes sense … but banning people and calling them murderers is just ridiculous."

"As a vegan, this is messed up, … you can’t go around calling your family murderers!" Said another. 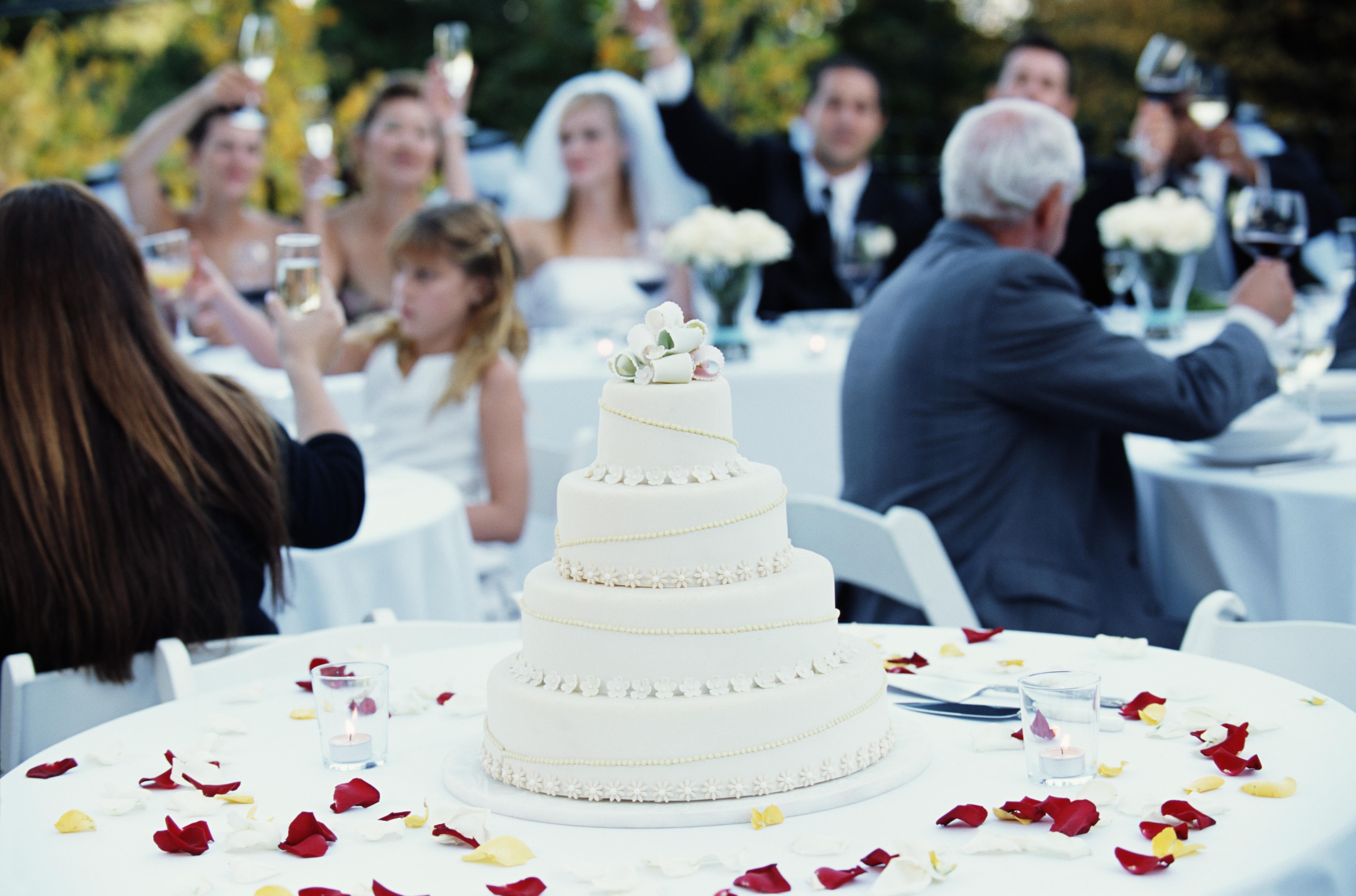 Shocked at the response, the vegan bride tried to offer a little more context to her decision – but was still met with negativity from other users.

"They have consistently attacked me and my partner just for being vegan,” she revealed.

“When I broke the news to them, all I got was attacked because I don’t want the weight of having people that still kill animals (the very beings we are trying to protect) at my wedding on my conscience.

“I’m sorry if that makes me ‘rude’ or a ‘b**ch’ because I’m not compromising the ethics that I share with everyone here." 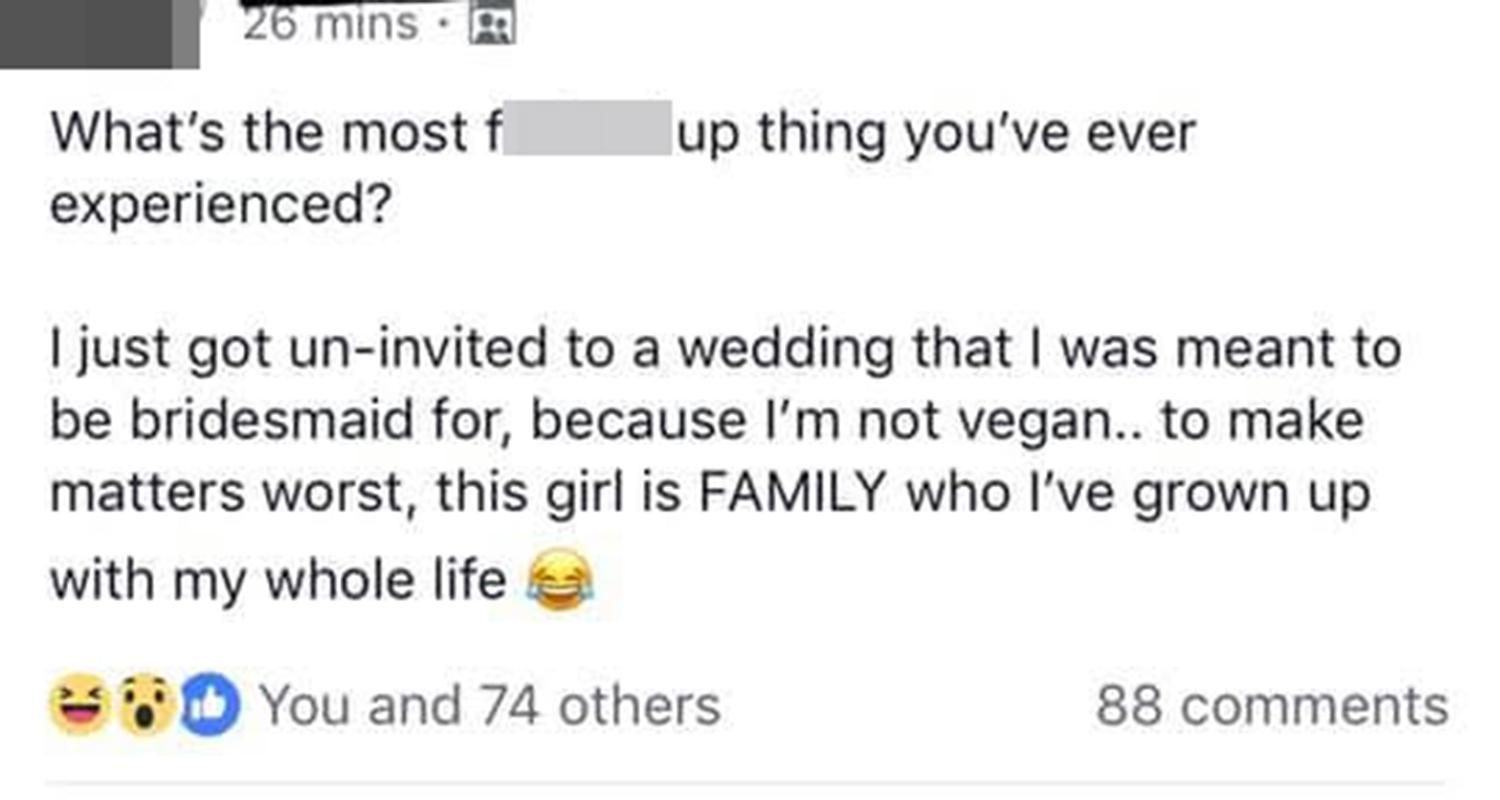 Shortly after the bride's outburst, another social media member – who many believe to be a member of the family – posted, explaining that despite being a bridesmaid, she had also been uninvited from a wedding.

“What’s the most f***ed up thing you’ve ever experienced?

“I just got un-invited to a wedding that I was meant to be a bridesmaid for, because I’m not vegan.

“To make matters worse, this girl is FAMILY who I’ve grown up with my whole life.”

Earlier this week, we told you Asda have done a £10 version of the £450 Gucci New Ace trainer and it’s selling out fast.

We also revealed Holly Willoughby’s sold out £60 Mango dress is still available in all sizes on ASOS.

And we showed you Fashion Nova is selling bizarre ‘cage’ trousers and shoppers are baffled.

FANCY getting away from it all?

This means you could book a break at one of 333 holiday parks across the UK and abroad, for under a tenner!

All you need to do is collect TEN Sun Savers codes or TEN tokens or codewords printed in The Sun. This round is running between Saturday, January 5 and Tuesday, January 29.

If you're collecting tokens or codewords use the booking form or book online at thesun.co.uk/holidays