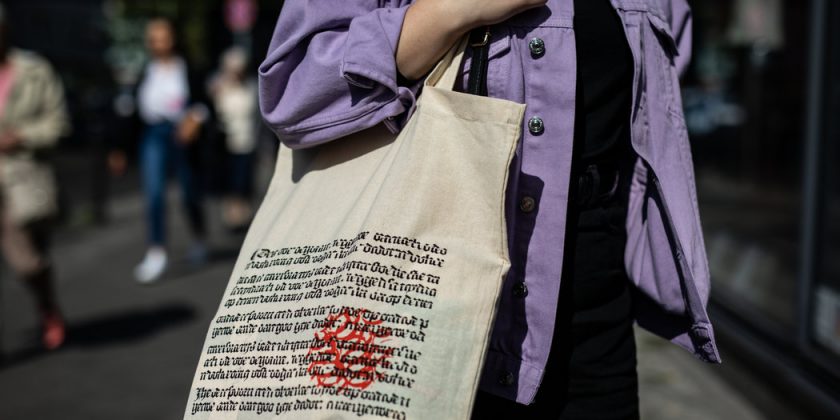 In Berlin, the bag is everywhere. Hot young dads slip it over one shoulder. Older German women pull knitting from its mouth. This canvas tote is carried by 12-year-olds on field trips, by harried white-collar workers with their laptops, by the homeless and by many, many stylish people.

Its design — black Gothic print interrupted by what vaguely resembles a red wax seal — is distinctive. It gives off the illusion of readable text, leaving passers-by squinting after it, trying to decipher its meaning.

The bag is to Berlin what a New Yorker tote is to that magazine’s namesake metropolis, or a London Review of Books tote is to its hometown (and, interestingly, Seoul). Yet it signifies nothing in particular and has no known designer.

I cornered one of the sharply dressed start-up guys with the bag slung over his shoulder at Weinmeisterstraße U-Bahn to ask where he’d got it, and was met with a brusque “keine Ahnung” (no idea). Some weeks later, when I was too nervous to approach the tall, beautiful women walking down Hermannstraße with the bag, my sister obligingly chased after them to ask.

“Actually, I’m not sure,” one of them said. “I think I stole it from my roommate?”

Finally, in July, at Berlin’s Dyke March, a group of young women covered in glitter told me it was from Hugendubel, one of Germany’s largest bookstore chains. Walking into one of its locations in Berlin was at once revelatory and deeply embarrassing: The design was everywhere, even on the wallpaper, and the bags themselves were available in a stacked pile by the register for €1.50 a pop, or free with a purchase over €50. 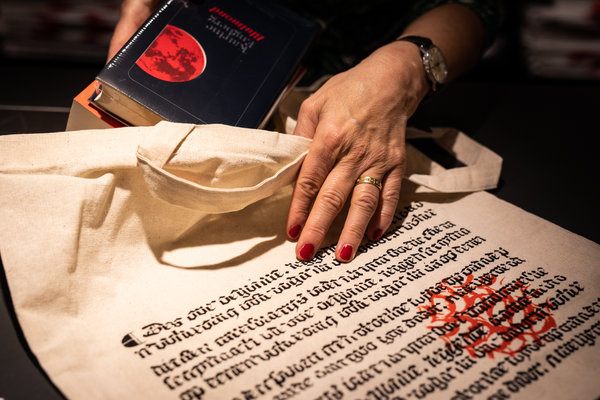 If I had been looking in south Germany, I might have had discovered its provenance sooner. Sarah Orlandi, the chief marketing officer for Hugendubel, told me that in Munich, where the bookseller is based and the bags are just as popular, brand recognition is at almost 100 percent; in Berlin, she said, it’s more like 50:50. Recognized or not, the bag is beloved. Ms. Orlandi wouldn’t disclose official sales figures, but she said the company dispenses between 60,000 and 120,000 units across Germany each year.

When she joined Hugendubel, Ms. Orlandi met with Nina Hugendubel, the great-great-granddaughter of Heinrich Karl Gustav Hugendubel, who founded the company in 1893. “Mrs. Hugendubel said, ‘O.K., you can do anything you want, but don’t touch the bag,’” Ms. Orlandi said. She has honored that request: “We will never touch the bag. The bag is holy.”

Even within Hugendubel, the tote maintains its mystique. Ms. Orlandi could not tell me who designed it, or what the text on the bag means. Neither could Ms. Hugendubel, nor anyone else at the company. They know only that it was commissioned in the mid-60s from an unknown designer by Ms. Hugendubel’s father, Heinrich, who died in 2005. As for the typography …

“It’s a sentence in an old, I think, Greek writing,” Ms. Orlandi said. “But no one knows what it is because they cut the sentence in the middle and then they put it together, but not cleanly.” The word she uses is “verwächst”: two things that have grown together and become entangled, like branches on a tree.

The text likely originates from Low German or Middle Dutch. But the writing, as far as experts were able to tell, doesn’t mean anything at all. Horst Simon, a professor in the Freie Universität Berlin’s department of German and Dutch philology, said, “There is neither a text nor a language to identify on this bag. What you see is a meaningless graphic representation of medieval textuality — not a text, not even letters.”

Dr. Simon guessed that the early Hugendubel designer took a collection of letters and perhaps words in black-letter writing, a form of script popular in western Europe in the late Middle Ages, before, as Ms. Orlandi suggested, cutting them horizontally and putting the images together randomly.

“Apparently, the bag’s designers wanted to create the idea of an old text without actually committing themselves to any particular real-life example,” Dr. Simon said. “In that sense it’s comparable to the ‘lorem ipsum’ place-holder text that is used by printers and book designers.” Now and then, “very rarely, by chance,” the letters form a word.

Lydia Zeldenrust, a lecturer in medieval literature at the University of York, agreed. “There are some recognizable words, but these are words that Middle Dutch and Low German have in common, so it’s hard to tell exactly which language it is.” Dr. Zeldenrust found words like “van god” and “legend,” which might suggest parts of the text come from a religious text or hagiography.

Berlin loves symbols, and is built around monumental ones that trace the highs and lows of the 20th century. There’s the Holocaust Memorial, with its enormous, claustrophobic blocks, and the TV Tower, completed in 1969, which rose eerily from behind the East German side of the Wall. Its nickname is “the Pope’s revenge”; when the sun hits it, a crucifix of reflected light appears.

The tote, on the other hand, doesn’t readily stand for anything. It invites interpretation but resists answers. And while it may now be sold by a brand, in the absence of a known creator, it belongs as much to the city as it does to anyone.