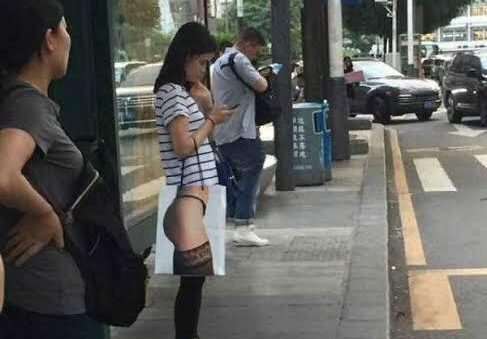 But thanks to an awkward optical illusion, that's exactly what one poor woman appears to have done.

In a snap shared on viral Twitter page You Had One Job, the woman can be seen standing on a pavement and checking her phone.

It's all very innocent, but unfortunately, the paper bag she's slung over her arm makes it look rather more X-rated.

The bag – which appears to be from a lingerie store – features an image of a woman's bottom half clad in a thong and stockings.

At first glance, the position of this print makes the unwitting shopper look half-naked. Oh dear.

One person commented: "If I was offered a shopping bag which looked like that I would ask for something else!"

To be honest, we have to agree.

Meanwhile, people think this innocent wedding photo is much ruder than it is… can you see the cheeky reason why?

Can YOU spot what's creepy about the picture on this children's toy?

And a woman's seemingly innocent bikini has a VERY awkward design flaw.