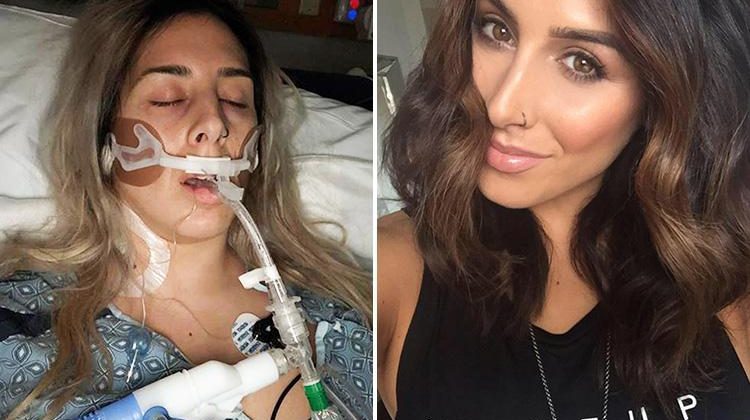 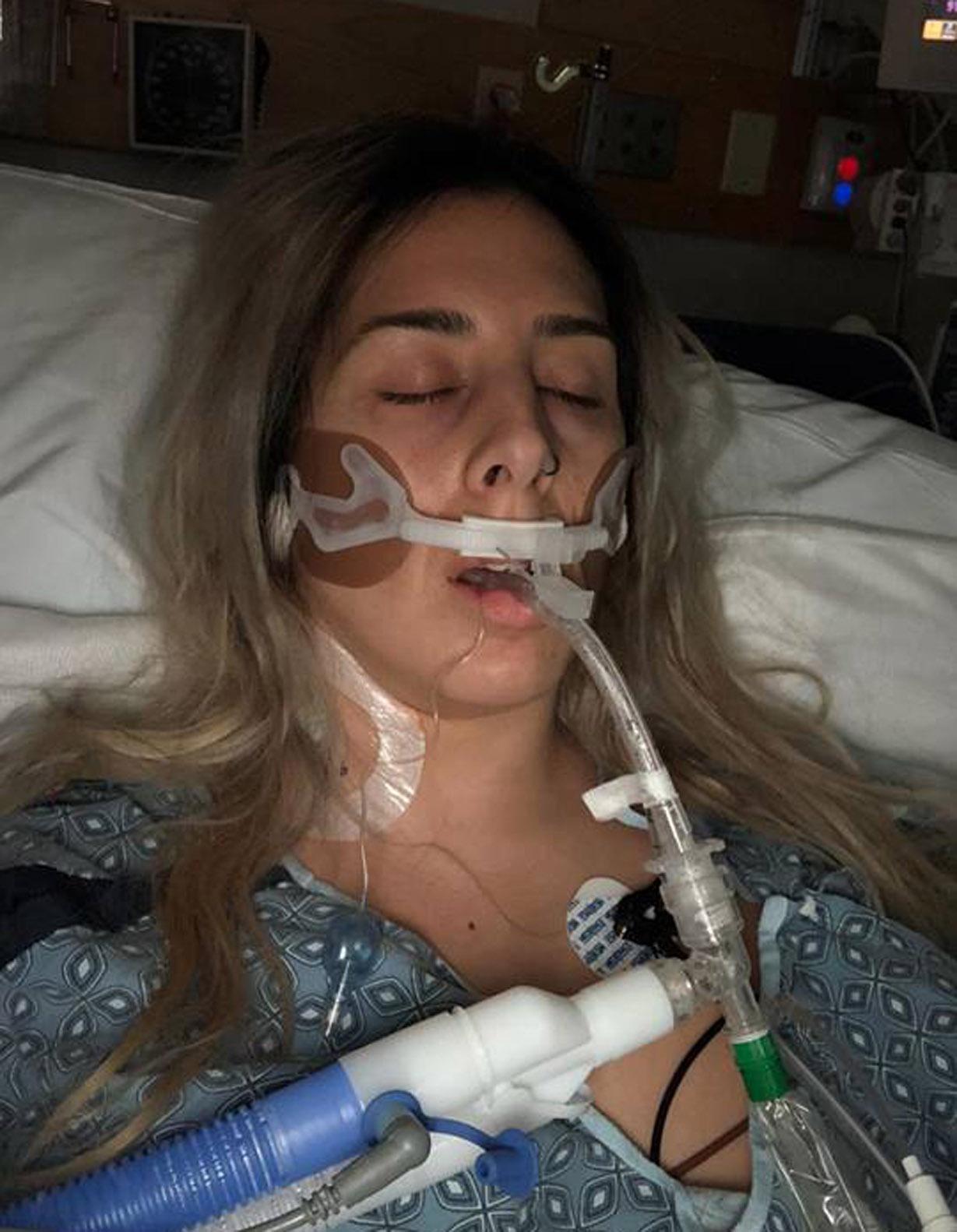 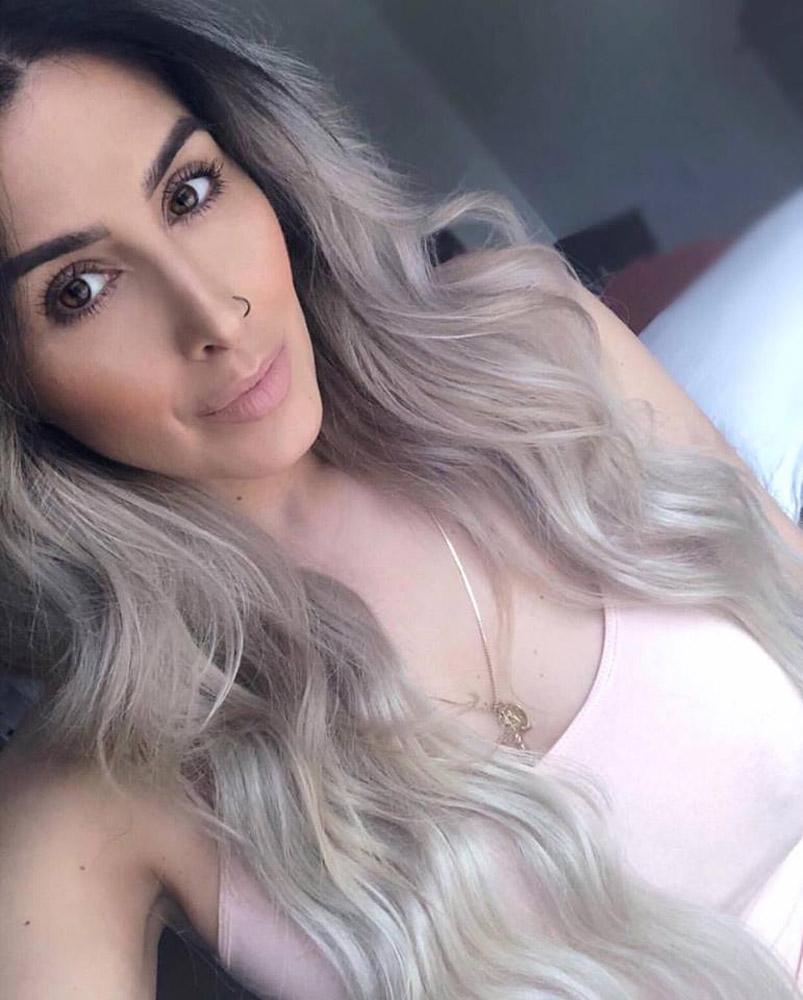 In January, she woke up feeling as if she'd been "hit by a truck", and visited a walk-in clinic – only to be sent home with suspected flu.

But when her mum Diane saw her the next day "looking like death", she drove her – by then vomiting bile continuously – straight to the hospital.

Kristina, from Massachusetts, USA, says that by the time she was seen by medics, she could barely walk.

She said: “I could feel my body shutting down, it was my worst nightmare. 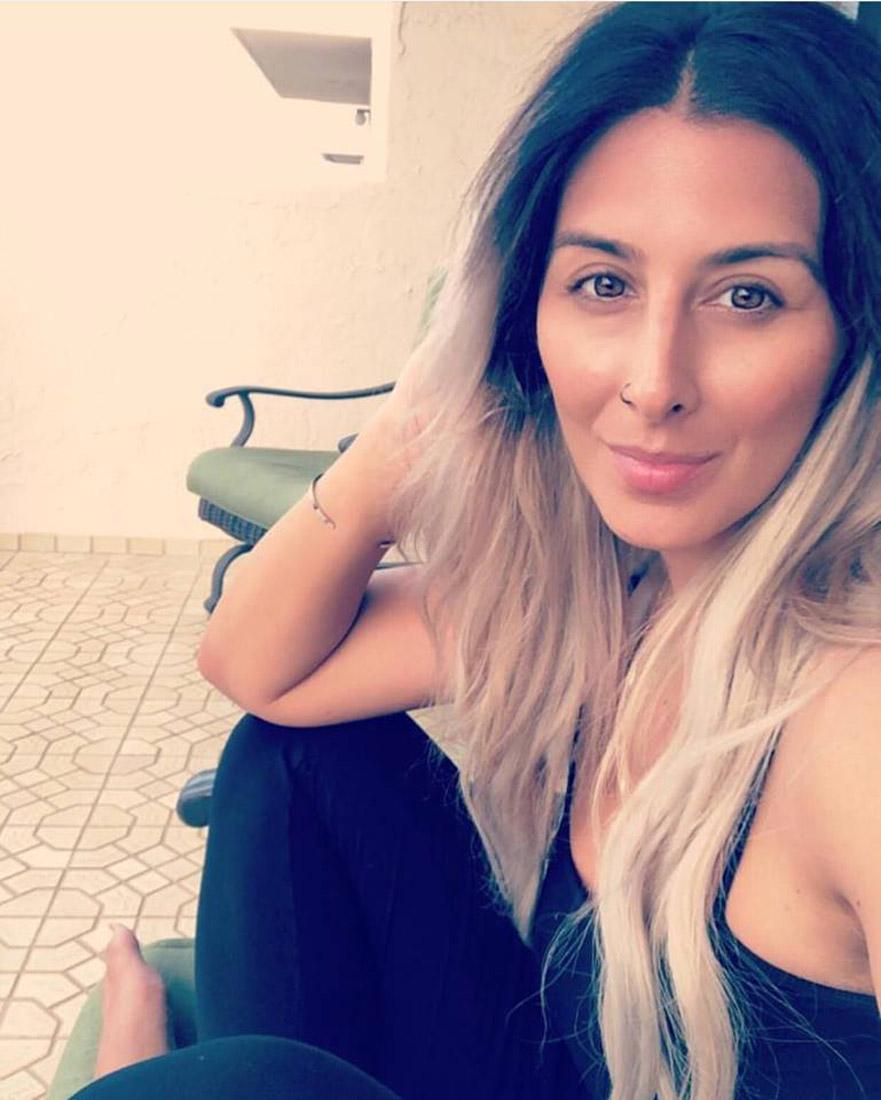 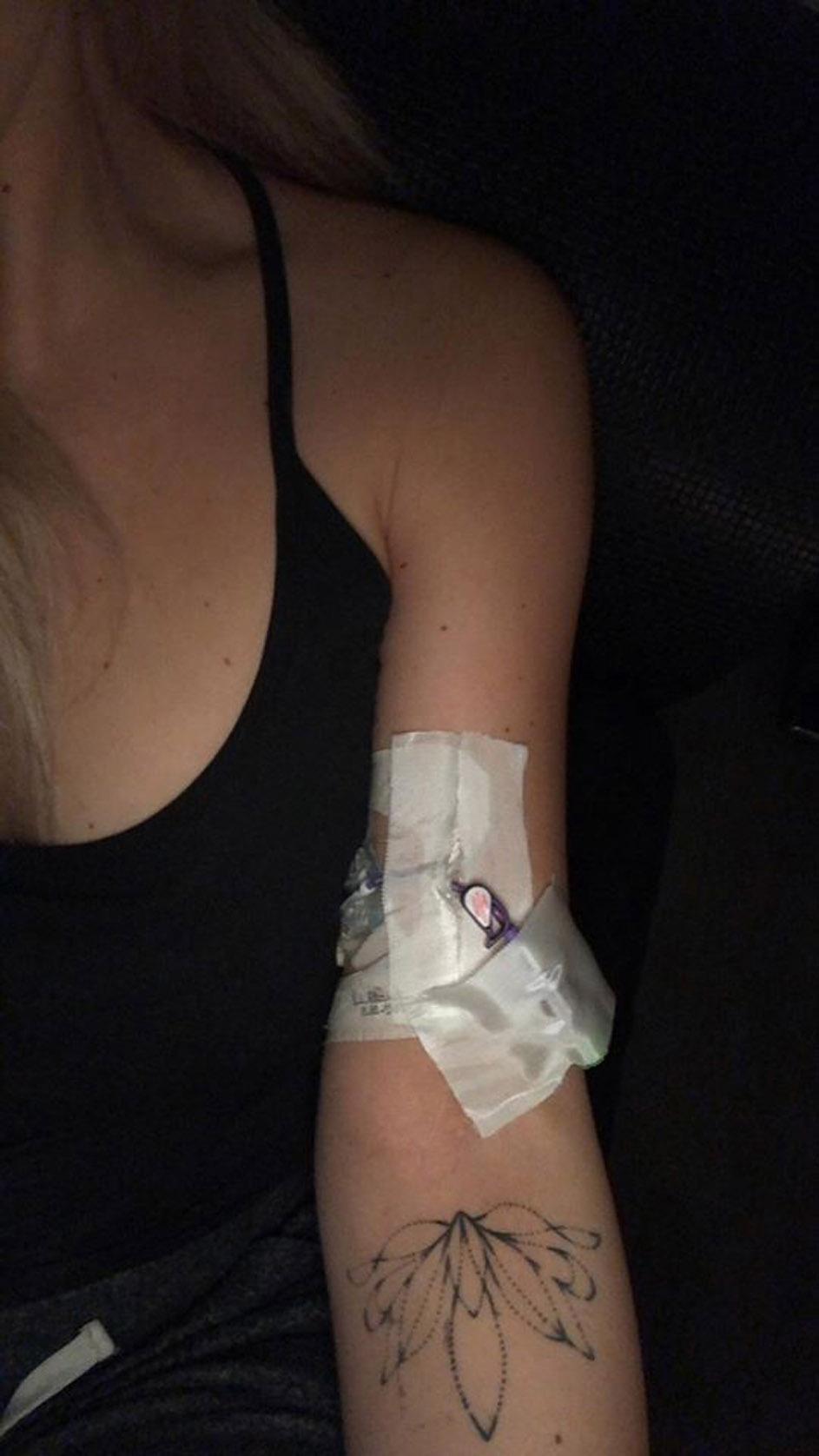 “Doctors pumped me with four different antibiotics and fluids to raise my blood pressure, making me gain 30lb in fluids, because of the sheer amount they were pumping into me.”

The waitress had recently switched to using organic tampons but began to feel unwell two weeks after her period ended.

A few days before she became ill, she noticed a swollen lump on her groin and assumed it was just a gym injury.

“I thought I had just pulled a muscle or something, but my body was clearly trying to tell me I had an infection. I was trying to feel better by eating a vegan diet and working out, but nothing was working." 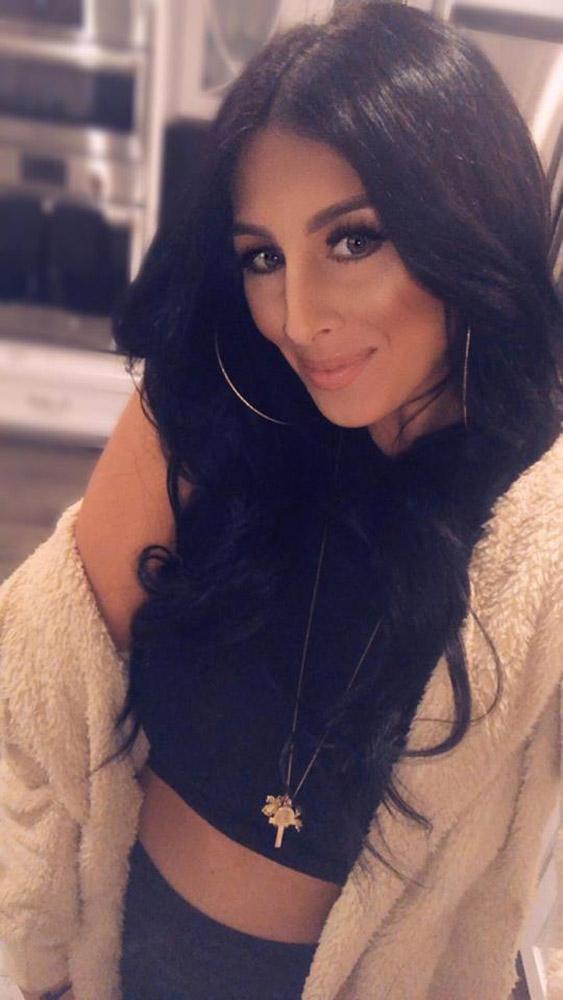 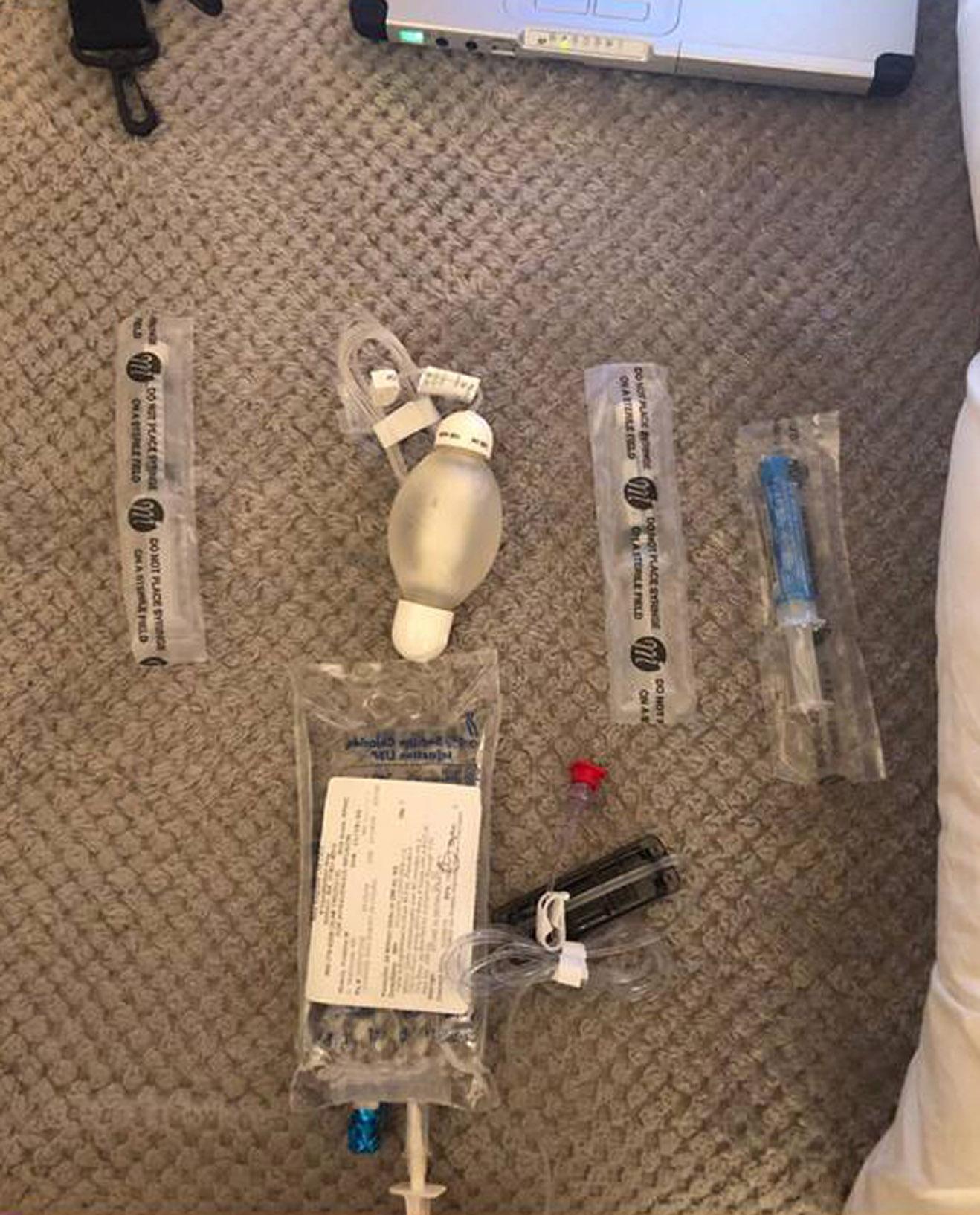 Soon after being admitted to hospital, she was moved to the ICU where her condition deteriorated. A rash on her leg was spreading fast and her vital signs were getting worse.

“By the time I was in the ICU I had lost track of time. I just remember the surgical team running towards me and telling me I had 45 minutes to make a decision about whether or not to have surgery.

“They gave me the time scale because it was urgent. If I didn’t decide fast it would be too late.

“I was so confused, I didn’t know what to say, or why I even needed surgery, until I was told I needed the procedure immediately or I would lose my left leg.”

What is Toxic Shock Syndrome?

Toxic shock syndrome (TSS) is a rare but potentially fatal condition caused by bacteria getting into the body and releasing harmful toxins.

Your condition will deteriorate rapidly and the infection can cause organ failure, or eventually death, if not treated immediately.

How to reduce your risk:

There are a number of ways you can reduce your risk of getting TSS:

If you’ve suffered from TSS before, stop using tampons and female barrier contraception.

Three days after she woke up from surgery, Kristina was told by her surgeon and the infectious disease doctor what had caused her ordeal.

“They told me the rash on my thigh had gone septic and I had suffered from toxic shock," she explained.

“I was quizzed about everything I had done in the days leading up to the sudden sickness and we soon realised it was down to the organic tampons I had used.

“Because they were incredibly dry, as I pulled one out after use, I’d managed to scratch the wall inside my vagina, leaving it open to infection.”

She added: “It never once occurred to me that I could have lost my life due to something so simple.”

After two weeks in hospital, she was discharged and it took another three months for her to get her strength back. 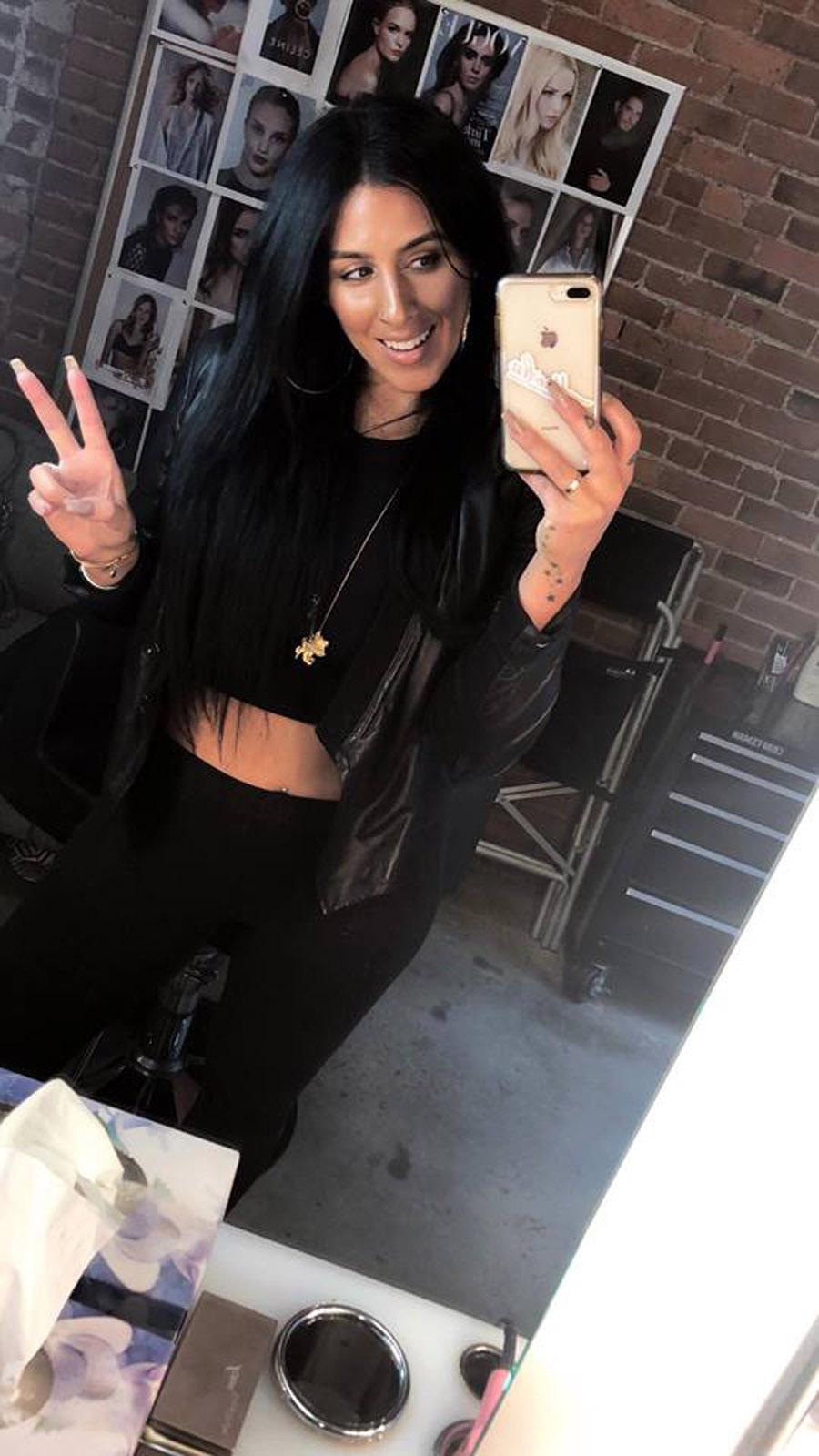 All that time, she had to have a wound vac – a small device fitted with a plastic tube – to clear the infection from her thigh.

"Meanwhile, all the bile I threw up has ruined my teeth and enamel and I don’t think they’ll ever feel the same again.”

Kristina has now been advised by docs to avoid using tampons again.

She said: “I hardly knew anything about toxic shock, apart from that when I was 12 and began my period, I was told to never leave a tampon in for too long.”

“I followed all the rules but this still happened to me. Now I feel trauma when I see a tampon.”

“It’s made me understand that this is a condition that can affect any woman if they’re not careful, and we need to raise awareness.”

While toxic shock is rare and tends to be caused by leaving tampons in for too long, Emma Soos, MD of Women's Health Clinic says that all tampons are not without their risks.

She said: “The main reason women get toxic shock is the fact that they leave tampons in for too long.

“Organic or not, the risks are the same, but if you have changed the brand of tampon you use, it could cause a reaction if you an unfamiliar to anything different used in that product.

“In Kristina’s case, it could be down to how absorbent the product was – but we likely cannot pin it to down to one particular cause in this case.”