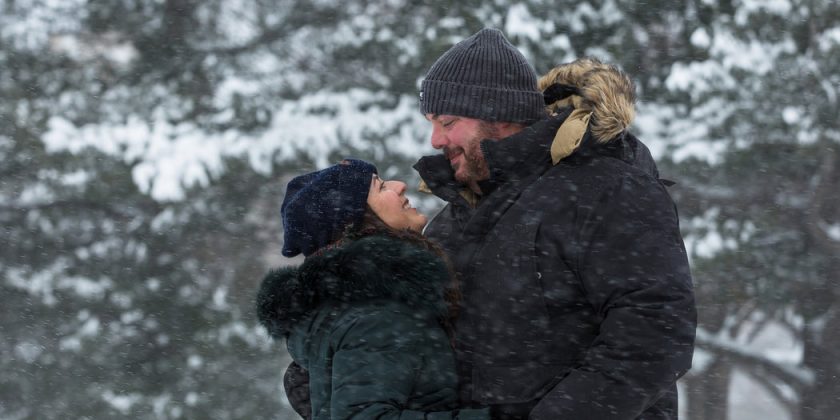 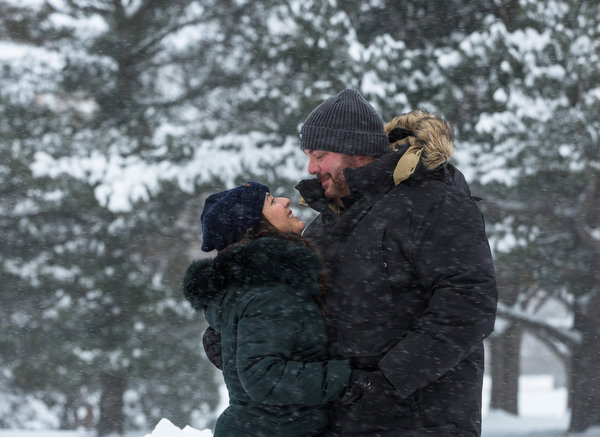 Suzanne Lynn Grossman and JB Sugar met in May 2011 on an airplane that was about to leave New York for Florida. When Ms. Grossman, who is 5 feet 3 inches, arrived at her designated seat, she realized it was located between two tall men who were already seated, one of whom was Mr. Sugar, who is 6 feet 3 inches.

“How lucky are you that a 5-foot-3-inch woman is sitting next to you instead of another tall guy,” Ms. Grossman playfully said to Mr. Sugar, who was on his way to a digital media convention in Fort Myers, Fla.

Mr. Sugar looked up from the newspaper he was reading, laughed and said he thought to himself, “Huh, she’s pretty cute.”

Moments later, Ms. Grossman floored Mr. Sugar by asking him, “Who won that fight last night?” She was referring to a light-heavyweight championship bout between Jean Pascal and Bernard Hopkins, who, at 46, was attempting to become the oldest world champion in history.

“Did you really just ask me that?” Mr. Sugar said.

After telling her that Mr. Hopkins had won, Mr. Sugar added that his father, Bert Sugar, was a boxing authority and raconteur. (Bert Sugar died the following year.)

Ms. Grossman, a boxing fan who grew up watching sports with her three older brothers, texted one of them, asking if he had ever heard of the name Bert Sugar. Within seconds he texted her back: “Bert Sugar is the king.”

Their conversation continued, and as it turned out, Ms. Grossman and Mr. Sugar, who were both living in Manhattan and working in the digital advertising industry, were heading to the same conference.

“I was thrilled to hear that,” Mr. Sugar said.

During their chat above the clouds, Ms. Grossman told Mr. Sugar that the sport of boxing was also in her blood. Her great-uncle, the late Leonard Rodman, a pharmacist who owned Rodman Discount Drugs in Bethesda, Md., had gone to the University of Maryland on a boxing scholarship, and later invested money that went toward the training of professional fighters, the most notable of them the former heavyweight champion Riddick Bowe.

Barbara DeBolt Roy and Robert Ford Greene met on eHarmony in March 2016. At the time, Ms. Roy was living in Naples and Dr. Greene, who has an apartment in Riverdale, the Bronx, was renting another in Palm Beach, Fla.

After getting acquainted through long letters exchanged via email, Dr. Greene, who normally shipped his car by rail to and from Palm Beach, boarded an airplane for the first time in 27 years, as he was eager to return to New York, where he had arranged to meet Ms. Roy.

“I could feel we had this great chemistry together,” said Dr. Greene, who is known as Bob.

They met on the steps of the Metropolitan Museum of Art on an early morning in May 2016, Dr. Greene arriving with a box of chocolates.

“We had shared so much in our emails about our lives, that we felt we already knew a lot about each other,” said Ms. Roy, who has 11 children, six of whom are adopted. (Dr. Greene has no children.)

As they shared their first conversation, Dr. Greene leaned over and gave Ms. Roy a kiss on the cheek, “which felt so natural” she said. They proceeded to walk to Central Park, where they sat by the lake, as strangers began taking photos of them.

“One couple came up to us and asked how long we had been married,” Dr. Greene said.

They went to a nearby restaurant and chatted the rest of the day away, and the following day Dr. Greene picked up Ms. Roy at a Midtown hotel and they went to his Riverdale apartment.

“I knew everything was going to work out great between us,” she said, “everything just clicked.”

Sarah Rose Riedl and Brandon Christopher Clark were married Jan. 26 at the Mid-America Club in Chicago. Heather E. Moran, a friend of the couple who became a Universal Life minister for the occasion, officiated.

The bride and groom are each changing their middle name to Riedl.

Mrs. Clark, 30, is a lawyer in the Chicago office of the San Francisco law firm Gordon & Rees. She graduated from the University of Illinois and received a law degree from Wake Forest University School of Law.

She is a daughter of Lisa A. Riedl and Warren L. Riedl of Elgin, Ill. The bride’s father is a mold maker of plastic closures at the Armin Tool and Manufacturing Company in Elgin. Her mother, a court reporter, is the owner of Janson Reporting Services in Elgin.

He is the son of Debra L. Clark and Jeffrey L. Clark of Ham Lake, Minn. The groom’s mother is a special education paraprofessional at Andover High School in Andover, Minn. His father is a computer programmer at NovuHealth, a consumer health platform, in St. Louis Park, Minn.

The couple met in 2015 through a mutual friend who called Ms. Riedl as a last-minute stand-in for another woman, whom Mr. Clark was originally supposed to meet for after-work drinks in downtown Chicago. When drinks were over and they parted ways that night, Mr. Clark texted Ms. Riedl, asking about another date.

Ms. Gelles, 30, is program manager in research and development for the Houston Astros.

She is a daughter of Sharon Gornstein and Jeff Gelles of Philadelphia. The bride’s father retired as a business columnist for The Philadelphia Inquirer. Her mother is a partner in Leventhal Sutton & Gornstein, a law firm in Bucks County, Pa.

Mr. Thrope, 31, is a trial lawyer in the civil division of the Department of Justice in Washington. He received a law degree from Harvard.

He is a son of Arlene Thrope and David Thrope of Westport, Conn. The groom’s father, a certified public accountant, retired as a partner in Ernst & Young, formerly with the firm’s New York financial services office.

Jennifer Turnbull Carl and Samuel Scappaticci Brickfield were married Jan. 26 at the Metropolitan Club in Washington. Inosi Nyatta, a cousin of the bride, received permission from the Superior Court of the District of Columbia to officiate.

The couple, who are both 29 and associates at law firms in New York, met at the University of Virginia, from which each received a law degree.

She is a daughter of Joan T. Carl and Bernard J. Carl of Palm Beach, Fla. The bride’s father, a former law clerk to Justice Thurgood Marshall, is a retired lawyer and private equity executive who held several presidential appointments in the housing and banking sectors. Her mother is the owner of the Paris-based company D. Porthault, a maker of bedsheets, towels and other linens.

He is a son of Nancy J. Scappaticci and Paul B. Brickfield of Wyckoff, N.J. The groom’s mother is a knowledge management consultant lawyer for the real estate group of Shearman & Sterling, a law firm in New York. His father is a criminal defense lawyer at Brickfield & Donahue, a law firm in River Edge, N.J.

The bride, 33, is a development associate at the Jewish Federation of Greater Pittsburgh. She graduated from Trinity University in San Antonio and received a law degree from Valparaiso University in Valparaiso, Ind.

The groom, 29, is the director of business development at Wolf Consulting, an information technology consulting firm based in Pittsburgh. He is also a member of the chief executive training program at Alpine Investors, a San Francisco-based firm. He graduated from Vanderbilt and received an M.B.A. from Northwestern.

He is a son of Patrisha O. Hyman and Michael D. Hyman of New York. The groom’s mother is an interior designer in New York. His father is a business broker in private practice in New York.

Dr. Alexandra Marie Ristow and Colin Patrick McDonell were married Jan. 26 at the Kualoa Ranch, a private nature reserve and cattle ranch in Kaneohe, Hawaii. Judge Richard Clifton of the United States Court of Appeals for the Ninth Circuit, with chambers in Honolulu, officiated.

The bride, 32, is a primary care physician and the medical director of the Lakeland, Fla., market of ChenMed, which provides health care for low- to moderate-income older people. She received a medical degree from Yale and completed an internal medicine residency at the University of California, San Francisco.

She is a daughter of Therese A. Ristow and Gary J. Ristow of Lenexa, Kan. The bride’s father is the parks and recreation director for the City of Lenexa. Her mother, who is retired, was a paraeducator for special-needs students.

The groom, 33, is a federal prosecutor in the special victims section at the United States attorney’s office in Tampa, Fla. He received a law degree from Stanford.

He is a son of Susan A. McDonell and Daniel J. McDonell of Carnation, Wash. His father, a retired route salesman at Frito-Lay, now works as a crew member at Trader Joe’s in Bellevue, Wash.

Jennifer Morrison and Stuart Douglas Andrew Grant were married Jan. 26 at the Fermenting Cellar, an events space, in Toronto. David G. Stinson, a judge of the Ontario Superior Court of Justice and an uncle of the bride, officiated.

Ms. Morrison, 42, is an executive producer of etalk, a daily celebrity entertainment show based in Toronto. She graduated from Queen’s University in Kingston, Ontario, and received a postgraduate degree in journalism from Centennial College in Toronto.

She is the daughter of Katherine A. Morrison and John H. Morrison of Toronto. Her father retired as an appointed tribunal member of the Veterans Review and Appeal Board of Canada. He conducted hearings of decisions made on disability claims of members and former members of the Canadian Armed Forces and the Royal Canadian Mounted Police.

The groom, also 42, is the chief of the compliance office at HGC Investment Management, a hedge fund based in Toronto, and is pursuing a master’s degree in finance through Boston University. He graduated with a diploma in sports administration from Durham College in Oshawa, Ontario, and a bachelor’s degree in business administration from Belmont University in Nashville.

He is a son of Candace T. Grant of Utica, N.Y., and Kenneth A. Grant of Toronto. The groom’s mother is the associate dean and a professor of business programs at Utica College. His father is a professor and the chair of the entrepreneurship and strategy department at the Ted Rogers School of Management at Ryerson University in Toronto. He is also the founding director of the Ted Rogers School of Information Technology Management there.

The couple met on the dating app Tinder in August 2015, after Mr. Grant just made it within Ms. Morrison’s very strict geographical boundary of 10 kilometers, or 6.2 miles. Ms. Morrison has historic ties to their wedding location, the Fermenting Cellar, which is part of the Gooderham & Worts Distillery District. Her great-great-great-great grandfather William Gooderham founded the distillery in 1837, which was later sold by the family in 1922. At one time, the distillery was the largest in the British Empire, and was said to have been a supplier to Al Capone during Prohibition.

She is a daughter of Dr. Candyce Silver and Dr. David P. Goodman of Muttontown, N.Y. The bride’s parents are psychiatrists in private practice, based in Bayside, Queens.

Mr. Mandel, 32, is an investment analyst at Discovery Capital Management, a hedge fund in South Norwalk, Conn. He graduated from Dartmouth, and received an M.B.A. from Harvard. He is the treasurer on the board of CitySquash, a nonprofit after-school enrichment program for children in the Bronx and Brooklyn.

He is a son of Susan Zadek Mandel and Stephen F. Mandel Jr. of Greenwich, Conn. The groom’s mother is a trustee of the Environmental Defense Fund in Manhattan and of Vassar College in Poughkeepsie, N.Y. His father is the managing member of Lone Pine Capital, a money manager in Greenwich, of which he is the founder. He is the chairman of the board of Teach for America in Manhattan.

The couple met at a West Village bar in June 2016, the first evening Ms. Goodman moved back to Manhattan shortly after graduating from business school.