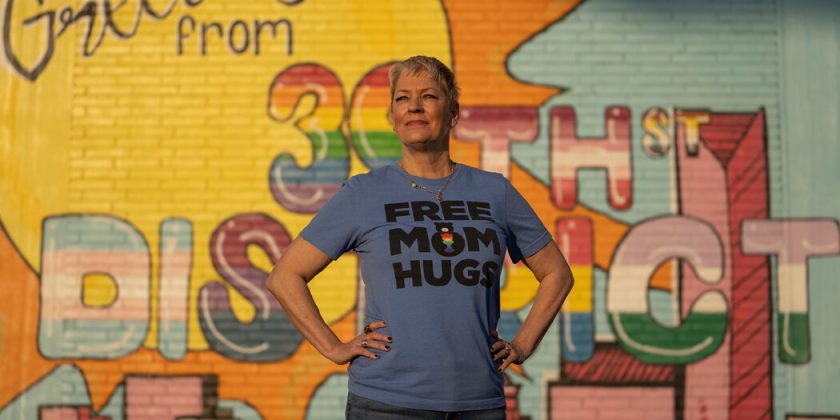 It all started with one mom and one hug. This mom was Sara Cunningham, who lives in Oklahoma City and is married with two children, Travis, 37, and Parker, 32.

“Parker is gay,” she said. “I specify this because he’s the reason we’re having this conversation.”

As a Christian, Ms. Cunningham, 58, fervently rejected her son being gay when he first came out to her 11 years ago at age 21. After much spiritual searching, she embraces him fully, and said she doesn’t want any child to suffer what she put her son through. “There’s a mom out there like me then who needs a mom like me now,” Ms. Cunningham said.

That was why she founded the nonprofit group Free Mom Hugs in July 2018.

After reading stories about L.G.B.T.Q. people whose families refused to attend their wedding, Ms. Cunningham had posted on Facebook one night that she would happily be a stand-in mom at any wedding where she was needed. By the next morning, her post had gone viral.

Under the Free Mom Hugs banner, Ms. Cunningham, who was ordained in 2016 by Neill Coffman, pastor of the Expressions Church in Oklahoma City, now performs and attends weddings, writes books, speaks at various events, organizes local chapters of Mom Hugs, and, yes, gives out a lot of hugs. (“Until we can hug again, we’re going beyond the hug,” she said. For example, they send out care packages to people in need of support.)

She is now working with the actor Jamie Lee Curtis on a movie for the Lifetime channel based on Ms. Cunningham’s book, “How We Sleep at Night: a Mother’s Memoir,” published in 2014, to which Ms. Curtis purchased the rights. An upcoming documentary by director Daresha Kyi called “Mama Bears” also features Free Mom Hugs and Ms. Cunningham.

In a telephone interview, Ms. Cunningham talked about how she works to change the world, simply by showing up.

How did you come to accept and embrace your gay son?

I found faith-based resources to better understand the history of homosexuality. I met other moms of gay children and met members of the gay community. I thought my son was going to burn in hell. So, I needed to reconcile my faith of a loving God with the suggestion that this was an unforgivable sin. The truth is, there is no scripture that condemns homosexuality.

Where did you get the idea for Free Mom Hugs?

It was Saturday, June 20, 2015. I made a homemade button with the words “Free Mom Hugs” and pinned it to my sundress. I stood at the Oklahoma City Pride Festival and offered anyone who made eye contact with me a free hug. The very first hug went to a beautiful girl.

We embraced, and she whispered in my ear, “It’s been four years since I got a hug from my mom because I’m a lesbian.” I must have given hundreds of hugs that day, with each one came a similar story.

What was the first wedding you officiated?

It was in 2016 in Natchez, Miss. The brides were Jill and Denise. We met in 2015 when my husband and I were on vacation in Virginia Beach, and we all just happened to stay at the same hotel. They were the first same-sex couple to be married at their local community center, and they made front page news. They are the reason I got ordained.

How did it go from an idea to an organization?

After making the button and showing up and giving hugs, we had a Free Mom Hugs banner made and walked in the 2016 parade. I was just making it up as I went. But when my friends Pastor Neill Coffman and his husband Dean Coffman, who run a nonprofit called Expressions Community Center in Oklahoma City, invited me to umbrella under their nonprofit, that’s when it became real in my mind.

[Sign up for Love Letter and always get the latest in Modern Love, weddings, and relationships in the news by email.]

What is your favorite Free Mom Hugs story?

I met a young, African-American transgender college student at the very first Free Mom Hugs Transgender Valentines Banquet in Oklahoma City. It was his first time “out.” Struggling to keep a job, he became homeless. An agency helped him get an apartment. But it became unsafe because of harassment from neighbors.

Extended family from out of state offered to let him stay with them. Free Mom Hugs bought him a bus ticket. Years later he planned to fly back for the third annual Transgender Banquet. He missed his flight. Feeling discouraged he bought a lottery ticket and won $10,000, enough for top surgery (male chest reconstruction).

I missed the entire adolescence of my son’s life. I shamed him with the best of intentions. I shamed him to get rid of his journals. He had to check himself at the door. He had to pretend to be someone else in his own home. It alienated us for a long time. But I’m fortunate that we have a relationship now.

Do you see Free Mom Hugs as particularly vital during Covid?

Yes. Recently, an 18-year-old transgender kid struggling to survive Covid in isolation at home with unsupportive parents told me, “I’m surviving with the hopes of meeting you one day to say thank you face to face.”

If you could speak to parents who don’t support their L.G.B.T.Q. children, what words of support would you offer?

It’s OK to search this matter out. The only other choice is to remain in fear and ignorance. Your child is entrusting you with the most tender and intimate part of his/her/their lives.

If you don’t come to the point where you can celebrate with your child, you’re going to suffer with them.

How can people help?