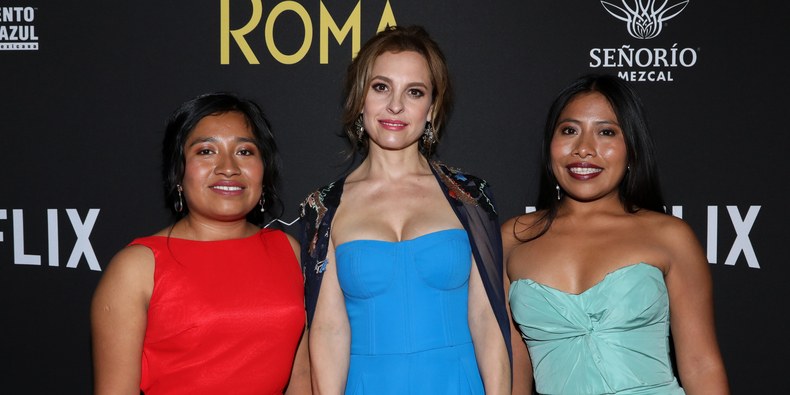 Though it's only been available on Netflix for one weekend and in select theaters for just a few weeks longer than that, Roma has already raked in countless awards and nominations, stolen the hearts of viewers around the world, and, as of Monday, is shortlisted for the Best Foreign Language Film award at the 2019 Academy Awards. Later on Monday, the female leads of Alfonso Cuarón's moving drama, Yalitza Aparicio, Marina de Tavira, and Nancy García, continued this impressive streak by walking the red carpet at Roma's Mexico City premiere in a trio of gorgeous, colorful ensembles.

Aparicio attended the premiere, which took place in the capital city's Cineteca Nacional, in a floor-length, Tiffany blue gown that had a strapless sweetheart neckline, a fitted bodice, and a flowing A-line skirt. She wore her long, dark hair down and straight, and complemented her turquoise dress with a dark crimson lip color.

De Tavira also chose a blue ensemble for the premiere, though she opted for a bright cerulean jumpsuit, rather than a gown. Over the strapless jumpsuit, which featured wide, floor-skimming pant legs, de Tavira wore a sheer navy blue cape with detailed embroidery at the shoulders, and which fell nearly to her feet. She accessorized with dramatic starburst earrings, smoky eye makeup, and a magenta lipstick.

García, meanwhile, interrupted her costars' blue wave in a vibrant red gown. The sleeveless satin dress had a bateau neckline, a nipped-in waist, and a floor-length skirt that was overlaid with a sheer, floaty layer of red organza. Her hair was swept up in an updo with a few tendrils pulled out and curled around her face, and she wore a rosy pink blush and matching lipstick.

The glamorous outing came mere hours after Aparicio was announced as the cover star of Vogue Mexico's January 2019 issue, making her one of only a very small number of indigenous Mexican women to be featured in the nearly 20-year-old magazine. "Certain stereotypes are being broken: that only people with a certain profile can be actresses or be on the cover of magazines," Aparicio said in a video released alongside the cover image, in which she wears an elaborate Dior gown. "Other faces are now being recognized. It is something that makes me so happy and proud of my roots."

In Roma, Aparicio (in her onscreen debut) plays Cleo and García plays Adela, both of whom are maids in the household of de Tavira's character, Sofia. The film, which is set in the early 1970s, received several awards throughout its many festival debuts, including the Venice Film Festival's prestigious Golden Lion, and has been labeled a "masterpiece" by critics and viewers alike. It's now available on Netflix and, for a short time, can be seen in select theaters.

See Aparicio, de Tavira, and García in the Roma trailer, below: