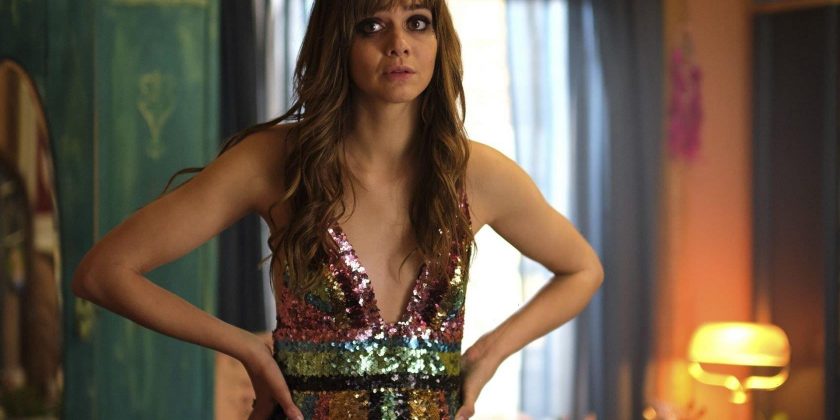 As the TV adaptation of Dolly Alderton’s bestselling memoir debuts on the small screen, one writer reflects on the nostalgic power of the show’s costumes.

When Dolly Alderton’s Everything I Know About Love finally graced the small screen yesterday at 10.40pm there were a few things that stood out.

Brimming with American Apparel disco pants (IYKYK), shorts and tights, Fred Perry polo shirts and more Kate Moss for Topshop flippy dresses than you could shake a stick at, the focal point of the show, for me, was less about female friendship and more about the fashion, which took me back to teenage Naomi and her array of questionable sartorial choices.

I remember queuing in line to buy the buttery-yellow chiffon mini that Kate Moss had designed for Topshop; I remember saving the money from my part-time job to buy those questionable skin-tight, Sandy-esque American Apparel disco pants; and I remember where I was when I had my first kiss wearing yet another high street floral mini dress with those brown River Island brogues.

The cast of BBC’s adaptation of Dolly Alderton’s Everything I Know About Love.

After all, if there’s anything that defined the 2010s in popular culture (at least in the realm I paid most attention to) it’s fashion. The era that spawned the Tumblr aesthetic – defined by the aforementioned American Apparel staples, Jeffrey Campbell Lita boots, One Teaspoon shorts, Alexa Chung’s enviably chic bangs (they never did look quite as good when framing the face of anybody else) and high-top trainers (gulp) – provided a revolving buffet of questionable trends that feature heavily in the series.

Set against the backdrop of Camden in 2012, the show revolves around the friendship of four girls as they make their way through the no man’s land that is your 20s. Without providing any spoilers, viewers can expect questionable relationships, hairstyles, life choices and, more importantly, outfits.

Everything I Know About Love is available to watch on BBC iPlayer now.

“What is the one thing you and I have always sworn to each other?” Maggie probes Birdy in the first episode, as she preps for her first real date.

“That we would never wear a waist belt with a dress,” Birdy replies, tail between her legs, clad in the sort of black chiffon flippy dress that defined Topshop’s 2010s offering.

If that strikes a chord with anybody old enough to recall 2012, then the rest of the season’s sartorial offering will surely serve up a dose of wistful nostalgia.

“It was my favourite place to hang out,” the show’s creator Dolly Alderton says. “I often would just go and hang out in the costume department – all the clothes were so authentic. Basically, everything is from a high street shop in 2012 or from a vintage shop in Camden. There’s this specific smell of vintage shops in Camden where everything’s kind of cool but also kind of flammable.”

Everything I Know About Love features fringings and more flammable fashions than you could shake a stick at.

The Everything I Know About Love’s costume department similarly transported Bel Powley, the actor who plays the role of Birdy, back to the 2010s. “Setting something in 2012 is not quite old enough to be a standalone period piece but it is a decade ago and fashion has evolved since then,” she says. “I remember when Kate Moss did a collaboration with Topshop, which at the time was huge and I had about five of those things. My friends especially are going to be like, ‘Oh my god, that takes me right back.’”

And take you right back it will. All hail 2012, the year of flammable fashion that we can reflect upon fondly, while promising never to commit any of those faux pas ever again.