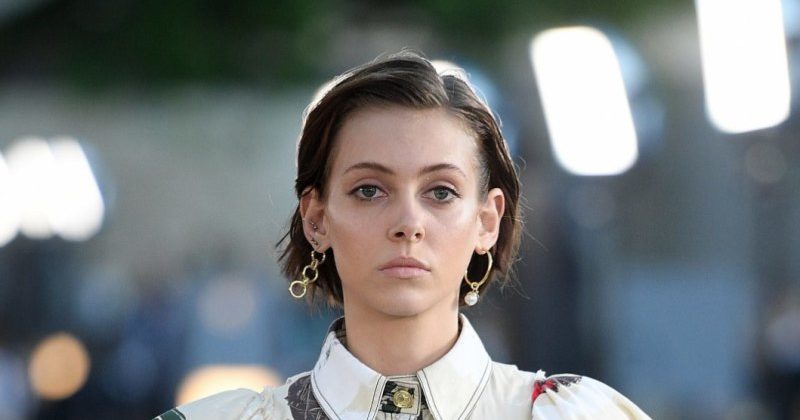 It seems fitting that in the same week a major retrospective of the work of iconic fashion designers Jenny Kee and Linda Jackson was announced for Sydney's Powerhouse Museum, Fashion Week has reminded us about what Australian style is.

Or at least, what it can, and perhaps should, be.

Some of the strongest shows at this year's Mercedes-Benz Fashion Week, which ended on Friday, embraced a thoughtful idea of Australian style, by considering the kinds of lives we lead and the clothes we need to live them. 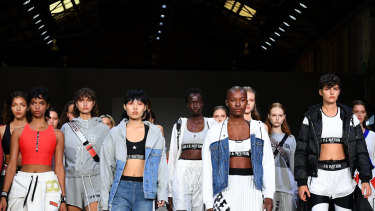 It was there in P.E. Nation's neon-pop and super-cool street and activewear, and in its collaboration with classic Australian cossie brand Speedo. And it was there in the chic rash vests at Bondi Born (practical and stylish). As Dale McCarthy, founder of Bondi Born puts it, "for a swimwear and resort wear brand, living in beachside Sydney is a daily inspiration."

It's always been there for Lee Mathews, who celebrates 20 years of her feminine, non-trend driven pieces in fabrics ideal for the Australian climate: organic cottons, silk and linen. Plus her printed dresses that are always so easy to wear. 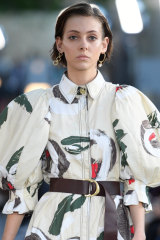 "I like the way Australia smells," Mathews tells me when I interview her in the week before her show. We were talking about travel, inspiration and stepping off that plane when arriving back home.

It feels a little similar to the way Kee describes being inspired by Australia. Before the announcement of Jenny Kee and Linda Jackson: Step Into Paradise, opening at the Powerhouse in October, Kee says of the time she spent with Jackson: "We walked through the bush, we swam in the ocean, we had this sort of magic creativity."

Kee ran the seminal boutique Flamingo Park (which stocked Jackson's work) in Sydney's Strand Arcade in the 1970s. "When we first opened Flamingo Park, it was such a time of change and creativeness … people had a sense of real national pride," she says.

In their four decades of creative partnership, the duo took inspiration from Australian animals and landscapes in previously unheard of ways. What could have been kitsch (koala-printed jumpers, for example) and cringeworthy, was actually about a genuine love and a transmission of a sense of place and time.

For Kee, the time spent working with Jackson was one of extreme "optimism". 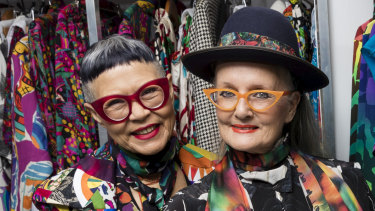 Fashion designers Jenny Kee and Linda Jackson at the Powerhouse Museum in Sydney to announce their new exhibition.Credit:Brook Mitchell

And this sense of optimism seems to be something essential to fashion again, despite, or perhaps because of, the political climate we're living in.

Well, that, along with wanting to create clothes that people can actually wear.

One example is Bassike, who returned to Fashion Week this year after a nine-year absence with a collection that experimented with colour and tie-dye prints. The use of colour is something that the minimalist brand has tended to shy away from. This year the brand wanted to explore, yes, a sense of optimism. 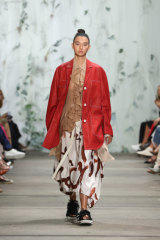 A look from the Lee Mathews show at Fashion Week. Credit:Lucas Dawson

The latest collection also exemplified what the brand has always been about: ease and versatility.

"I think wearability is key when designing for the Australian lifestyle," says Bassike creative director and co-founder Deborah Sams. "Clothes need to be timeless and easy to put together, for both the climate and our active lifestyles. I think our use of luxurious natural fibres very much plays into the Australian way of dressing."

This easy elegance was also visible in the "throw on something to go from beach to rose" vibe at Matteau, the "brilliant prints and don't take yourself too seriously" attitude at Double Rainbouu and the way Christopher Esber, in a very strong collection, thought about clothes women want to wear to the office before stripping off a layer (and some worries) to escape. The closing song for the collection? Holiday by Madonna. 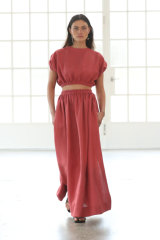 Phoebe Tonkin in a Matteau design on the runway during Fashion Week.

Perhaps the most potent example of this return to embracing Australia was from Aje, the label that opened Fashion Week last Sunday. The brand has previously worked with the family of the late Aboriginal artist Minnie Pwerle, using three paintings from her archives (the artist's family received royalties from sales of the pieces) and, last year, worked with prints by late artist Brett Whiteley, with permission from his widow Wendy Whiteley. Last year's show was held in Whiteley's heritage-listed Secret Garden on Sydney's harbour.

This year, the show was held under the shadow of the Sydney Harbour Bridge on a sparkling blue day. There were wattle and waratah prints, shirts with map of NSW patched onto them, and a colour palette of outback red and salt-lake pink. The voluminous puffed-sleeve silhouettes, as my colleague noted, seemed to reference classic Australian books and films including Playing Beattie Bow, Picnic at Hanging Rock and My Brilliant Career.

Aje creative director Edwina Forest believes that the longevity of the label, which this year celebrates its 10-year anniversary, is in part because inspiration for the clothes has always come from within Australia rather than outside it.

"It's in being proud to be an Australian brand and to look inward for inspiration without always looking outward as a lot of others do to try and be relevant," she said ahead of their show.

This embrace of Australiana is particularly interesting considering that travel and technology has made the world, and especially the fashion world, a smaller place (not to mention the proliferation of fashion watchdogs such as the influential social media account Diet Prada, which is quick to call out derivative, copycat and plain old ordinary fashion).

Exploring a sense of Australiana is about rediscovering a sense of confidence in local designs, rather than being insular or parochial. And along with that comes a certain, and necessary, optimism. It's escaping cultural cringe by being comfortable enough to look within ourselves for inspiration, creating pieces that feel right for the Australian climate and our way of life.