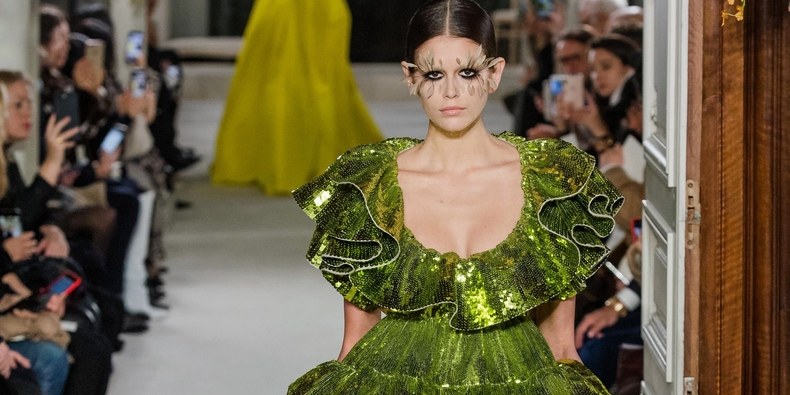 Couture is by no means a quiet affair. While there is something serene and elegant about taking in an intimate salon-style show, this couture season proved that bold color, big shoulders, and even bigger skirts are here to stay. With the Oscars right around the corner, many designers sent out glimmering gowns that we can expect to see on the likes of Lady Gaga, Emily Blunt, and newcomer Yalitza Aparicio. Some looks may indeed not make it to the red carpet—Chanel's final look, a silver swimsuit, for one—but it certainly was a social media sensation. And neither may John Galliano's thoughtful Artisanal collections looks; not for the faint of heart, these hand-crafted ensembles embody the true spirit of couture. Also embodying that spirit was Valentino's Pierpaolo Piccioli, whose romantic collection, shown on a diverse cast of models, was the winner of fashion week. Here are the 10 best couture looks from the Spring/Summer 2019 collections.

It may be safe to say that Valentino has "won" couture week. Not that it's a competition, but the thought, consideration, and gorgeous handiwork throughout this collection is undeniable. In less capable hands, this lime green gown could have gone down a much different path, but it was a favorite of Pierpaolo Piccioli's collection.

The final look of the Chanel couture shows is always the "Chanel Bride." In recent seasons, Karl Lagerfeld has stepped away from classic bridal looks, instead opting to create dramatic options for today's woman. In recent memory, the Chanel bride has worn pants, something blue, and, for this spring couture collection, she donned a couture swimsuit.

Clare Waight Keller has had quite a year, coming off dressing Meghan Markle for her wedding, and receiving the best womenswear designer of the year award at the British Fashion Awards in December. For her very elegant spring couture collection for Givenchy, and in this look in particular, she mixed strict tailoring with softness, or 'flou,' as the French call it.

Balmain has not held a place on the couture calendar in 16 years, so it was quite a to-do that designer Olivier Rousteing has put the house back on the schedule. The collection was very Balmain—i.e., big shoulders, big slits, and lots of glam.

The frothy confection that is a Giambattista Valli show never fails to bring smiles to showgoers' faces (and, indeed, sometimes tears). Just in time for Valentine's Day, Valli's taffeta and tulle rouge and pink gowns were exactly the fashion fantasy that we all crave from him.

Giorgio Armani's couture collection was inspired by the late, great Bernardo Bertolucci, but also could equally have been inspired by Armani's runway hits of yore. This beaded jumpsuit belongs on the Oscars red carpet; we can easily imagine Evan Rachel Wood—or another starlet not afraid of wearing pants—rocking this look in a few weeks' time.

Alexandre Vauthier's party-ready couture show featured short hemlines and lots of volume. Not to be missed was the designer's next iteration of his futuristic collaboration with Alain Mikli sunglasses.

Maria Grazia Chiuri's cerebral take on the circus may not have been an obvious starting place for a couture collection. While tent-like dresses and spotted cocktail dresses opened the show, paired back suiting numbers felt like a modern take on couture, fit for the younger generation who wore her "We Should All Be Feminists" tee.

Rest assured that there are a handful of celebrity stylists trying to get their hands on this fuchsia pink tiered tulle dress for the Oscars. Alberta Ferretti's entire collection, from the gowns to the sparkling suits, offered up many options for the red carpet madness to come.

For his Margiela Artisinal collection, John Galliano is often inspired by the new, now, and technology, as much as he is by his own past or history. The opening gender-fluid looks of the couture collection featured Yves Klein blue dogs, flounces of feathers, and hyper-hued frocks against a graffitied background. It was too much stimulation for the eye, in the best of ways.