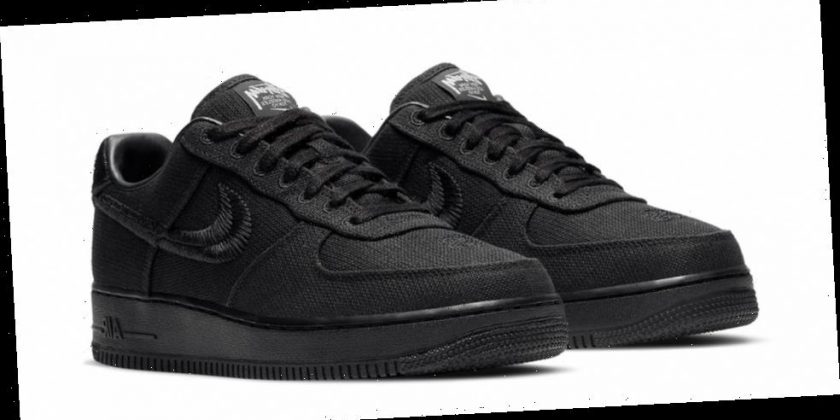 It’s been four decades years since Stüssy was founded in 1980, and the California-based company has been successful as ever in 2020, putting forth strong seasonal collections, limited collaborations and compelling co-crafted footwear. The final category has proffered hits like the Stüssy x Nike Air Zoom Spiridon Cage 2 and Stüssy x Birkenstock Boston, and now Stüssy is set to cap the year off by linking with Nike one final time for two co-created Air Force 1s in “Fossil Stone” and “Black,” the latter of which just received official images.

Upon a brief glance, Stüssy’s latest may appear to be a simple black Air Force 1 Low, but it differs from in-line Nike Sportswear styles in both material and embellishment. Uppers are constructed entirely of a hemp-like textile material, with Swooshes made entirely of thickly-embroidered thread. Heels add further to the mix of textures with a longhaired textile of their own, and also boast a silver-trimmed Stüssy medallion.

More special ornamentation graces the tongue tag and toebox: the former puts forth Shawn Stussy‘s recognizable signature above International Stussy Tribe callouts to New York, Los Angeles and Tokyo, while the latter is embellished with Stüssy’s Chanel-inspired double S logo. Collar lining is done up in premium leather for a luxurious feel, and all black midsoles/outsoles complete the look.

The Stüssy x Nike Air Force 1 in black will reportedly release on December 13 and retail for $130 USD, though this has yet to be confirmed by Stüssy or the Swoosh. Unlike its “Fossil Stone” counterpart, which is a Stüssy exclusive, the black pair will be available through Nike SNKRS.