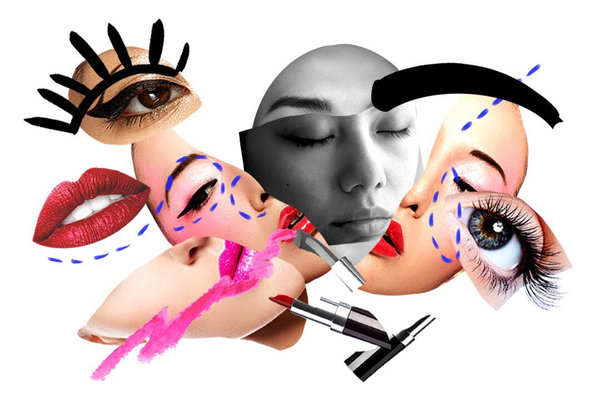 — A makeup advertisement in the Seoul subway

But this wasn’t art: This was protest, one in which South Korean women, emboldened by #MeToo, were protesting what they see as the restrictive beauty standards of their country’s deeply patriarchal culture. South Korea has the world’s highest rate of cosmetic surgery per capita, and the beauty market there generated $13 billion in sales last year.

“We go through 12 steps just to put on the basic products before we even apply makeup,” said Kim Ji-yeon, 22. “That basically defines the problem.”

[Sign up here to get future installments of the Gender Letter delivered to your inbox!]

My colleague recently delved into the movement that’s become known as “Escape the Corset.” It is set against a backdrop of political and economic disparities. Of 34 countries in the Organization for Economic Cooperation and Development, South Korea’s wage gap is the widest. And women hold just 10 percent of corporate management positions.

So what are women who are escaping the corset doing, exactly? Aside from trashing makeup, which is saving them hundreds of dollars a month, they are embracing bowl haircuts and opting for eyeglasses instead of contacts — a seemingly simple protest that, nonetheless, has made the women targets of verbal abuse and death threats online.

Closer to home, a different effort is underway to draw attention to unrealistic body expectations propagated by the stars who dominate social media.

Jameela Jamil, an actor on “Good Place,” is on a quest to upend Instagram’s #sponcon machine — #sponcon is short for “sponsored content,” or posts that celebrities are paid to promote — that pays untold sums to those who peddle weight loss teas and shakes, particularly celebrities (see: Khloe Kardashian).

“When will these women who are covered in plastic surgery stop telling their followers to drink a laxative to look like them?” Ms. Jamil wrote on Instagram this week.

Ms. Jamil, who started the #iweigh movement on Instagram — which aims to illustrate that a person’s worth should be measured in accomplishments, not in pounds — said she cares so much partly because she still grapples with health problems from similar products she used to buy and ingest.

“I was the teenager who starved herself for years, who spent all her money on these miracle cures and laxatives and tips from celebrities on how to maintain a weight that was lower than what my body wanted it to be,” she tweeted. “I was sick.”

On Tuesday, Ms. Jamil mocked these celebrities in a video that’s been viewed three million times between Twitter and Instagram. In it, she’s sitting on the toilet, sobbing through smeared makeup while sipping a shake.

Readers: Which beauty item would you be happy to never see again? Let me know at [email protected].

That’s the net worth of Denise Coates, the richest woman you’ve probably never heard of. Ms. Coates, the British founder and chief executive officer of the online gambling company Bet365, is more than 10 times richer than Queen Elizabeth II, according to Bloomberg. She just joined the ranks of the world’s 500 richest people for the first time. She’s the only woman among the 17 billionaires in Britain.

More from The Times

“If Bobbie talks, I’m finished.” A trove of text messages details a plan by the former CBS mogul Les Moonves to silence an accuser. [The New York Times]

What is it about the word “wife”? “I don’t want to be introduced at all, as anything other than my name, I thought, but I did not say this out loud,” writes Marcia Walker, for our Rites of Passage essay series. [The New York Times]

A global epidemic of “femicide.” More than half of all female homicide victims last year were killed by intimate partners or relatives. [The New York Times]

“We are willing to die here.” As war takes a toll on millions of women and girls in Yemen, gender-equality activists are pushing to be included in future peace negotiations. [The New York Times]

“Help Wanted — Female.” It has been 50 years since The New York Times classified job ads went unisex. So where are all the female C.E.O.s? [New York Times Opinion]

From the archives: Remembering Harvey Milk

Forty years ago this week, in 1978, Harvey Milk, a gay rights leader and the first openly gay elected official of a major American city, San Francisco, was assassinated in his City Hall office. Just moments earlier, San Francisco’s mayor, George Moscone, was shot to death in the same building.

Milk served only 11 months, but his political legacy endures: Some recently noted that it paved the way for what Americans witnessed earlier this month, when more than 150 L.G.B.T.Q. candidates won seats in the midterm elections.

In 2016, the Navy announced it would name a ship for him. Milk had served from 1951 to 1955, when he was discharged for being gay. And in 2009, Milk was awarded a posthumous Presidential Medal of Freedom.

A year before his death, Milk recorded a message for his supporters. He’d asked a friend to release it if he were assassinated.

“I cannot prevent anybody from getting angry or mad or frustrated,” he said in the message. “I can only hope they'll turn that anger and frustration and madness into something positive, so that hundreds will step forward, so that gay doctors come out, the gay lawyers, gay judges, gay bankers, gay architects.”

Gender Letter helps you keep up with the world, and the women shaping it. Tell me what you think at [email protected].

Sign up here to get future installments delivered to your inbox.