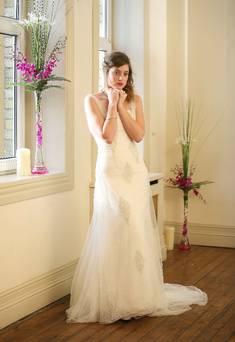 September is the start of a new season and for some fashionistas that involves buying a whole new wardrobe. But this month Oxfam are asking people to put a halt to their clothes shopping for 30 days and think about buying something second-hand instead.

The Second Hand September initiative encourages shoppers to rummage through the rails of charity shops. Brides-to-be, meanwhile, are encouraged to check out the Oxfam bridal boutiques, which have become increasingly popular shopping destinations for eco-conscious brides.

“Approximately 90pc of the dresses in our Oxfam bridal shops are brand-new, generously gifted to us by designers and bridal boutiques,” says Alice Dawson-Lyons of the charity. “We have everything from vintage to the occasional Vera Wang and we stock all styles and all sizes — at any given time there are about 200-250 dresses on display.”

For many women finding the perfect wedding dress is the most important sartorial challenge they will ever undertake. But an increasing number of women are shunning expensive creations in favour of previously owned or even vintage varieties.

Michelle Carmody is getting married next summer and while she hasn’t ruled out the idea of a homemade dress, she says she is seriously considering buying a second-hand one. “There is so much waste in the world and I had already decided that we weren’t going to have a huge grand wedding and spend thousands of euro on an elaborate show,” she says. “So we are going for something small in our garden (weather permitting) with lots of home-cooked food, music and fun with friends.

“My cousin was going to make a dress for me, which would be lovely but she has to buy the fabric so I am thinking now that I will go for something second-hand — most of the time the dresses have only been worn for one day so it seems a bit ridiculous to throw it out or keep it in an attic forever instead of giving it at least one more airing.”

Margaret McNamara can relate to this as she will be walking down the aisle next month in a previously owned dress. She knew she wanted “something different” but didn’t want to spend a huge amount of money on an outfit she would only wear once.

“I always liked the idea of a vintage outfit as I could never see myself in the classic white dress,” says the Clare woman. “I did quite a bit of research online and found a shop in Dublin called Dirty Fabulous which had a great range of dresses so myself and my two sisters and a couple of friends headed up for the day so I could check them out.

“The fourth dress I tried on, I knew it was the one for me — it is a lace 1940s prom dress in aquamarine with a fitted bodice and a full skirt — I loved it straight away.”

Margaret, who’s marrying John Moloney, says although price is an issue, there’s something nice about having a dress with a history. “Of course, it’s great that you generally pay less for a vintage dress than one which was made especially for you or new off the rack, but I really like the idea of wearing something which has been loved by someone else before me.”

Kathleen Cummins of sellmyweddingdress.ie says there has been a definite surge of interest in second-hand dresses which shows no sign of abating. “I started the business 10 years ago (when trying to sell my own dress) and as we had just entered into a recession there was a big market for wedding dresses due to their high value,” she says. “And of course there was the equally big market for women looking to spend less on their wedding dresses.

“I had expected business to slow down once we came out of recession but this wasn’t the case and it has grown steadily. I am finding that while people have more money to spend on their dress they are being very savvy and have continued to look for value and the second-hand option is regularly considered alongside the conventional bridal shop. In fact, some women are very proud of the fact that they saved on-average 50pc of the retail price, and putting the money into the honeymoon or house deposit is much more desirable.”

Kathleen, who sells a range of dresses from size 8 to 16, says the majority of her stock consists of pre-worn dresses but she also carries a large range of ex-sample dresses and a small selection of new items.

All of the ‘once-loved dresses’ are less than three years old (most just 12 months old) and prices start at €500, reflecting a 50-70pc saving on the recommended retail price. All dresses have been professionally dry cleaned, are in pristine condition and ready to be worn.

But she says that as well as making a saving, the other plus to buying a second-hand dress is the speed in which the bride receives it.

“Savings can be really significant, but the other huge benefit is that the dress is available immediately, no six-to-eight month wait while it is being made,” she says. “Buyers also get to try on their dresses in the actual size and get a good indication of how it will look for their big day.”

Anne O’Gorman says being able to try on a dress which actually fits made such a difference to her when she was choosing what to wear for her wedding two years ago.

“When I was getting married I did the usual thing of going around the bridal shops in an attempt to find something I really liked,” she says. “I was 40 at the time so didn’t want to look like mutton dressed as lamb and as I already had two children, I wasn’t as slim as I would have liked to be but all of the dresses I tried on were a sample size 8 and as I am a size 14, I was having to squeeze into something and try to imagine what I would look like if it fitted properly.

“Also, there is a huge amount of pressure to buy the dress straight away as the assistants were telling me that there was only one left in the style I wanted or that I would have to put an order in that day so it could be made in time. So I actually put a deposit on two dresses in two different shops, even though I wasn’t entirely happy with either of them.”

But the mother-of-three, who lives with her husband Flor in Cork, continued to look at other dresses and stumbled upon a photo online of the ‘perfect dress’ so did some research until she found it.

“I went on a Facebook page called Help I’m Getting Married and I saw some pictures a lady put up of her wedding,” says Anne who works as a recruitment consultant. “Her dress was beautiful; champagne-coloured, floaty sleeves and beaded but not sparkly.

“It was exactly what I was looking for so I contacted her and found that it was for sale in a shop in Kilkenny but it wasn’t my size.

“But then I discovered that the same one was in the second-hand shop in Galway so I high-tailed it up there and as soon as I saw it I knew that it was the right dress for me. It fitted me perfectly and there wasn’t a single mark on it, it looked just like new.

“It was so great to be able to try it on and buy it there and then and the price was fantastic, costing a third of what it would have cost me to buy it new, so I was totally thrilled.”

Anne had no interest in knowing the story behind her dress as she felt it was irrelevant to her own wedding day — and dress specialist Kathleen Cummins says most brides feel the same way.

“People rarely ask about the history or previous owner of a dress,” she says. “They view it in the same way as they would in a conventional bridal shop.

“Finding the dress of their dreams and within their budget is their main focus.”