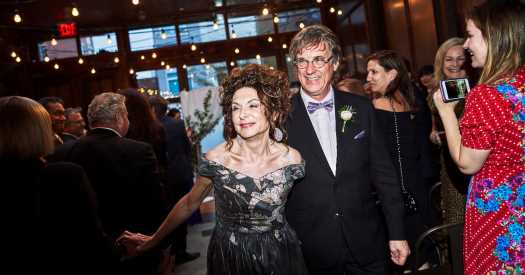 When it came to dating, Tanya Pushkine and Paul Luykx each had a strategy.

For Ms. Pushkine, a philanthropy consultant, it was dating sites. She joined 11 of them. “Whatever I found out about, I’d put myself on,” she said. “I didn’t take them all seriously.”

She was highly selective, though, about who she would meet. “I had been stalked before and came across some scammers,” she said. “I had a lot of disappointments but wouldn’t give up. I knew I wanted to get married again. It became a calling to find someone.”

Mr. Luykx, a real estate investor, joined just four dating sites, but his goal was to make many connections. So, he created a spreadsheet to keep track of them all. “I didn’t want to make mistakes and say to someone, ‘How’s your brother?’ and have them say, ‘What brother?’” he said.

His one-year goal: to “meet five new women every week, which meant I needed to email 20 and speak to 10 and dwindle it down to five.”

Ms. Pushkine, 60, and Mr. Luykx, 63, met through Bumble in July 2016. (He had previously rejected her on Match.) When she received Mr. Luykx’s “Where have you been all my life?’’ reply to her Bumble hello, she was charmed. “It was different than the rest,” Ms. Pushkine said. 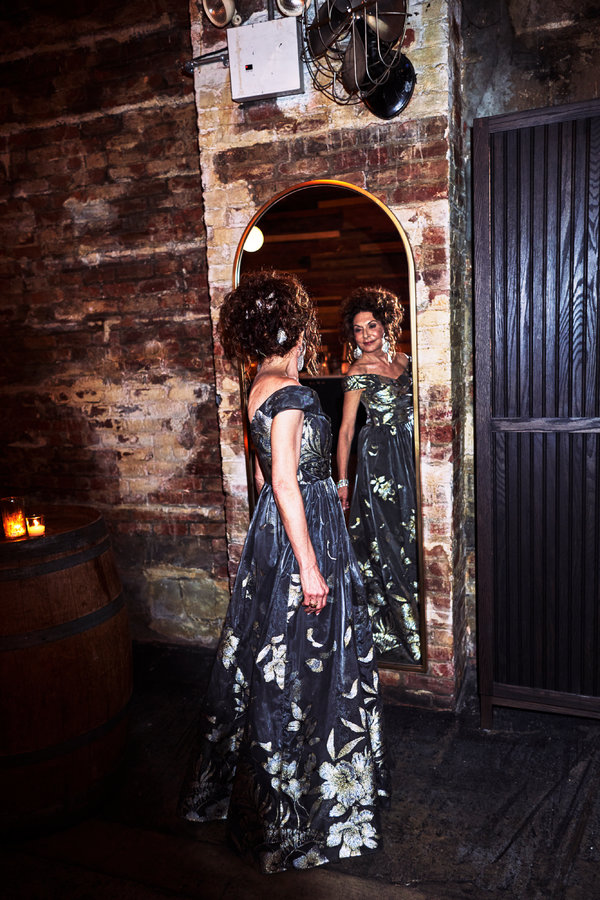 Both had similar backgrounds. They had been married before — Ms. Pushkine once, and Mr. Luykx twice — and each have two children from previous relationships.

Ms. Pushkine was married for 14 years to a restaurant manager whom she had known for six months before separating in 2003. Her divorce was finalized five years later.

Mr. Luykx was 20 when he married his high school sweetheart. “We were good friends, but we hadn’t grown up yet,” he said. The marriage lasted 19 years. “I was married to my second wife for 14 years,” he added. They divorced in 2016.

Like Ms. Pushkine, Mr. Luykx craved being in a relationship. “At 60, I never expected to be in this situation again,” he said.

Along with a dating spreadsheet, Mr. Luykx had developed a routine. The line he used with Ms. Pushkine was standard. He met first dates at Center Bar in the Time Warner Center in Manhattan for drinks, which were sipped at the same reserved table. On his way to the bar, he would stop and buy a small box of gummy candy from Sugarfina on the first floor of the building.

“This might sound like a high-volume set up, but it wasn’t that way at all,” Mr. Luykx said. “I was so impressed with the women I met. I felt privileged to meet them.”

On July 17, however, Mr. Luykx was running 20 minutes late to meet Ms. Pushkine, and so he arrived with apologies rather than candy.

“He walked in wearing bright reddish pants and Converse sneakers, which I loved,” said Ms. Pushkine, who described herself as Bohemian and eclectic with an edge. “We share a cultural bond. He’s from Amsterdam, I’m from Brussels. A few minutes after meeting him I knew he was different. Usually I have one of my kids do a rescue call, but I didn’t need it. I remember thinking, ‘I don’t want to be anywhere else but here.’”

Mr. Luykx felt the same way. “We are both European; we are both French speakers. We had so many things in common,” he said. “She was beautiful. She showed up in silky pajama bottoms. We couldn’t stop talking.”

Four hours passed quickly. Then they took a walk in Central Park. More talking, and some kissing, followed. Before they knew it, three hours had slid by. Neither wanted to leave, but Mr. Luykx got into an Uber and went to his home in Jersey City. Ms. Pushkine, who lived nearby, walked to hers.

“In the car I was thinking, ‘Oh my God, this is the girl. I’m done. Resistance is futile,’” he said.

Texts, calls, emojis of blowing kisses, and an additional date followed. Then it was a weekend stay at his apartment where the spreadsheet was revealed.

“I thought it was a joke until I asked to see it,” said Ms. Pushkine, who saw she was rated No. 1 out of 80-plus women. Under the notes section, he wrote, ‘She floats my boat more than anyone.’ Then I was really curious about these other women.”

Mr. Luykx announced that weekend that the spreadsheet would be retired, and any future dates canceled. “When I met her the whole spreadsheet was instantly irrelevant,” he said.

Their relationship moved quickly. Soon after that weekend they closed their dating accounts. A few months later, Ms. Pushkine packed up 30 years of belongings, rented a storage unit, and moved into his home for the next seven months while she gutted her Upper West Side apartment in preparation for both to move there permanently. This happened in October 2017.

“I wanted the apartment to be ours,” she said. “In the past, boyfriends moved in with me and the apartment was my personality. I didn’t want it to be that way. I wanted it to be ours. We sold all of our furniture and started from scratch.”

In May 2018, Mr. Luykx took Ms. Pushkine out to dinner, but on route, steered her to a park bench near the Museum of Natural History, got down on one knee and pulled out a box.

“Inside was this big, gaudy diamond ring that looked real, but I knew was fake,” she said. “He has a wonderful sense of humor. He’s very efficient, but he’s jewelry incompetent.”

Ms. Pushkine said yes immediately. Over the next six months Mr. Luykx proposed again. And again. Fourteen times in total. Each proposal was spontaneous — in the kitchen, during dinner with friends, in front of their building — and each came with another engagement ring.

“One time, he did it in a restaurant and the chef sent over Champagne,” she said, adding that one ring was uglier than the next. “Each was a dollar from a site called Wish.”

During this time, Ms. Pushkine was designing her own ring. “It was taking months to complete,” Mr. Luykx said, “so while we waited I kept these Cracker Jack rings coming. Eventually I took over the production of the real ring once all the pieces had come together.”

That Thanksgiving was spent in Paris. After landing there, Mr. Luykx insisted he, Ms. Pushkine and her daughter take a walk. By the Palais-Royal he stopped in front of a fountain; Ms. Pushkine’s designed ring was in his pocket.

“She’s a romantic,” he said. “We both cried when she said yes. It’s a celebration of life and family.”

This was indeed true on April 12, when 110 guests arrived at the Brooklyn Winery in Williamsburg for the couple’s wedding ceremony and reception.

Ms. Pushkine was escorted to a huppah by her son, Luca Rojas. Her daughter, Lara Rojas became a Universal Life minister for the ceremony, which incorporated Jewish traditions.

“Tonight is about two people working hard and developing a relationship that is so strong because they’re so committed,” Ms. Rojas said. “I’ve seen my mom go through several men over 16 years and knew that Paul was her match. They both have a goofiness where they can be themselves. I’ve watched them form a deep, kind, loving relationship.”

Mr. Rojas, who flew in for the wedding from Los Angeles, echoed those sentiments: “I have tremendous happiness for her. I was front row for the divorce and saw the hardships of dating. I’ve learned to cherish the people who bring her happiness and Paul does that. He has a great spirit and personality.”

During their vows, Mr. Luykx promised to always ask her: What will make you happy? Ms. Pushkine promised to be the most dependable person in his life and to love him no matter what.

The couple exchanged rings under the huppah, then stepped on a glass to end the ceremony and signify their unity.

At 10 p.m., guests moved into the bar area for the newlyweds’ first dance. Mr. Luykx was surprised when his daughter, Sandra-Mae Luykx, a jazz singer and musician living in London, serenaded the pair with “At Last,” made popular by Etta James, a favorite of the bride. (His son was unable to attend.)

The song’s sentiments were not lost on anyone. It was very clear this couple had found each other, and love, at last. “She’s the most precious thing that has ever happened to me in my life,” said the groom. “The way we love each other is deeper than anything I’ve experienced.”

The bride spoke similarly. “I wanted someone faithful, loyal, honest, and kind — all things that Paul is,” Ms. Pushkine said. “He has the most generous heart of anyone. It took me a really long time to find my other half. But I did.”

Where The Brooklyn Winery, Williamsburg

50 Dresses Her dress, an off-the-shoulder, metallic-embellished gown, was from Marchesa. “I didn’t want to wear a traditional dress so I ordered this online,” the bride said. “I ordered 50. It was a revolving door of UPS. This was the first one I tried on.”

Speeches One was made by Paula Andrews, Ms. Pushkine’s friend from the Juilliard School, who likened their marriage to a cherished vintage of wine. Mr. Luykx’s aunt, Marianne Anderson, surprised the groom by playing a recording of the speech he made at her wedding in 1965, when Mr. Luykx was 9. Then she showed the photos.

The Rings The ring was made by the bride’s former jewelry teacher, Jenny Lessard, and included three cognac diamonds Ms. Pushkine sourced from a jeweler on West 47th Street. “Because her ring was taking so long, I just kept proposing with fake ones, which she found thrilling,” the groom said. “I’d given her so many I bought her a jewelry box to keep them in.”

Reader Callout: What is your favorite wedding gift?