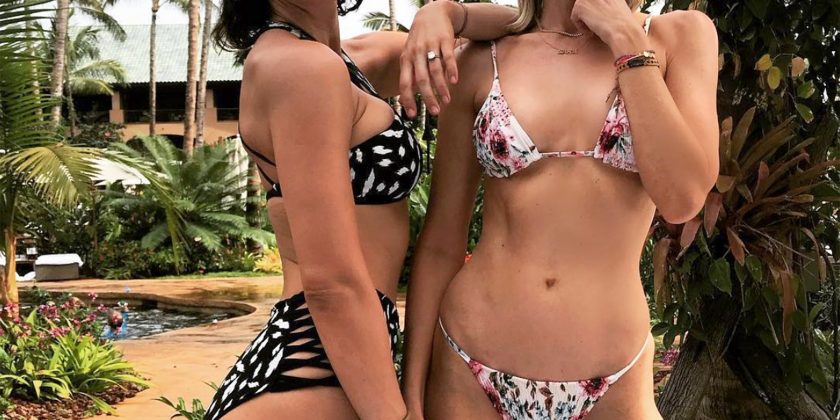 The 34-year-old singer has been engaged to record producer and composer David Foster, 69, since the summer, and two of his daughters, Erin Foster, 36, and Sara Foster, 37, have been known to tease their future stepmother.

In the latest update in the Instagram saga, on Sunday, Sara posted a picture of herself and McPhee posing in bikinis at the Four Seasons Resorts Lanai in Hawaii.

“When your mom refuses to dress age appropriately,” the 90210 alum jokingly captioned the photo.

In response, the American Idol breakout star quipped, “I can’t even think of a good response.” This prompted Sara to reply, “As long as you keep looking this good in a bikini, I will be writing captions like these.”

Some other celebrities outside the family also acknowledged the hilarity, including Jenna Dewan, who wrote, “Dying,” alongside the crying-laughing emoji. Lil Rel Howery of Get Out fame added, “I’m in Maui and your mom looks great,” including the thumbs-up emoji.

This past week, Erin got in on the action by calling McPhee “grandma” in the caption of another Instagram taken in Hawaii — a stunning shot of the musician wearing a vibrant yellow bikini.

“Grandma!!!! Wtf I don’t want to be next to you at the pool,” the Barely Famous star said in a message first spotted by Comments By Celebs.

McPhee then poked fun at herself by replying, “@erinfoster Grandma carries it in the back. Don’t worry- you’ll see my cellulite when I stand up.”

Since her father and McPhee went public with their relationship, Erin hasn’t been afraid to tease her dad about their coupling.

The comedy writer left a comment on her dad’s Instagram post from his vacation with McPhee to Italy in July, calling his fiancée, “Mommmyyy,” alongside a sea of heart emojis. Sara also commented, “Out of the country. What did I miss?”

During a Halloween bash, Erin shared a photo in which she posed with the Scorpion actress and her mom Rebecca Dyer — who was married to David from 1982 to 1986.

RELATED VIDEO: Katharine McPhee and David Foster Open Up About Their Love: ‘It Doesn’t Make Sense to A Lot of People But It Does to Us’

The couple opened up to PEOPLE about their journey to love in September. “We genuinely love and respect each other and have for a very long time,” McPhee said.

“She didn’t catch my eye on the first day because I was so busy trying to do my job,” added David. “But the reality is that in the last 12 years I’ve always had a connection with her.”