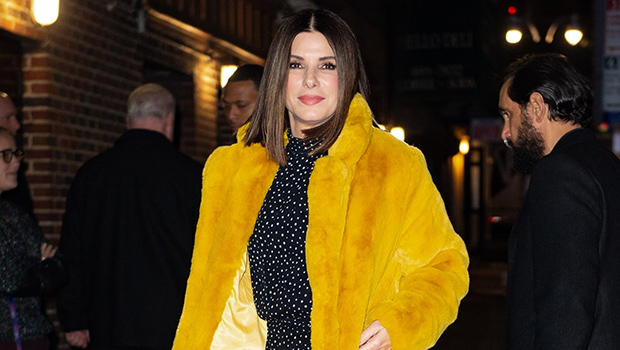 Sandra Bullock dressed to impress while heading to tape ‘The Late Show’ in NYC in Dec. 17. The ageless wonder rocked a polka dot high slit dress with sexy black knee high boots. We’ve got the pics.

It’s not very often that stars look even hotter arriving to tape a late night show as they do when they actually appear on TV. But Sandra Bullock, 54, showed up to tape The Late Show with Stephen Colbert on Dec. 17 looking super sexy and incredibly youthful. She rocked a high neck black dress with tiny white polka dots and the skirt featured a massive thigh-high split. It showed off just a hint of her killer legs under sheer black nylons, as her footwear was so on point! Sandra donned sexy boots with a stiletto heel and the leather went all the way up over her knees. Seriously, those boots are on our Christmas wish lists now.

Sandra gave the outfit a pop of color with a mustard yellow faux-fur jacket and bright makeup featuring pink cheeks and a red lip. She wore her hair in a sleek shoulder-length straight bob and had a bright smile for the paparazzi who were waiting outside the Ed Sullivan Theater in NYC. You’d never know looking at her that she’s 54-years-old, as her face looked completely wrinkle free. Wherever the fountain of youth she’s been drinking from is, we want to know its location.

Sandra’s outfit for the show was also gorgeous, but didn’t have as much “wow” factor as her arrival look. She wore a sleeveless  bright red top with a long tunic sheath on her left side that went down to her knees. The Bird Box actress paired it with sleek black trousers and heels, with a gold chain around her neck. Classy and elegant, but nothing like the high slit dress and to-die-for leather boots she wore to attend the taping.

Even though Stephen hosted Comedy Central’s The Colbert Report for 11 years and has been host of CBS’ The Late Show since Sept. of 2015, this was the first time he and Sandra had ever sat down to chat. He recalled how he introduced himself to her years ago when she was a guest on The Daily Show and he was one of Jon Stewart’s correspondents. Stephen recalled how he came back to the set to just meet her because he was such a fan, to which Sandra hilariously let him down by telling him she had no recollection of the encounter. Womp womp.