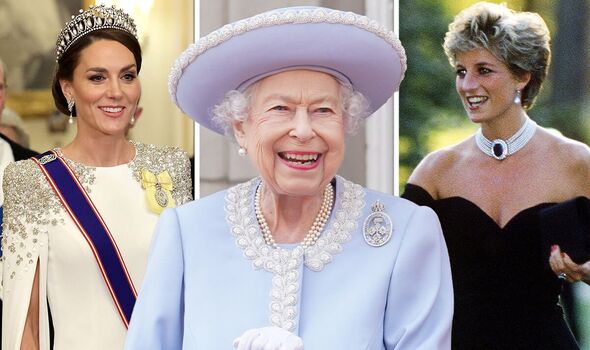 Throughout her lifetime, the late Queen was rarely pictured without a pair of pearl earrings or a string of pearls around her neck. Pearls have been worn by members of the Royal Family over the course of history, and the lustrous gems were famed for their rarity.

Natural pearls are famously difficult to come by, making pearl jewellery all the more special.

Charlotte Grierson of Charlotte Reedtz Jewellery said: “Pearls come with many qualities and colours which are dependent on the mollusc the pearls grows in.

“Pearls have a very long history and are closely connected with water and the circle of life – so promoting the flow of wisdom and balance.

“The natural pearl was very rare and extremely expensive, so also a symbol of wealth.”

The Royal Family are known to wear pearls when out and about on royal duties, but they also make special appearances at royal weddings and funerals.

Charlotte added: “The royals often wear white pearls which symbolise innocence and purity traditionally and are often given or worn at weddings.

“However, they also offer protection and security and have powerful calming effects.

“Pearls have often been worn as a symbol of grief by the royals (dates back to Queen Victoria), but they are also a symbol of new beginnings with the round or near round shapes.”

The late Queen was perhaps the Royal Family’s most famous pearl lover, and some of her pearls were originally a treasured gift from her late father while others were royal heirlooms.

For her wedding in 1947, then Princess Elizabeth wore the Queen Caroline and Queen Anne pearl necklaces for her trip down the aisle.

The late Princess Diana also wore pearls frequently, with many of her jewels now worn by the current Princess of Wales.

Kate tends to wear the Collingwood pearl earrings which Diana received as a wedding gift in 1981.

All of the royal women wore pearls in tribute to the monarch at her funeral in September.

Kate, Princess of Wales wore the Bahraini pearl earrings from the Queen’s collection.

Meghan, Duchess of Sussex wore a pair of dainty pearl and diamond earrings which had been gifted to her by the Queen to mark their first joint engagement in 2018.

Rachel Garrahan, British Vogue’s jewellery and watch director, said: “Breaking with royal mourning tradition of wearing only diamonds and pearls, she made a very personal tribute to the Queen.

“The Hesse Diamond Jubilee Brooch was unseen for more than a century when Camilla started wearing it and is believed to have been passed down from the Queen Mother, whose jewellery she wears regularly.

“It is one of Camilla’s oldest pieces and its royal story links to her past and the monarchy’s future.”