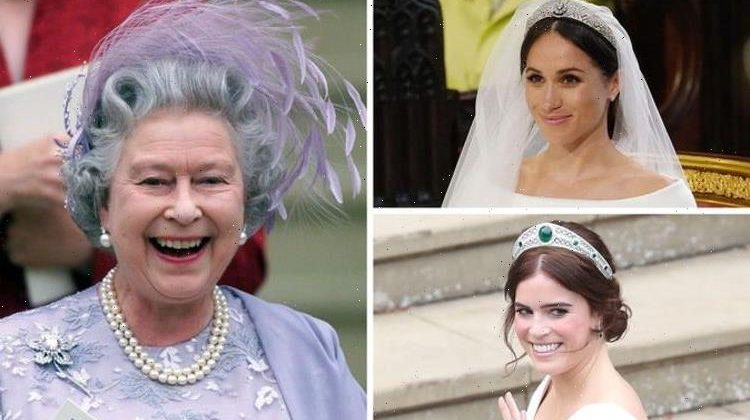 The royal jewellery collection is home to hoards of expensive necklaces, earrings and diadems. But some pieces are valued to be more pricey than others. Daena Borrowman, Marketing Manager at jewellerybox, outlined to Express.co.uk some of the most expensive jewellery in the Queen’s collection today, and how much these staggering pieces would cost to buy if ever put on sale.

Queen Mary’s Diamond Bandeau Tiara was worn by Meghan Markle when she married the Queen’s grandson, Prince Harry, in 2018.

The dazzling design is famous for its Art Deco style and is worth some £2million.

“The tiara is crested by an eye-catching, detachable, ten diamond-studded flower-shaped brooch from 1893, given to the then-Princess Mary at the time of her wedding to Prince George [future King George V].

“The actual tiara itself was created in 1932 with the express purpose of accommodating the special brooch.

“It had its most iconic moment in 2018 when Meghan, the Duchess of Sussex wore it on her wedding day.

“Its current value is £2million and the average Brit might only be able to afford it after 60 years of hard work.”

The Queen Mary Fringe Tiara is perhaps most famous for being the Queen’s wedding tiara when she married Prince Philip in 1947.

“It is made up of diamonds set in gold and silver which have been fashioned into 47 graduated rose-set tapering bars, separated by 46 narrow spikes.

“The tiara has a mechanism that allows it to be dismantled from its frame and worn as a necklace.”

Like many items in the royal jewellery collection, the Queen Mary Fringe Tiara is steeped in royal history.

Ms Borrowman added: “The diamonds used in this historical tiara were originally part of a necklace that Queen Victoria gifted to Queen Mary on the occasion of her wedding.

“The Queen Mary Fringe Tiara had its most dazzling moment when the current Queen, then-Princess Elizabeth, wore it on her wedding day.

“In fact, it caused major panic for the bride-to-be on her big day when it snapped as she was getting ready and had to be rushed to Garrard’s to be fixed.

DON’T MISS:
Prince Charles to visit Barbados as ‘guest of honour’ [INSIGHT]
Where is Sandringham? Beautiful setting of Queen’s Christmas retreat [PICTURES]
The Queen is given doctors’ green light ahead of Sandringham trip [ANALYSIS]

Princess Eugenie dazzled as a royal bride in 2018 when she wore the Queen’s Greville Emerald Kokoshnik Tiara.

The design is one of the most expensive tiaras in the Queen’s collection, valued at a staggering £10million.

“The Parisian jewellery house, Boucheron, made it to match the ‘kokoshnik’ style of the 19th Century Russian Imperial Court.

“The unique rose-cut pave diamond and emerald tiara is set in platinum, adorned by six small emeralds and one large central cabochon emerald of around 93.7 carats.

“It is the 4th most expensive royal jewel in the world, currently valued at £10million and the average Brit would have to work for 300 years to be able to afford it.”

The Queen’s Williamson Diamond Brooch is thought to feature one of the rarest pink diamonds in the world.

Ms Borrowman said: “The Williamson Diamond Brooch, worth a huge £25million, is the third most expensive royal jewel in the world.

“The exquisite pink diamond sitting at the centre of this jewel was presented to Queen Elizabeth II at her wedding by the Canadian geologist, Dr John Thorburn Williamson, whose mine it was discovered in.

“Cartier had the job of designing a jewel to give the pink gem the spotlight it commanded and conceived a diamond flower-shaped brooch, nearly four inches tall.

“The quintuple petalled flower sits at the end of a stem with two leaves on either side and the entire jewel is bedecked in more than 200 diamonds.

“The Queen has delighted in wearing the brooch at the Silver Jubilee of her reign, at the weddings of her firstborn and her youngest and on numerous diplomatic occasions.

“It’s been suggested that it may have been the inspiration for the Pink Panther diamond in the Pink Panther movie and could cost the average Briton more than 700 years of work to be able to afford it.”

The most expensive piece of jewellery in the Queen’s collection is thought to be the Nizam of Hyderabad Necklace, which was gifted to then-Princess Elizabeth in 1947.

Ms Borrowman told Express.co.uk: “The magnificent Nizam of Hyderabad Necklace, considered to be the most expensive piece of royal jewellery in the world, is worth more than £66million.

“It was a wedding gift to Princess Elizabeth from the Nizam of Hyderabad, one of the richest people in the world.

“The Nizam is said to have generously instructed Cartier to let the bride-to-be to pick anything she wished from their collections, to which the young princess chose a tiara with three detachable flower brooches and what we now know as the Nizam of Hyderabad Necklace Necklace.

“Featuring more than 50 diamonds set in platinum, the Queen has worn this extravagant necklace in numerous portraits before her coronation and has even lent it to the Duchess of Cambridge on numerous occasions in recent times.