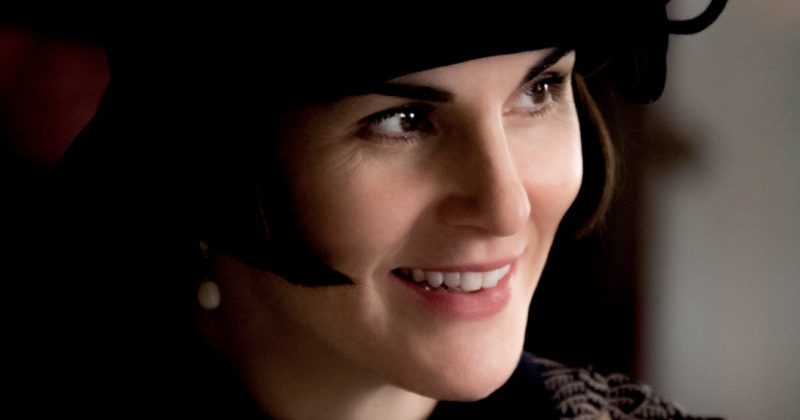 What does one wear when the Queen is coming to tea? It's the sartorial plotline of the new Downton Abbey film set in the mid-Twenties, the height of flapper style and, for costume designer Anna Robbins, it meant license to go all out.

"The production value on Downton has always been high, but for the cinematic experience I knew I needed to raise the bar," Robbins says of the challenge to make the wardrobes of every character, from Mr Carson to Lady Mary, sing on a 4.5-metre-high screen. Not a single "extra", be they a footman, maid or barrow boy, would pass on to the set without her sign-off. 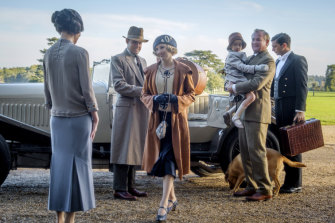 A scene from the new Downton Abbey movie.Credit:Universal Pictures

"It was lovely going into the film having worked on the series before, because I am now well-versed in these characters," she says.

In the film, we rejoin the Crawley family in 1927, the zenith of a style decade in which splendour loomed large and skirts grew shorter. For the royal visit of Queen Mary, Robbins needed to up the etiquette: leading Ladies Violet (Dame Maggie Smith), Mary (Michelle Dockery), Edith (Laura Carmichael) and Cora (Elizabeth McGovern) would need lower hemlines and to up the "dazzle" factor to impress their guest.

"I know people love the glamour of these characters and the costumes," Robbins says. "I needed to make it feel like they have moved on a bit, without straying too far from their established iconic looks." 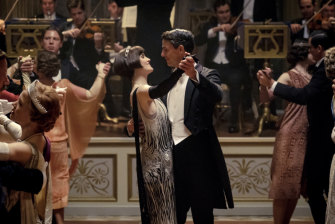 Some of the costuming hallmarks from the series remain. The younger Crawley sisters are typically in colours that play off each other (Lady Edith is the peach to Lady Mary's maroon, or the turquoise to her moody navy) and Cora's soft-sleeved dresses have stood the faux test of time. But an evolution was plotted to show who each woman would have become.

"By 1927 we could see the early influence of the looks we now associate with the Thirties," Robbins explains, adding that the younger generation of characters led the charge. "Lady Edith had become fashion-forward at the end of the series, as she became a working woman in the literary world of London. Now we find her in a different place; she got married and is living at Brancaster Castle. She's left that city life behind but the identity can still be seen in her clothing choices – the cloche hats and relaxed coats."

Lady Mary, meanwhile, has an even more striking angular bob than she did before, affording Robbins the chance to experiment with the era's most fabulous flapper details. "We found a signature style of dress for Lady Mary as we entered the Twenties on the show; striking and feminine without being pretty. Her dresses are linear with geometry to the embroideries to play off that shingle bob. Michelle [Dockery] has loved making the most of her craze for the Twenties trends." 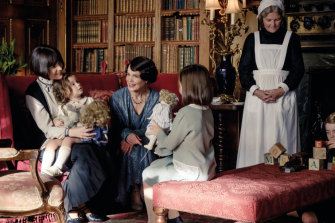 Many of the stars of the TV series have returned for the film version of Downton Abbey.Credit:Universal Pictures

The one Lady whose style doesn't falter is Violet's. "That hem, it doesn't rise," Robbins laughs. "We don't see her ankles. Violet will always be Edwardian, but her fabric choices do move on. You have to imagine that a woman of this stature would have her clothes made by a couturier." In the film, she adds, "the colours she wears evolve alongside a very important part of her story". 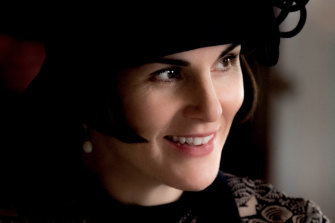 Michelle Dockery returns as Lady Mary Talbot, sporting an angular bob that made the most of the fashions.Credit:Focus Features

The return of Downton Abbey strikes at an interesting time for fashion. When the show first aired in 2010, it rode high on the wave of Great Gatsby style mania and its rich costume drama felt new and delicious. The show inspired trends for decadence; Marc Jacobs to Burberry designed collections riffing off the British aristocracy. Ralph Lauren even opened his catwalk show to the theme song, such was the hysteria for Downton in the US.

In 2019, we're in a different place – there is an impending swing towards Nineties' minimalism, and a drive to be more sustainable and less "adorned". For Robbins, the way to tackle the mood-shift was authenticity. 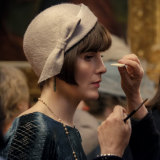 Michelle Dockery has make-up applied during filming on Downton Abbey the film.Credit:Universal Pictures

"For the film I sourced incredible vintage pieces from dealers all over the UK," she says. "People got in touch to tell me about dresses that they had that were from the era. Some things I restored in my workroom, or altered. Our actors are all very leggy compared to the people of the Twenties. Laura [Carmichael] wears originals so well, they fit her frame like a glove," Robbins continues. "But there's a peach, beaded, asymmetric dress that Lady Edith wears, for example, which was an original 1927 dress, but would have been too short for … a royal visit. I created a slip to drop that hem."

Many pieces, particularly for Lady Cora, are conjured up by Robbins and her team. "A beaded blouse on Cora may be completely made from scratch, but it appears in the same scene as an original Twenties embroidered dress of Lady Mary's," she says. "The Queen, too, is an amalgamation of vintage fabrics – her skirt contains a piece of silver lamé that belonged to the real Queen Mary. Anything that was new needed to sit next to things that were old and look cohesive."

One area that Robbins had a little extra help with was the jewellery. Three antique diamond tiaras were lent to the project by Bentley & Skinner, official royal tiara maker.

"The film has been an amazing opportunity to use tiaras because all of our women are now married," she explains. "We were loaned them, but that meant that the replica jewellery needed to stand up on quality next to a handful of carats, glittering away on Violet at the side of the dance floor."

Jeweller Sophie Millard was tasked with creating pieces that mimic a real royal suite worn by Elizabeth II. "For Queen Mary, I wanted to replicate jewellery that the audience would recognise," she says. "We've recreated the Cambridge emeralds. It's a beautiful set – tiara, necklace, brooch, earrings and bracelet – and it's pretty impressive."

So there's a real diamond foliate tiara from the Victorian era for Lady Violet, a nine diamond-set fleur-de-lis from 1890 for Lady Edith, and an Edwardian tiara with eight carats of rose-cut diamonds for Lady Cora. Plus the Queen's extravagant set. Might the typically contrary Lady Mary be doing her famous eye roll somewhere, miffed at her comparably understated bling?