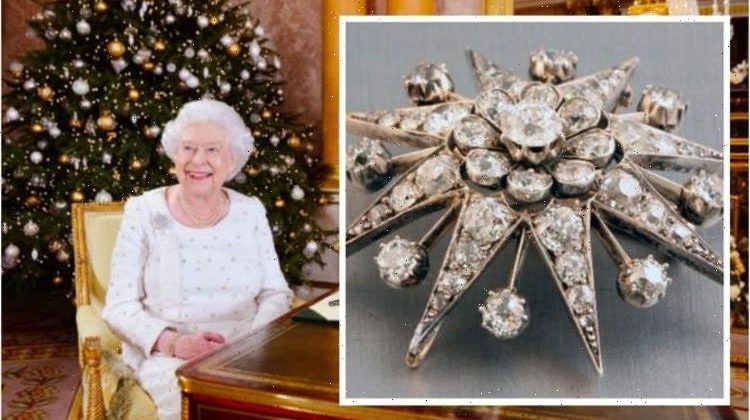 The Queen only began broadcasting the Royal Christmas Message on television, however, in 1957. It always airs at 3pm in the UK having been filmed in advance usually at Buckingham Palace. Due to the coronavirus pandemic, in 2020 it was filmed in Windsor Castle. Each year for the Queen’s message on Christmas Day Her Majesty wears a very special brooch which usually has a sentimental meaning.

As well as the sweet sentiments behind the jewellery choice, the Queen’s brooches are more often than not very expensive.

Christmas day comes with a number of traditions and for many Britons this includes sitting down after Christmas dinner to watch The Queen’s Christmas Day broadcast.

For many it is an annual tradition that is followed every year.

Whilst the Queen herself is the star of the show, her dazzling brooches often steal some of the limelight.

From diamonds to rubies and sapphires to pearls, each year royal fans get another glimpse into the extravagance of her collection.

The Queen has an impressive collection of brooches worth millions.

But what royal fans see on Christmas Day is just a very small selection of the Queen’s entire brooch collection.

Anthony French, Diamond expert at Austen & Blake, spoke to Express.co.uk about the Queen’s choice of brooches over the last six years and provided an estimated value of each.

The most expensive brooch of the last six years was Her Majesty’s brooch from Christmas Day in 2017.

In 2017 the Queen wore a familiar piece for her broadcast, The Jardine Star Brooch.

Like many pieces in the Queen’s jewellery collection, this brooch was also passed down from The Queen Mother.

Anthony said: “It is thought the Queen Mother was gifted this symmetrical piece by a Lady Jardine in 1981.

“This silver and diamond brooch has a collet diamond on a knife-wire between each of its eight points and has an estimated value of £170,000.”

The second most expensive brooch was the Prince Albert brooch worn in 2019.

In 2019, the Queen wore a brooch that has made its way through five generations of the British Royal Family, The Prince Albert Brooch.

Anthony continued: “Originally gifted to Queen Victoria by Prince Albert the day before their wedding in 1840, and finally ending up with the Queen following the Queen Mothers death in 2002.

“The designer of this brooch remains unknown, however, many experts believe that Albert commissioned London-based jeweller Garrard to create this spectacular jewel.

“Set in gold is a large sapphire surrounded by 12 round diamonds, this piece is likely worth at least £30,000.”

The third most expensive brooch was the Queen Mother’s Aquamarine Art Deco brooch worn in 2015.

On Christmas Day 2015, the Queen appeared on her annual broadcast wearing a diamond and aquamarine brooch that she inherited from the Queen Mother following her death in 2002, however, the stunning art deco piece is thought to date back to at least the 1930s, according to Anthony.

He added: “The brooch is set with both diamonds and bright blue aquamarines and is also thought to be able to separate into a pair of clips.