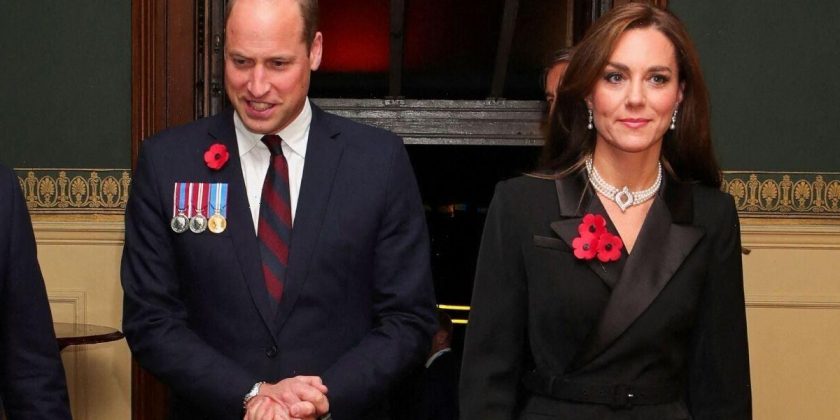 The event also paid tribute to Her Late Majesty, Queen Elizabeth II, who served in World War II as a teenager. It was the first time the Royal Family appeared altogether in public since her funeral in September.

Among the senior royals in attendance was Prince William, who wore a classic black suit with a poppy and his service medals.

However, the Prince of Wales opted for a striking red and blue tie which he had also worn during previous remembrance services.

The tie was, in fact, the regimental tie of the Household Division and this was a touching tribute to the Blues & Royals regiments, whom Prince William served with.

Poignantly, the father-of-three has worn the same tie to the Festival of Remembrance every year to honour those he served alongside.

If royal fans wish to purchase the silk tie to look like Prince William, it will only cost them £33 from the Regimental Shop.

Prince William’s tie has been handmade from higher-grade silk, as well as slip-stitched and adequately lined.

Royal fans may wish to have the luxury gift-wrap option, which would cost a further £6 to have the garment presented in a Regimental Shop gift box.

Prince William was not the only senior royal who hid subtle tributes within their outfit.

His wife Kate Middleton wore her signature three poppies on the lapel of her Self-Portrait black dress.

Although not confirmed by the Palace, the poppies are believed to honour the three brothers of her great-grandmother – all of whom were killed in action during the First World War.

She also wore a pearl choker and matching earring set gifted to her by her late grandmother-in-law, Queen Elizabeth.

The stunning four-strand choker was a favourite of the Queen as well as Princess Diana during the 1980s.

It was worn by the current Princess of Wales to the late monarch’s funeral, as well as Prince Phillip’s funeral back in 2021.

Princess Anne, 72, also stepped out with her husband Timothy Laurence at the Festival of Remembrance on Saturday.

The Princess Royal wore a three-strand pearl necklace and some simple pearl earrings.

Pearls are traditional jewels for the Royal Family to wear. Tobias Kormind, managing director of Europe’s largest online diamond jeweller 77 Diamonds previously spoke to Express.co.uk about the history of pearls within the Royal Family.

He said: “Pearls have traditionally been connected to mourning, ever since Queen Victoria wore only black and pearls after the death of her husband.”

The 72-year-old Princess accessorised with two brooches on Saturday, as well as three poppies. One of these brooches was navy blue and featured the Imperial State Crown, a clear nod to the Royal Family.

Princess Anne wore three poppies most likely as a mark of respect to those who died during the First World War and other conflicts.