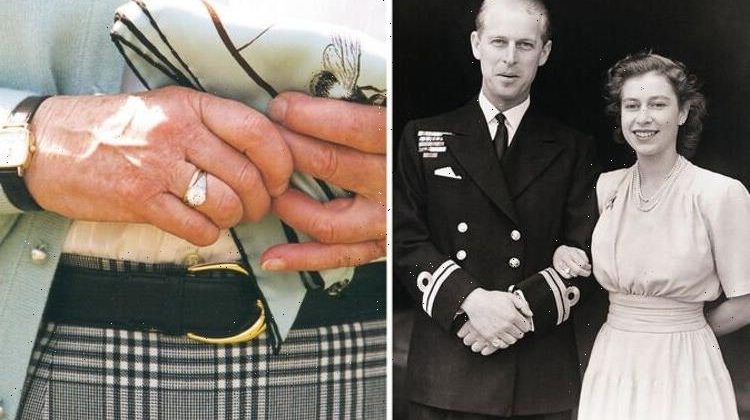 The future Queen Elizabeth II and Prince Philip got engaged almost 75 years ago, and then-Princess Elizabeth was given a dazzling ring by her husband-to-be to mark the occasion. The Queen was widowed in April 2021, but she continues to wear the stunning ring today as a tribute to her late husband.

The Queen’s engagement ring has a central diamond estimated to weigh three carats, and it is flanked by 10 smaller pavé diamonds.

Philip was born a Prince of Greece and Denmark, but his family weren’t very wealthy when he proposed to the future Queen.

But Philip made sure the Queen’s engagement ring was extra special by using diamonds from a family heirloom for the ring.

Prince Philip designed the Queen’s engagement ring himself, and he also included a special tribute to his mother, Princess Alice of Battenberg.

“For the design, he opted for an extravagant round-cut diamond sitting in between two clusters of smaller diamonds – a timeless choice.

“The stones were set into beautiful bright platinum, choosing nothing but the best for the future Queen.”

The tiara Philip had dismantled for the Queen’s ring was thought to have been given to Princess Alice as a wedding gift by Tsar Nicholas II and the Tsarina Alexandra of Russia, upon her marriage to Prince Andrew of Greece and Denmark in 1903.

The Queen’s engagement ring was made by Philip Antrobus of London on Bond Street.

And with the remaining diamonds from the tiara, Philip also had a special bracelet made.

Philip gave the Edinburgh Wedding Bracelet to the Queen as a wedding gift, and she has been pictured wearing the piece throughout her reign.

When Elizabeth and Philip married, the engagement ring was joined by a Welsh gold band that is thought to hold a top-secret inscription.

Royal expert and biographer Ingrid Seward wrote in her book Prince Philip: A Portrait of the Duke of Edinburgh: “At least Philip didn’t have the expense of a wedding ring, as the people of Wales supplied a nugget of Welsh gold from which the ring as made.

“She never takes it off and inside the ring is an inscription. No one knows what it says, other than the engraver, the Queen and her husband.”

Like many royal men, Philip didn’t wear a wedding ring, and Prince William also decided not to do the same when he married Kate Middleton in 2011.