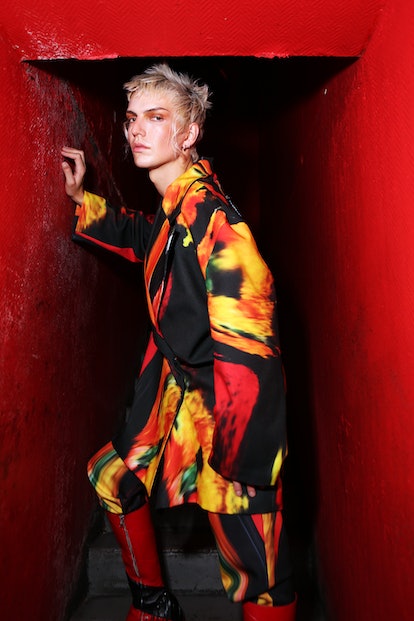 One of this year’s most exciting Paris Fashion Week shows took place inside a dimly lit club in the heart of Pigalle. Earlier this month, the label Pressiat showed its spring 2022 collection—towering models, performers, and artists walked through flashing strobe lights in garments that resembled Victorian Goth armor from the future: raw-edge blazers, off-kilter kilts in neon pink, puff sleeves with layered leather, and draped gowns. Given the aesthetic and the location, it’s no wonder the designer runs in the same circles as Goth icon Michèle Lamy, who knew him from Manko Club, a Parisian cabaret that closed its doors in 2019.

Pressiat, which is now only in its second season, was founded by Vincent Garnier Pressiat, who wanted to put gender fluidity at the heart of the label. “I don’t want a garment to define a genre, I want it to be a unit and if we want to wear it, it’s quite possible,” he says. “I like the idea that femininity can be shown in men and vice versa. Clothing is an expression of oneself—we should not be blocked because clothing defines a genre. All my clothes are designed for all genders.”

For the spring 2022 show, which took place at Le Rouge club—a space decorated by Baroque turrets and spiral columns—Pressiat gleaned inspiration from gypsies across several communities, freedom and travel, and Stevie Nicks during her Fleetwood Mac era. References to glam rock, Mick Jagger, and the band The New York Dolls were also peppered throughout the collection in the form of draped, oversized shapes, leotards, bell bottoms, and of course, sequins.

Backstage at the Pressiat presentation.

Backstage at the Pressiat presentation.

Pressiat graduated from the Chambre Syndicale de la Couture Parisienne, and worked at John Galliano, Maison Margiela, Saint Laurent, and Balmain, before launching his own house. The designer says he wants to make garments for “Sensitive men who wish to show the part of femininity in them, as well as women with a conqueror look.”

“At Margiela, the influence of detail and the history of clothing inspired me me,” he says, detailing what he learned at some of the most prevalent fashion houses in Paris. “At Saint Laurent, a sense of Parisian elegance, and at Balmain, volume and ornamentation as well as the commercial aspect of the clothing.”

There’s no denying the rise of gender fluidity in fashion, but in the highest echelons of the fashion world, it may be seen less than it is on the streets. Out of all the shows in Paris during fashion week, there were only a handful of labels—Vivienne Westwood and Raf Simons among them—that experimented with blurred gender lines for spring 2022. That’s part of what makes Pressiat so intriguing: by mixing traditional codes of the Victorian era and those of the ‘70s, both of which were eras of deeply hyper-gendered styles, he is recontextualizing historical silhouettes into today’s high fashion society.

A look from Pressiat’s spring 2022 collection.

Sculptural leather blazers give the shoulders an entirely new form, for example, while corsets contort the wearer’s shape into a look many have become eminently familiar with, as the corset style skyrockets into ubiquity. “The Victorian era is a source of endless elegance, it inspires me a lot,” Pressiat adds. “Whether it is for men or women. For this season, that’s a lot to carry over into the props and austerity that you can find during that time.”

Some staples of Pressiat include gossamer thin “lingerie” tees with angular hook and eye closures jutting down the front; corseted, sharp-shouldered skimpy suit jackets; leather trousers with corset-tie closures throughout the legs, and stiff leather vests with point shoulders, dubbed the “evil gilet.” If these names spark joy within you, that’s intentional. “I would like people to retain eccentric elegance with a touch of humor and feel strong and confident,” he says. “I like the idea that you can feel like armor in my clothes, that you are untouchable, but sensitive.”