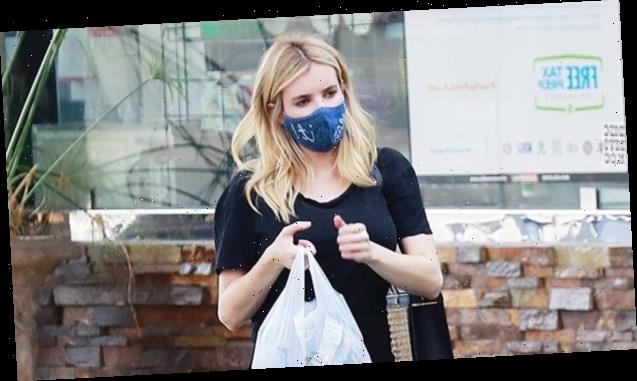 Emma Roberts is continuing to keep a low profile amidst her reported pregnancy, and she carefully covered her stomach with a grocery bag while out and about on Aug. 17.

As Emma Roberts has yet to confirm her pregnancy, she’s continuing to hide all signs of a baby bump. The actress stopped by a gas station in Los Feliz on Aug. 17 and left the store with a full plastic bag. With the paparazzi in sight, Emma held the bag right in front of her stomach as she made her way to her car following the pit stop.

Emma kept a low-profile for the outing, wearing an all black outfit and going makeup-free. Of course, she also rocked a protective face mask amidst the coronavirus pandemic. Emma is currently expecting her first child with Garrett Hedlund, according to a June 25 report from Us Weekly. However, the couple has not confirmed the news themselves at this time.

This is not the first time that Emma has made a point to hide her growing stomach recently, either. The day after her pregnancy news broke, Emma was photographed at LAX with Garrett. She wore a baggy black t-shirt for her casual airport style. Then, over July 4th weekend, she wore another oversized black tee while out and about.

Emma and Garrett were first linked following her split from ex-fiance, Evan Peters, in 2019. Although they are not public about their love on social media, the couple has been photographed in public together a number of times.

Emma’s relationship with Garrett comes after years of ups and downs with Evan. They first got together in 2012 after starring in the movie Adult World together. Following Emma’s domestic violence arrest in 2013 (which Evan didn’t press charges for and the pair later labeled as a “misunderstanding”), they were engaged by 2014.

Emma and Evan’s romance was on and off before they finally ended things for good in 2019. He briefly dated Halsey after the split. Meanwhile, Garrett previously dated Kirsten Dunst after meeting on the set of On The Road. They were in a relationship from 2012 until 2016.