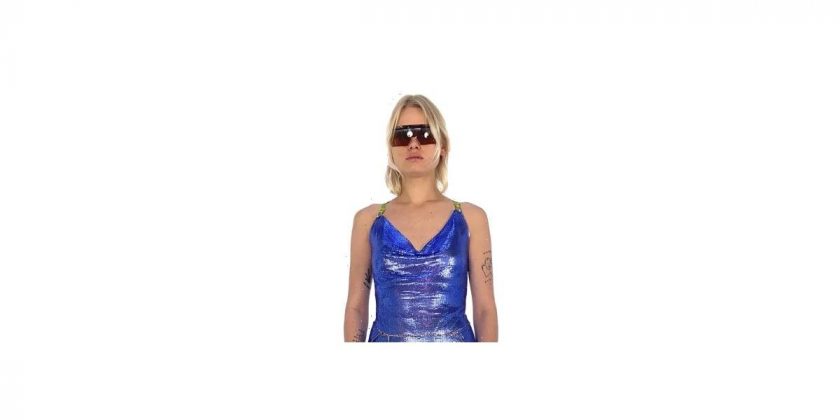 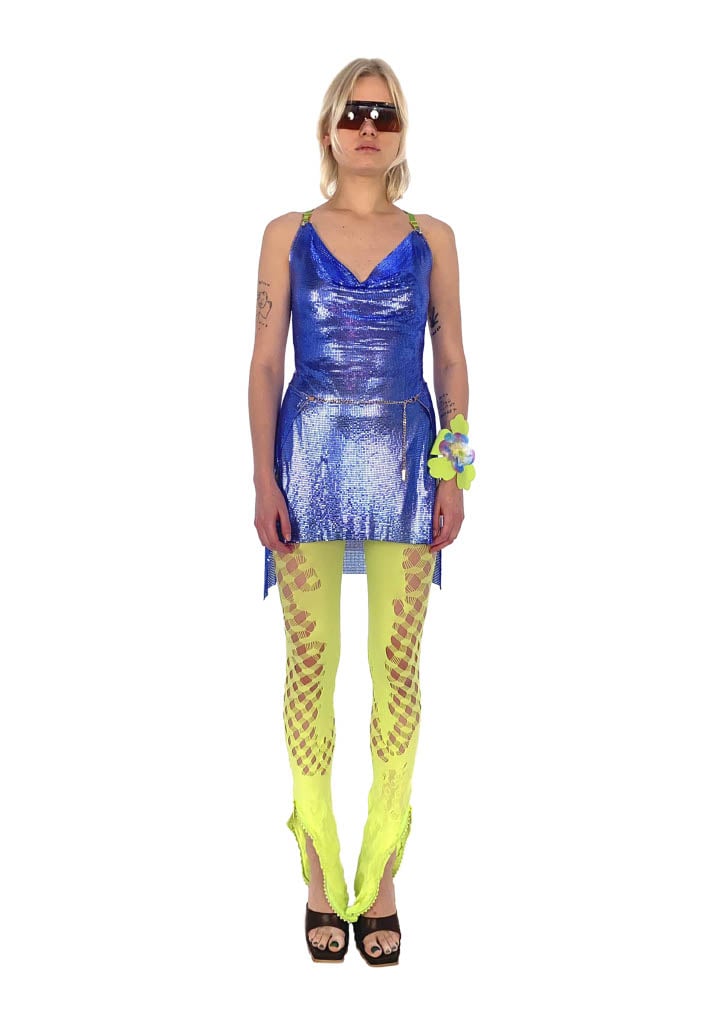 When fashion girls all over slip into their party dresses for the weekend (or an Instagram snap), you’re bound to spot a few key pieces in common — and it’s often the tell-tale sign of an It-brand. Currently reigning in this particular department is Poster Girl, The London-based, party-perfect, fun-first ready-to-wear brand behind the wardrobes of nearly every other fashion girl to hit a dance floor this year. The coveted brand has all the ingredients of a viral success: equal parts innovation, trendiness, and not totally unaffordable, with a celebrity backing from the likes of Kylie Jenner, Dua Lipa, Doja Cat and more. The fashion collective all but unanimously dubbed night-out attire the biggest overarching trend of the year, and Poster Girl designers Francesca Capper and Natasha Somerville were poised to meet the moment.

While it may seem like the brand cropped up overnight, Poster Girl launched back in 2017, when the idea came to Francesca ahead of a big night out: “We were getting ready and it was like a lightbulb moment — ‘why are we not doing a brand together!?'” Capper tells POPSUGAR. “Naturally, we wrote the ideas on the back of a receipt and started designing the following morning – hangover included.” At the time, they were both graduated from Central Saint Martins where they met and often worked together, and were then doing their own thing (Capper, a stint at Christian Dior, Vivienne Westwood and Alexander Wang; and Somerville at John Galliano, Bvlgari and Jeremy Scott) before giving into the magnetic pull that begged them to join forces again.

Take a page out of Poster Girl’s virtual archive, and you’ll see Capper and Somerville know well how to deliver experimental designs while remaining true to their aesthetic. The brand launched with an emphasis on chainmail, a textile the designers manipulate expertly (their early collections included zig-zag hemmed skirts, ruched tops, and even embroidered chainmail designs). While similar styles remain a huge Poster Girl trademark today, its inventive shapewear-inspired designs have since become the brand’s hero pieces. In most cases, shapewear is synonymous with undergarments – meant to be hidden, and devoid of much detail. At Poster Girl, “shapewear” is separates and bodysuits created to be worn on their own, complete with cutouts, swirly lace details, and heart-shaped embellishments as buttons. For Capper and Somerville, the idea stemmed from a trip to a few sex shops near Moulin Rouge when they were interns in Paris. “We were obsessed with the little outfits that were displayed in boxes, like fishnet bodystockings and cutout mesh sets,” Capper says. “The only problem was they were far too risqué and not suitable to be worn anywhere outside the bedroom.” So when the first COVID lockdown hit in London, the duo went on a mission to develop supportive, body-contouring pieces that could be worn when it was time to head back outside. “It was like being stuck in the house in loungewear and something to look forward to,” Capper says.

It was two of these shapewear styles along with Poster Girl’s Jessica Dress that Kylie Jenner would don on Instagram at the top of the year after her stylist sent in a custom order, that would set the brand up for unprecedented momentum. “We really weren’t expecting her to wear three of our outfits in a row,” Somerville says. “Things definitely went crazy for a while.” A flurry of It-girls have flocked to the brand since, from Megan Fox to Sofia Richie, but the brand has actually been a cool-girl cult favorite since its early days, even if slightly more under-the-radar. Dua Lipa wore a chainmail set from Poster Girl just a couple of months after its 2017 launch, and has become a longstanding fan of the brand, spotted also a in red chainmail dress and a shapewear jumpsuit. Most notably, the pop star wore the label’s pink Miranda Dress for her Future Nostalgia (The Moonlight Edition) album cover. Meanwhile, Doja Cat fans will remember a pink Poster Girl chainmail dress spotted in her “Say So” music video. “We will never stop obsessing over [her] [wearing Poster Girl] to the line ‘He ain’t never seen it in a dress like this,'” Capper says. 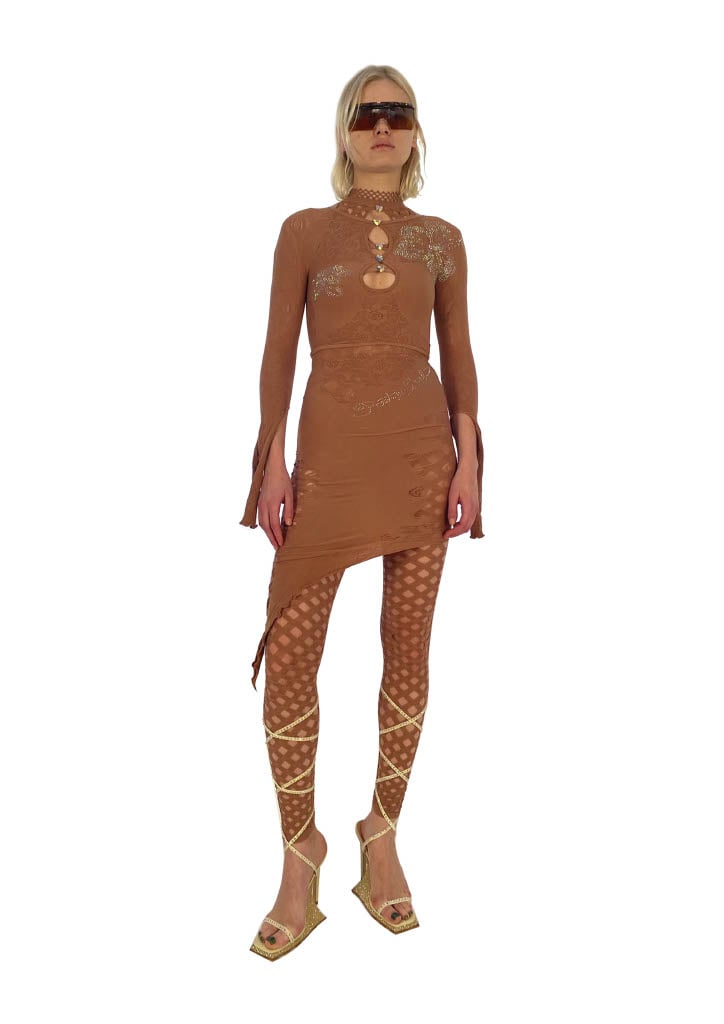 Just when it seems that the label might have peaked, the upcoming spring/summer 2022 collection — which was introduced with a virtual fashion show — builds onto the hero styles that old and new fans alike have come to love, and offers even more than they might have expected. The designers flew in models from all over the world for the two-day shoot. “We used a treadmill to get some of the shots which wasn’t as simple as it sounds,” Capper says. “Especially with our models wearing high heels and latex stockings”; but any technical difficulties would have been overshadowed by the clothing itself.

The collection, which launches early next year, welcomes a number of new categories, rounding out the brand with separates to take the eclectic dresser beyond a night out. It’s Capper and Somerville’s first stab at shoes. Additionally, the collection zeroes in on blazers and sees an evolution of its trousers. More familiar styles to the brand also receive updates; shapewear dresses and biker shorts appear now with large, fishnet-like cutouts. Then, there’s a series of latex: latex tights, flared pants, a blazer, and a latex dress, following the silhouette of the brand’s fan-favorite Miranda Dress. According to Somerville, working with the textile was no easy feat, but it was made feasible with her experience at a London-based latex brand during school. “It’s always exciting to see a variation and range in a collection, so as we grow we really want to keep exploring new ideas and possibilities,” she says. And while it’s near impossible to know what’s to come (Capper says she and Somerville can be inspired by anything from a cavewoman from the Ice Age to a 1980s raver), Poster Girl seems to have found a promising home for as long as fashionistas keep dancing.