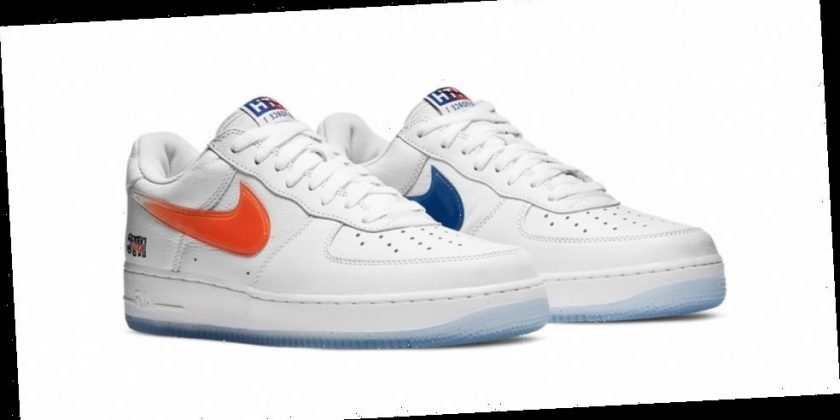 It’s been a busy week for KITH: after the Ronnie Fieg-helmed brand unveiled its Fall 2020 collection and new MLB collaboration, official images of its Nike Air Force 1 “NYC” collaboration have surfaced. One of two co-created pairs slated to release this fall, KITH and Nike‘s latest Air Force 1 Low is a crisp homage to the Big Apple with details seemingly inspired by the New York Knicks and/or the Queens-born Fieg’s hometown New York Mets.

Boasting a “White/Rush Blue/Brilliant Orange” color scheme, this Air Force 1 offers city-centric summertime accents atop its white tumbled leather build. The most notable of these are a duo of unique Swooshes — orange on the lateral side, blue on the medial side — that are made of a glossy plastic material and slightly fade towards the heel, finishing in a clear point. Tongues and insoles alike take on a special co-branded KITH/Nike hit, with a gradient fade that’s almost reminiscent of Andre Agassi‘s Air Tech Challenge II “Clay Blue.” Moving to the rear, Nike Sportswear heel embroidery has been modified to read “KITH Air.” On the lower half, crisp white midsoles and icy blue outsoles round off the look.

The KITH x Nike Air Force 1 NYC is set to release later this fall alongside a “Black/Team Orange/Rush Blue” colorway, though an official date of arrival and retail price have yet to be confirmed.