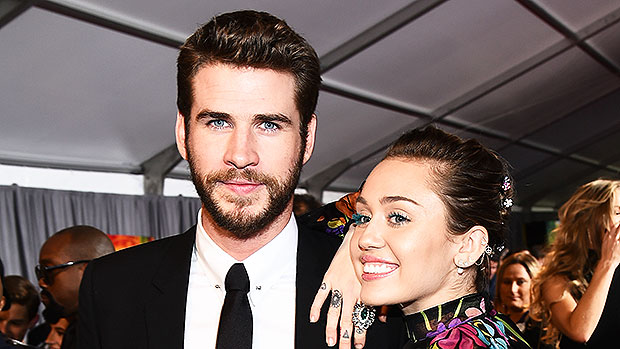 Miley Cyrus and Liam Hemsworth secretly tied the knot on Dec. 23, and now, we finally have our first glimpse at her simple but stunning wedding dress! The gorgeous bride wore an off-the-shoulder gown for the low-key ceremony, and shared the first full-length photo of the dress on Dec. 26. In photos posted to her Instagram page, Miley and Liam can be seen hugging as they embrace their first moments as husband and wife. To complete her look, Miley wore her blonde hair in loose waves, swept to the side in a glamorous ‘do. Of course, Liam looked super handsome in his tux, too.

Speculation that Miley and Liam had gotten married began on the morning of Christmas Eve, after fans noticed one of their friends post a suspicious photo and video. In the vid, Liam’s brothers, Luke and Chris Hemsworth, could be seen taking shots and cheering, while the camera also panned to balloons in the background that read ‘Mr. and Mrs.’ Meanwhile, the photo showed Miley and Liam in their wedding ensembles, gearing up to cut a cake, with her mom, Tish Cyrus, nearby.

This wedding has certainly been a long time coming. After all, Miley and Liam first got engaged in June 2012! However, a little over a year later, they devastated fans by ending their relationship in Sept. 2013. By Jan. 2016, though, rumors that they had gotten back together began after they were photographed spending New Year’s Eve together in Australia. After that, Miley started wearing her engagement ring again, and it wasn’t too long before they were full-on public with the relationship.

Since the reconciliation, the happy couple has sparked wedding rumors plenty of times — especially since Liam started wearing a band on his left hand! However, it wasn’t until the end of 2018 that they FINALLY decided to make it official, and we couldn’t be happier for them!