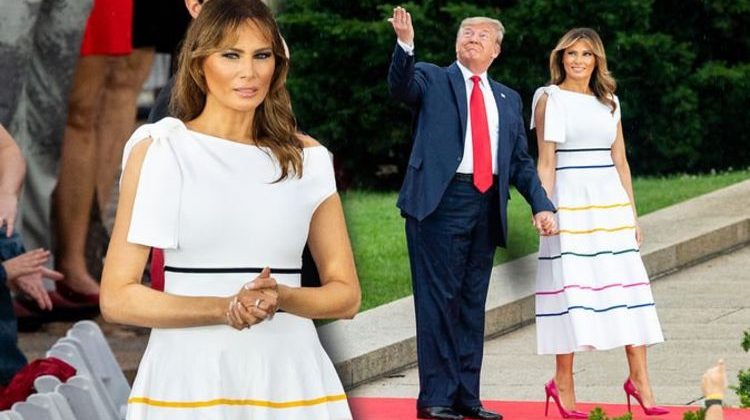 Melania Trump, wife of President of the United States Donald Trump, 73, was at the US leader’s side during the country’s Independence Day celebrations. The pair marked the event in front of the Lincoln Memorial, on 4 July 2019, in Washington D.C, with Melania  opting for a pretty white dress with horizontal coloured stripes. The gown, designed by one of the First Lady’s favourite fashion icons Carolina Herrera, was subject to an unfortunate malfunction when the top half appeared see-through, exposing her chest. Yet other eagle-eyed Melania fans have noted her choice of rainbow attire – worn at the same time as the country’s Pride celebrations – may have been a subtle nod to LGBT rights.

One took to Twitter to muse: “Interesting. Melania has on a white dress with multicoloured stripes. Gay pride? She’s a rebel.”

Another put: “@FLOTUS supported #Pride with colour stripes in her dress!”

A third continued: “@FLOTUS wore a dress with rainbow stripes, and it’s not the first time she has worn rainbows during Pride.”

Another disagreed, and posted: “Melania Trump’s hideous dress had nothing to do with gay pride! It was an old lamp shade.”

One then insisted it was “just a dress.” 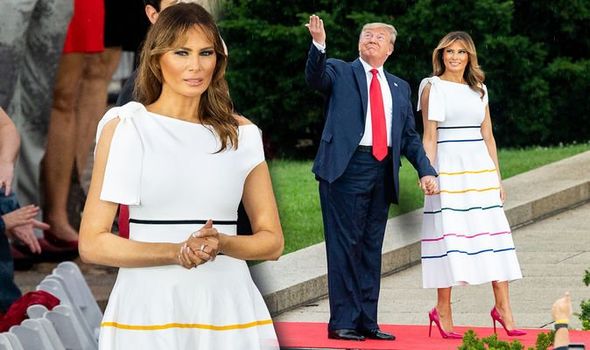 Yesterday, Express.co.uk reported how the First Lady of the United States seemed not to have realised her white top was see-through, meaning her chest was on show.

Just last month, Melania spent an eye-watering £12,000 on outfits for her visit to the UK with her husband, President Donald Trump.

Within seconds of photos emerging, fans flocked to Twitter, with many comparing her choice of clothing to a “wet shirt” contest.

“Braless? In a white dress? In the rain? Who thought this was a good idea?” one user asked. 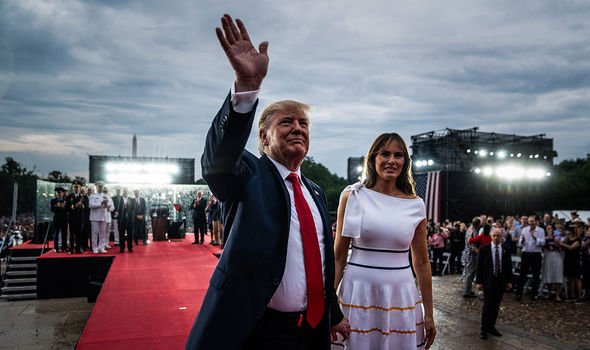 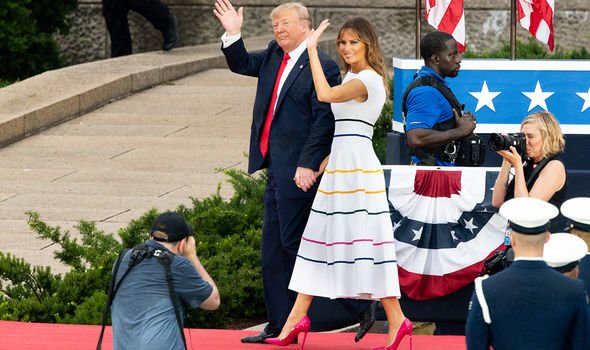 Donald has previously spoken out about others, who have made the same fashion faux pas, which didn’t go unnoticed by fans.

Previously, Melania and Donald visited the UK from 3 June to 5 June as part of a three-day state visit.

During this time, the couple attended events with members of the Royal Family, including Queen Elizabeth II, and the Prime Minister Theresa May.

For the occasion, the US First Lady had a suitcase full of chic outfits and her wardrobe over the three days totalled a whopping £12,652.