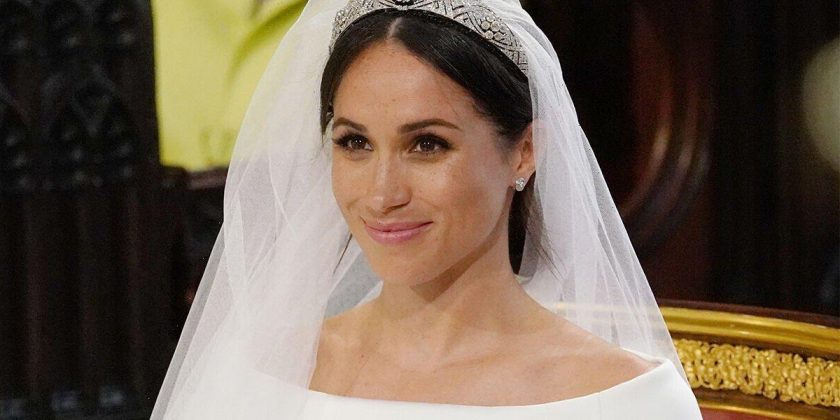 Prince Harry and Meghan Markle wed in a stunning ceremony at St George’s Chapel, Windsor nearly five years ago, and as per royal tradition, the Queen lent the bride a tiara from her personal collection. Meghan opted for a lesser-known diadem, Queen Mary’s Bandeau Tiara, which has a fascinating history.

When she became Duchess of York (upon marrying the future King George V) in 1893, she was gifted a stunning diamond brooch by the County of Lincoln.

The brooch features brilliant diamonds arranged in a circle, with the largest of the 10 stones placed in the centre.

In 1932, Mary had a bandeau tiara crafted to accommodate the brooch in the centre, and today it can still be detached and worn separately.

The tiara “is formed as a flexible band of eleven sections, pavé set with large and small brilliant diamonds in a geometric design”, according to the Royal Collection Trust.

Queen Mary was pictured wearing her bandeau tiara on a few occasions, but it wasn’t a firm favourite of future queen consorts and princesses.

Queen Mary’s Bandeau Tiara got perhaps its most famous outing in 2018 when the Queen lent it to Meghan for her wedding day.

In a recording accompanying an exhibition of her wedding outfit at Windsor Castle, Meghan described her wedding tiara as “surreal”.

The Duchess of Sussex said: “When it came to the tiara on the day, I was very fortunate to be able to choose this gorgeous Art Deco style bandeau tiara.

“Harry and I had gone to Buckingham Palace to meet with Her Majesty The Queen to select one of the options that were there which was an incredibly surreal day as you can imagine.”

She continued: “That was the one that I think as we tried them on stood out.

“I think it was just perfect because it was so clean and simple – and also to that point, an extension of what Clare [Waight Keller] and I had been trying to do with the dress which was something that could be so incredibly timeless but still feel modern.”

Queen Mary’s Bandeau Tiara may have had its royal wedding debut, but its sister tiara is still thought to be sitting in the royal vaults waiting for its next outing.

Queen Mary’s Diamond Lozenge Tiara is “a low, sleek kokoshnik-shaped tiara made of diamonds set in a lozenge pattern and topped with 13 pearls”, according to the Court Jeweller.

The tiara can also be worn without the pearl toppers for a more demure look.

The stunningly simple diadem was later worn by the Queen’s sister Princess Margaret to Queen Juliana of the Netherlands’ inauguration celebrations in 1948.

The tiara hasn’t been seen for decades, but it could be worn by the next generation of royals like Princess Charlotte or Lilibet Mountbatten-Windsor.

Queen Mary introduced several of the royal tiaras we see today including the Lover’s Knot Tiara worn by Kate, Princess of Wales and Queen Mary’s Fringe Tiara, which the Queen wore to marry Prince Philip in 1947.

Mary also gifted the Girls of Great Britain and Ireland Tiara to the Queen when she married, and it went on to become one of her favourite diadems.

Mary also purchased the Grand Duchess Vladimir Tiara, a hooped diadem that can be worn with pearls, emeralds or ‘widowed’ with no gems that the late Queen adored throughout her reign.