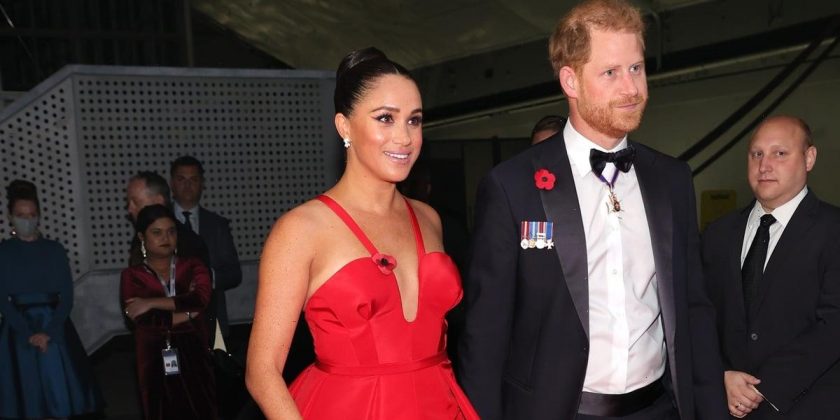 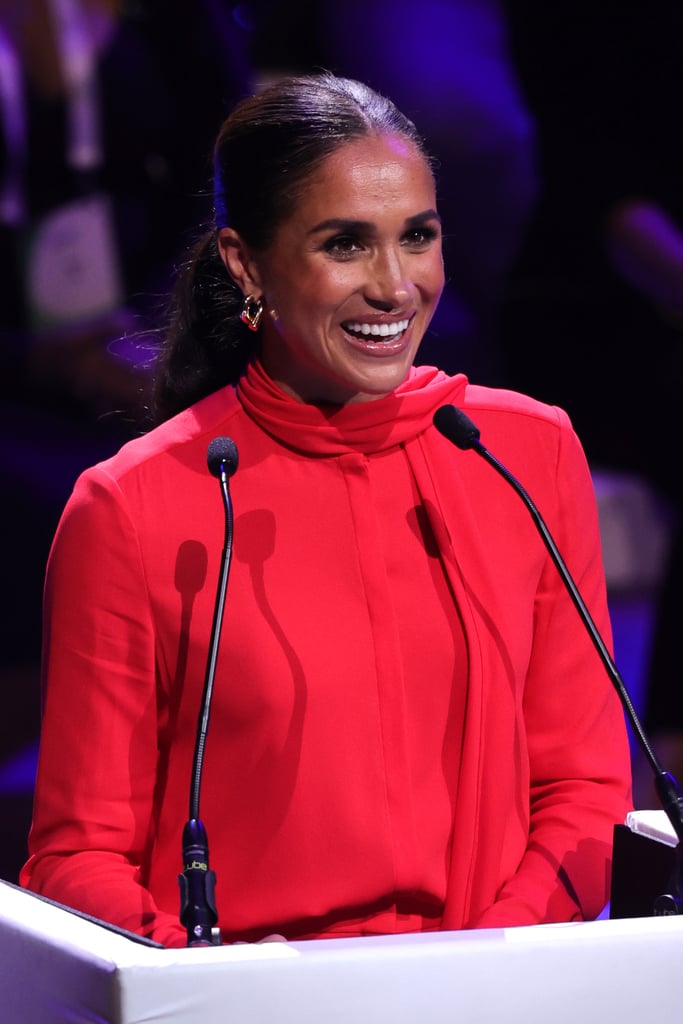 In a set of newly-released portraits, Meghan Markle and Prince Harry shared a behind-the-scenes look at their recent trip to the UK. On Oct. 3, photographer Misan Harriman posted two images of the Duke and Duchess of Sussex that he took earlier this month at the One Young World Summit’s opening ceremony in Manchester, England. For the occasion, the 41-year-old “Archetypes” host and mom of two wore an by the brand Another Tomorrow: fiery straight-leg trousers made from merino wool and a coordinating long-sleeved blouse that featured classic cuffs and a scarf that she wore draped over her shoulder. Embracing the monochromatic trend, Markle opted for head-to-toe red and the bold color palette may have a special significance.

Over the years, red has become a clear power color for Markle. In November 2021, Markle marked her return to the red carpet after relinquishing her roles as a working royal in a floor-sweeping red Carolina Herrera gown. In March 2020, when the Sussexes were wrapping up their royal duties at the Mountbatten Festival of Music at Royal Albert Hall in London, they coordinated in bright red ensembles: Prince Harry in his crimson Royal Marines officer’s uniform and Markle in a scarlet red Safiyaa cape gown. Based on the timeline of events, could Markle be signaling that red is her go-to hue in this new chapter of her life? Red often symbolizes action, energy, passion, and strength, so it makes sense that she’s choosing the color to channel these themes through her wardrobe.

To no one’s surprise, due to the “Markle Sparkle,” the red blouse has already sold out in all sizes, but it’s still available in an assortment of other colors. The red pants, however, are still in stock in select sizes.

Markle wore the all-red outfit to deliver a keynote speech at the event. “My worldview had expanded exponentially seeing the global community through the eyes of my child,” she said in her remarks. “And I would ask, ‘What is this world he would come to adopt?’ and ‘What can we do, what can I do, to make it better?'”

In the other image taken by Harriman, the Sussexes are captured in black and white, holding hands and looking off camera. According to Harriman, who has been a frequent collaborator with the couple, the snapshot was from “moments before” the opening ceremony began.

Ahead, shop the exact pieces Markle wore for her latest post-royal public outing.