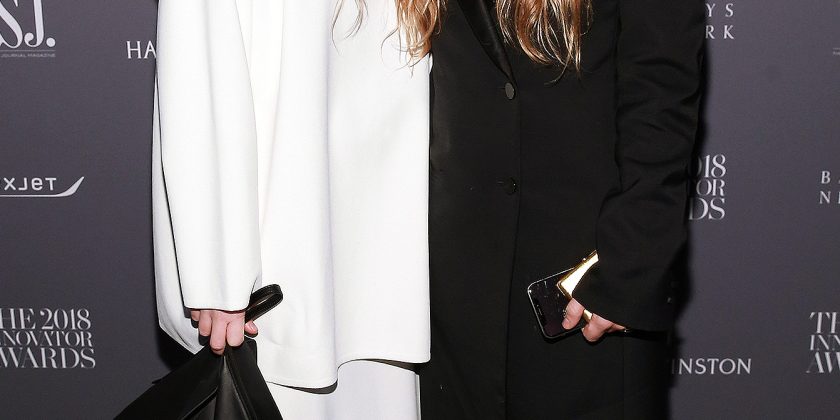 Mary-Kate and Ashley Olsen made a rare red carpet appearance together on Wednesday night.

The twin sisters, 32, stepped out in New York City to attend WSJ Magazine‘s 2018 Innovator Awards at the Museum of Modern Art to support their close friend Jonah Hill who was honored with the Film Award.

Dressed in contrasting black and white outfits, they both looked glam as they posed for photographers. Mary-Kate wore an oversize tuxedo black coat and matching trousers, which she accessorized with red snakeskin boots. Ashley, meanwhile, paired her oversized white shirt and skirt with black heels and coordinating bag.

Each kept their wavy hair down and parted in the middle (a signature Mary-Kate and Ashley look, ‘natch). Mary-Kate added coral-colored pendant earrings, while Ashley didn’t appear to be wearing any jewelry.

The sisters joined Hill at his table, and during his acceptance speech he thanked them along with the rest of his friends and family members for being innovators that he also admires.

The fashion icons and former child actors recently spoke to WSJ. Magazine about their relationship as sisters and business partners for the launch of The Row’s first menswear line.

“We do everything together,” Ashley told WSJ in the interview, published in August. “We came out of the womb doing that,” Mary-Kate added.

Both described their relationship as a “a marriage and a partnership.” Like most long-term couples, they “have had ups and downs,” Ashley shared, adding, “It’s been 32 years of learning how to communicate.”

RELATED VIDEO: Mary-Kate Olsen on Her Normal Life with Husband Olivier Sarkozy: I Have Two Step Kids, I Have to Go Home and Cook Dinner

While Mary-Kate and Ashley have been in the spotlight since babies —playing the same character for their breakout role as Michelle Tanner in Full House — they lead notoriously private lives. “I don’t know if it’s because of the way we grew up — we just don’t like talking about ourselves or talking about what we’re doing … It’s not really our approach,” Ashley told the WSJ.

Occasionally they reveal how they truly feel about each other, like they did with InStyle back in 2016. At the time, Mary-Kate called Ashley “loving and consistent,” while Ashley returned the compliment with: “You are the most grounded, brutally honest and compassionate person … and my best friend.”

Meanwhile, Mary-Kate has been married to French banker and half-brother of former French president Nicolas Sarkozy since 2015. Ashley used to have a 58-year-old financier beau, Richard Sachs, but she was last seen out with a new mystery man in November 2017. The twins have four other siblings: younger sister Elizabeth Olsen, older brother Trent, and half-siblings Courtney Taylor and Jake.